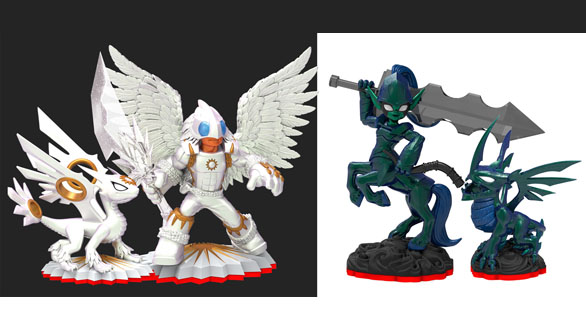 If you’ve kept your kids (or your 30 year old spouse) who play Skylanders away from the internet this week, it will completely stun them to see the new Skylanders Light and Dark element packs under the Christmas tree next week. With unprecedented timing (at least not that I can recall) Activision has announced the release of two adventure packs at Toys R Us tomorrow which include new Trap Masters of the new elements each. Both actually include their trap key as well! Two new dragons have also been announced by Kotaku, as seen above, but they will be available separately. I’m not sure if they will be released tomorrow or not, but the expansion packs with new level and trap master will be.

So who are these new trap masters? Read on for more!

Knight Light and Knight Mare are the new Skylanders. One of which has an armored humanoid bird form, and the other a dark armored centaur respectively. They each come with their own adventure pack style level. The story goes that these two trap masters were protectors of Skylands long ago. Yes Knight Mare was a protector, despite that whole dark side thing. Thanks to the traptanium that destroyed Cloudcracker Prison, it also unleashed the two new elements.

Again, these are first being released at Toys R Us (for $30 each it seems, one set for light, one for dark). So if you do want to try for one tomorrow, that’s where to go. Hopefully there will be lots available. After all, the release date is clearly a way to add one more special gift to your Christmas list. It would make sense for many to be available instead of this being a rare release. Here’s to hoping, and good luck out there if you decide to go looking tomorrow. Stay safe and Happy Holidays!