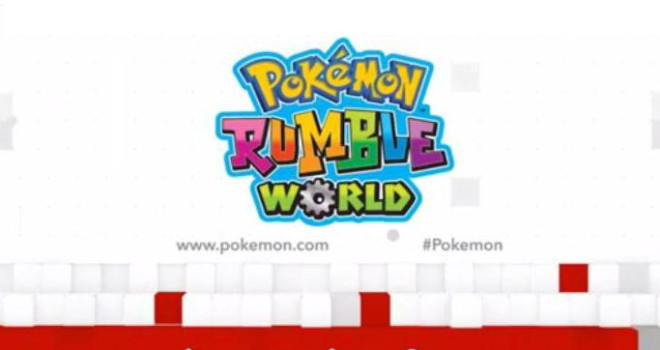 That’s a good way of putting it isn’t it? Free to start. If you like, you can put some funds into Pokémon Rumble World which was released today as a free download on the Nintendo 3DS. What is it? Quite a fun little title actually! Especially if you’ve never played a Pokémon Rumble title before, here’s a great point to give one a go.

Following in the footsteps of Pokémon Shuffle, Rumble World is the second title to feature Nintendo’s “Free To Start” model of gaming. So far, I’m really enjoying this theme! Sure it’s a tease in Pokémon Shuffle when you use up five plays and have to wait for your hearts to recover so you can play more, but on the same token, it’s free. If you’re hardcore into the game, you can pay to play more. Otherwise if you just play it as a casual app, it’s not so bad.

So far, Pokémon Rumble World has been pretty generous. The intro lets you play around quite a bit and the more hot air balloons you own, the more times you can go out and beat up toy Pokémon in the hopes of capturing more. It sounds like once you reach rank five that changes. The game works on the aspect that your hot air balloons need to be reinflated. So you need to wait for that, or pay a premium in Poké Diamonds, the currency used by both games as the payment method that you can also sometimes earn. Later, it seems balloons will take longer to reinflate, but you can also purchase a few of them too.

While it can seem frustrating to see a model like this being applied to Nintendo games by some, it’s also free games for all of us that we can enjoy. Pokémon Shuffle even has special daily goodies like being able to battle against a new Pokémon each day, perhaps things like that may even come to Pokémon Rumble World. This sort of live feature adds to the game and keeps it’s longevity up. Instead of just sitting on a shelf in hopes that someone will buy it down the road, gamers can share about it with their friends and we can all get in on the action. Odds are if you really enjoy the game and spend some cash to buy Poké Diamonds, you’ve probably invested some good time in the game anyway.

Think of these two titles as an app game. They’re fun! But they’re like something to have with your breakfast and then forget about for several hours. It’s like a Nintendo game to visit with.

On top of all this, you choose one of your Mii characters to have as your human adventurer (well bipedal at least, we’ve seen some of the crazy Mii characters out there). You can even buy clothing for your Mii and in the hub world outside of the kings castle, you even see them running around. I haven’t seen too many animations yet, but they do seem to have a bit of life to them. You actually play as your chosen toy Pokémon but can change on the fly and even capture Pokémon just by attacking them and being lucky to get them as a drop. Usually you get coins for each Pokémon you defeat. The game is very much an action title which spans through little corridors of arenas which are split into a few areas in a level. These lead to a boss battle with constantly spawning additional support Pokémon of a similar type. I’d always thought that Pokémon Rumble was just about arena battle, and perhaps the earlier titles were. This is quite neat.

To be able to download the game for free and dive right in, it’s quite a great title to pick up! Pokémon Rumble World is available in the Nintendo 3DS eShop right now!