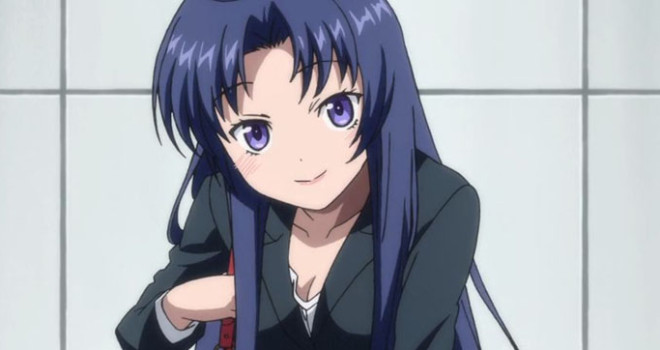 It’s been a little while since we’ve rambled about any anime so it’s about time we got back on topic! In my spare time I’ve been poking at more episodes of NIS America’s release of Ground Control to Psychoelectric Girl. I haven’t wanted to say too much after the series hit it’s stride and proceeded further into character development now that we know the main cast. However, episode eight stands out as an interesting divergence from the series. Naturally, if you’re not up for spoilers, you should probably stop reading now.

This episode features Meme as the main star and has a bit of overlapping flash back to earlier episodes as well as her childhood. After the recent resolution in episode 7, it felt odd at first seeing a recap. As the story progresses though it becomes clear that this episode details a lot of Meme’s character and really brings her to life instead of just being the flirtatious aunt we’ve seen until now. Sure she’s had her moments, but this episode really brings out the inner child in this forty year old character.

Really, this whole episode brings a lot of what we know about Meme into question. She really comes off as an over the top flirt and we don’t really know where she draws the line. Is she just a crazed anime character who has the hots for her nephew, or like with most of this series, is their a realistic explanation to this interaction. Maybe she realizes Makoto can be teased and tormented so easily and she’s just having fun with it. It feels awkward to say, “Oh she’s just joking around!” in a case like this, but after all we’ve all seen some pretty crazy anime.

She’s clearly quite complex and her whole focus in this episode seems to be to make her mother happy again. Not that I’m sure as seen earlier that this isn’t something that Erio can enjoy. Really this chapter of the series gives a stronger manga feel to the story. Going off on a side tangent is a good side trip once you get used to what the episode is about and it further shows that this is a developing story and not a tale that follows a formula.

I’m very interested to see where the series is going. Being in the final stretch really leaves things open still. Makoto and even Erio now have two good friends, both of which could be love interests for Makoto. Not that Meme has really put the notion of Erio herself even being a love interest despite them being cousins. Meme more so has made it clear that she’s protective of her daughter, and not that Erio and Makoto shouldn’t be together for any other reason than that. It’s interesting really since the sort of vacuum universe this series exists in with these few characters feels quite realistic in a friend circle kind of way. Makoto isn’t that outgoing so his whole world exists of just these few people.

Will this series stay true to form and develop as a realistic series, or will there be a ground breaking twist into the finale? I’m not sure which I’m rooting for. On one hand, having a fantastical ending that shows all of their ideals Erio and her family have about the world being proven true would be interesting. However I was happy to see Erio turn out to be a shy and troubled girl who is being brought into the world by her cousins understanding and care. After so much anime in the 80’s and 90’s I guess I’m just used to the out there sort of answer that this is almost feeling like an M. Night Shyamalan movie without a twist. You expect it so much that when it isn’t happening it’s the biggest unexpected development of all.

You can order your own copy of Ground Control to Psychoelectric Girl from the NIS America Store.