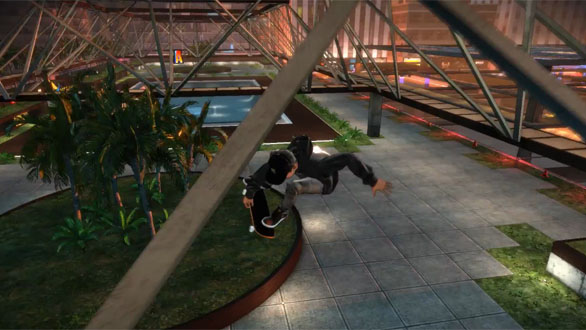 With just over a month to go, we’re getting close to a brand new THPS game release! The latest trailer adds a mix of skaters together to reveal the cast list for THPS5. It’s great to see familiar faces from the skating world being added into the series yet again!

We’ve seen a good mix of the level content so far as well, but it’s still unclear what areas will be featured. Two that I’ve seen mentioned are School 3 which is seems to be a modified version of School 2, the classic from THPS2. Also it seems Hangar and Warehouse will return as a combined level known as Bunker. Otherwise I’m not sure what the above area is from the latest trailer. From what I can gather it seems to be some sort of rooftop level. I don’t remember it from previous games. Much of the content as looked like skate parks, which is understandable of course. Even back in the classic games there were competition levels that took place in build up parks. Who can forget how incredible some of those were? Part of the fun of Tony Hawk games has been the more realistic or quirky areas you can shred up. Skate Heaven alone was something else. It looks like there are a mix of spots in this title as well. I’ve included a video below the trailer that shows some raw footage sent to X7 Albert on YouTube by Activision. If you have Chrome, I’d recommend viewing it in that since you can see how the game looks at 60fps (which I assume is for the Xbox One / PS4 version only, not sure though). The additional video shows a really good spread of the areas instead of just tricks like most of the trailers do.

So without further ado, here is the behind the scenes trailer:

The following is raw footage showing off some of the areas in the new game: