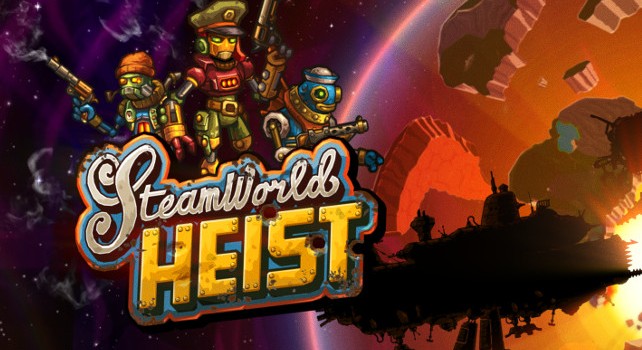 Okay so I’m a bit late to the game with this even though I’ve been following their development progress since playing their previous game. I did one preview piece just over a year ago when Image & Form first teased SteamWorld Heist, but since then I’ve merely been reading their releases and anticipating the new game.

Their series really began with their first title for the Nintendo DSi. This DSiWare title was called SteamWorld Tower Defense and is one I have never played, though has peaked my interest since I played and loved their second game. I’m of course referring to SteamWorld Dig, of which you can browse through my review here.

The first game was a tower defence game, the second one was a platforming action adventure game, and the third one is a turn-based strategy game. Varied game styles within the same series is great to see. And the art style and music within Dig was outstanding, and upcoming Heist is looking to be just as grand.

SteamWorld Heist is a game about space adventures and strategic shoot-outs. Play as Captain Piper and recruit a team of rag-tag robots to explore and scavenge the remains of a destroyed world. Board enemy spaceships and command your crew in a unique variety of turn-based combat, where the outcome is determined purely by your own skills.

The fellas over at Image & Form has put out a little behind the scenes video where they talk about the series, answer questions and provide a sneak peek into the upcoming game. You can view that below.

There is no definitive release date for the game yet, but is noted to be releasing on the Nintendo 3DS eShop in Fall 2015. The game will also be released on Steam, PlayStation 4, PlayStation Vita, Xbox One, Wii U and mobile platforms.