9 Ways To Revitalize The Skylanders Franchise 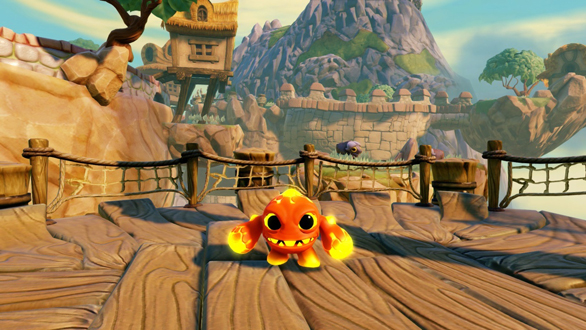 It’s scary news seeing a Toys to Life series like Disney Infinity come to an end. Especially after Skylanders fans have heard that Supercharger sales aren’t up to expectation. The franchise has a lot of life left in it and I only hope we will see the changes needed to keep it going. Following is my advice for what I’d like to see.

Skylanders is a series I’ve enjoyed for a long time now. In the beginning it was easy to even laugh at. We had characters with names like Eruptor and Whamshell that at the time sounded silly. As time went on though and you got into playing the games, you came to treasure these members of your team. Now, so many years later we’re about to move on into the sixth Skylanders game. Obviously the concept took off.

Even other companies began to produce their own toys to life games. Disney Infinity, amiibo, and LEGO Dimensions joined the ranks of NFC figure titles. The concept was popular and very lucrative. But how can that keep going?

Over the past few years, Skylanders has skirted with disaster and come out on top. All of the games themselves have been fantastic. It’s the gimmicks that were horrible nightmares for both wallets and as risky maneuvers. Trap Team began this with the trap key toys. Basically they were a physical Pokéball like item that you could use on the games portal device that works as the real world figure reader. Through them you were able to capture villains in game. The issue with this is the concept was very light to carry over into the follow up game. At most I think it applied a skill or weapon to Supercharger’s vehicles. As soon as I saw them, the trap keys were cringe worthy. They were made to make money, and make money alone. Well, duh. But they’re just meaningless plastic. They’re not figures. Sure they looked okay, but if we had Skylanders Villains instead and sold all those enemies as figures instead that actually unlocked something, that would have been much more collectable.

Vehicles were the next awkward mix into the series. Yes, you could swap out your vehicles for land, sea, or air to take on different side areas in each level, but that’s where the fun ends. The story kept this whole gimmick together and the games intro and ending driving tie in was satisfying. Aside from that, the vehicle parts got awkward. When you have something basically like an NPC yelling at you that, “Oh no Skylander! You better have a water vehicle or no one will save my friends!” I’m sure created the occasional awkward moment where Moms across America went to the store so little Billy would stop crying about the background characters in peril. The vehicles were cool and well designed. They also added a small area that seemed unique to each vehicle, but that’s still something I need to confirm. If so, that’s something the series has needed since Heroic Challenges per character were removed.

The most recent update I’ve seen in Superchargers seems to be a way to pay for in game currency to upgrade your vehicles. A game that basically involves you buying physical DLC having in game purchases like this just seems like the concept is just being overlooked. There is an incredible product here! Unfortunately I don’t know what can be truly done for older Skylanders since massive walls at game stores now have bags of used figures, but an evolution in the series may just save the franchise from fading away. Let’s take a look.

This is possibly the biggest thing that could save the series. We did see the awesome Dragon Spine racetrack in Superchargers and there have been nods to the original series throughout. After all, the initial release was called Spyro’s Adventure. The biggest thing is, fans are desperate for a new Spyro game! The more free roam areas of Spyro are what I feel the Skylanders series would benefit from the most. Look at games like Banjo Kazooie. That sort of exploration would create great opportunity for expansion on the series. It would keep it fresh. The series doesn’t have to stay the same. Mario certainly hasn’t over the years and Nintendo has seen great success through new concepts with the fan favorite plumber. If you need to revitalize Skylanders, make a new Spyro game where the Skylanders help him and bring back characters from that series.

2.) Online Multiplayer On A Larger Scale. Possibly Even MMO.

Kids want to play with their toys. Gamers want to play with their characters. Everyone wants to show off their character. Get some hub worlds and an MMO vibe on the go. Activision has Destiny, a Bungie created game that sees you wandering a free roam world most of the time (or at least on patrols) with other players actively wandering around. Think of the thrill here! Friends are watching the game and someone runs by with the new super rare Skylander character! They’re so lucky! Look at how cool in the game character looks! The game already has hub worlds. Let those overlap and lets see other “Portal Masters” Skylanders wandering around.

In my youth, the most exciting thing ever was the prospect of toys or games that had limitless leveling up. It was a rare thing, and probably something that was never truly realized. Skylanders could have something like that. People grind on Destiny all the time to get the highest level gear. Imagine if Skylanders could level up forever and battle. Maybe you could join one of two kingdoms and have PVP battles against many players. Each player gets a set number of character changes instead of respawns. If you want gamers to keep playing, remove restrictions. That doesn’t mean story level caps need to be removed. Multiplayer level or rank could be a separate thing. It’s not like Destiny really turns you into a beast by letting you gear up anyway. So where do we get these two new sides?

We already saw in Trap Team that Darkness and Light are two new element that have just arrived. Then Superchargers never really mentioned it as a thing. We had “The Darkness” but that was it. Where do Light and Dark Skylanders come from? Do they get along? Is there any connection to their emblems being used in Darklight Crypt or is that just a coincidence of reused assets. Fans ARE invested enough to notice that stuff. Work with it!

LEGO Dimensions allows you to unlock a free roam world with just one character from a new franchise you use. Spyro’s Adventure at least had Heroic Challenges per character. Even if the series continued with these bonuses, gamers would have had reason to get all the characters they could. This ties back in with the desire for unlimited upgrading too since Heroic Challenges gave you character boosts for completing them. Was it a grind if you wanted to beat them all with each character? Of course! But it kept the book from closing on being done everything in the game. With a free roam world, there could even be areas that are blocked off to all but one character. They could even have a unique storyline there. Naturally it would be a monumental task to add areas for previous Skylanders but the new ones could be done. I mean something beyond the side paths that lead to a new hat. That needs to stop. We need rewards and story now.

Game stores are littered with previous generation Skylanders figures. What if those figures had value? Yes, adding content to a new game for every character is insane, but it could send fans into a frenzy of collecting up their old favorites. Where did the back stories go for each character? The games used to have tales about where the characters came from. Expand on that! Imagine this. Eon is thankful for the help of all the Skylanders so he has missions available that let you delve into each characters past to wrap up their storylines or expand upon them. Sure some were just tales of self improvement like

7.) If All Else Fails, Bring Back Spyro’s Kingdom.

What have we discussed so far? MMO? Check. Social Hubs? Check. Potentially more character advancement? Check. Still includes buying toys that you can play with alongside your friends? Check! Why aren’t we funding this! Skylanders players have grown up. This is the way of the future! “Aww I sold all my toys, man that’s so cool! Jim is still playing as a series on Ghost Roaster!” This combines everything I’ve been talking about into an amazing new way to play from everyone’s favorite franchise. The trailer for Superchargers got me excited thinking about areas like Borderlands open deserts and being able to drive around in them. Those… just weren’t in the game. That’s fine, I still had fun. But it really is those changes and free roam that can revitalize the series. These characters are HUGE now. Let us have fun with them.

Take a look at this prototype footage:

“Daddy collects Warhammer figures and has these awesome battles with his friends! I wish I could be like him.” You can little Billy! Imagine if Skylanders expanded to let you use your figures in said battles. You load each one in before battle, spending points to load in your favorites. Not good enough? Okay! Old treasure pieces also work! Add those as buildings to your battlefield to give your troops a boost! Something like this would be so cool! But just like Destiny year one weapons the old figures are so underpowered… what can we do? Buy new figures! This totally keeps with the concept of Skylanders, keeps investors happy with toys being sold, and gives gamers something new to enjoy! Bonus points all around.

One of the things that really rocked in Superchargers was the size change levels. They weren’t based on an element like most Skylanders levels. Instead you were shrunken in some crazy collector girls lawn, giant sized and stomping around a far off kingdom, or even on a farm where tech was used to make giant chickens! This stuff was AWESOME! We need more innovation like that. Whoever came up with those ideas, high five! That was a great addition to the series!

I don’t know everything. For all I know, these concepts could even be in the works! At E3 we could have our minds blown by the announcement of Skylanders Spyros Kingdom as the next release. Skylanders Kaos Tactics could be a new title on the way. Of course those are all made up theories, but we don’t even know what the 2016 Skylanders game will be as of this time.

I just want to see the franchise expand and stay relevant. It’s a great video game series and we need to see these titles evolving.