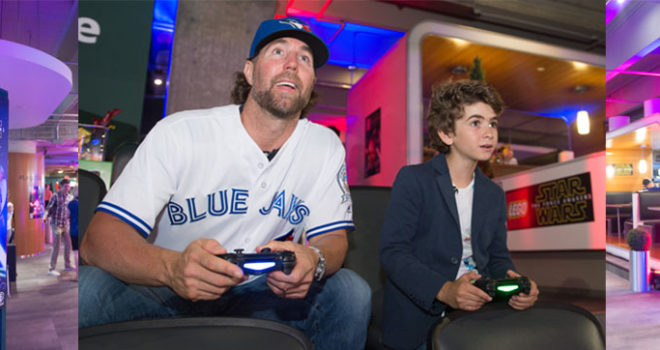 Monday night was nothing short of amazing! As part of a small group of media we were able to visit an exclusive event at The Rogers Center in downtown Toronto. That’s right, the exact field the Toronto Blue Jays play at became a fantastic spectacle to highlight Traveller’s Tales upcoming new LEGO Star Wars release. We entered to the familiar John Williams score, making our way up into the TD Comfort Clubhouse to enjoy an all star treatment while being some of the first in Canada to play the new game.

The view from the top of the stairs was immediately breathtaking. Various booths featured playable demos on mounted screens running on PlayStation 4 consoles Sony had generously donated to the event. A green screen setup allowed visitors to have their photos taken being chased by Lego Stormtroopers. But across the Toronto Blue Jays home field was the crowning achievement of the event, the game being played on the absolutely massive Jumbotron! 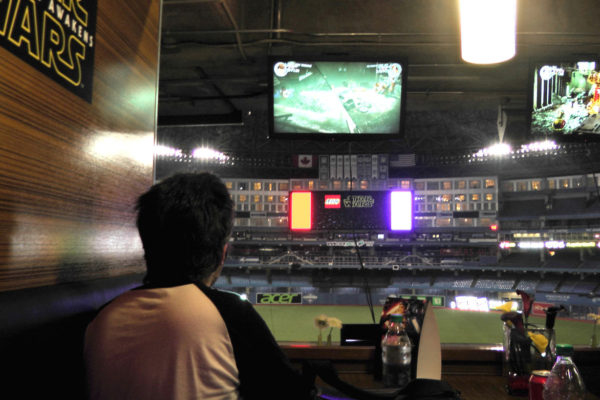 Taking all that in we gathered in the nearby lounge which overlooked rows of seats leading down toward the field. We gathered up some snacks from the generous spread that had been put together for all of us in attendance and sat down to watch some gameplay. For the first bit we enjoyed our ballpark treats and watched as players work together to free C-3PO, Poe, Admiral Ackbar, and BB-8 from a Star Destroyer trash compactor. One of the most notable things is how advanced the Lego titles have become. As the level progresses, the walls of the trash compactor do indeed move when triggered to change things up a bit. The animation for that alone is quite neat. It’s great seeing that Trvaller’s Tales has continued to find new ways to surprise players. I think it was LEGO Marvel’s Super Heroes that first had some really neat scenes like this, not that The LEGO Move: The Game didn’t feature some neat new moments as well. Clearly these eye candy moments are continuing to evolve as LEGO titles continue on. 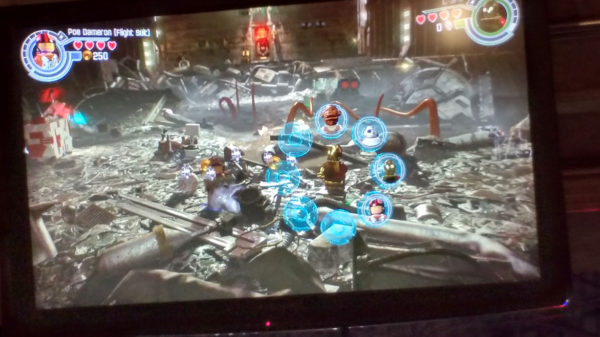 It wasn’t long before a booth opened up and we were able to pick up the PS4 controllers to give the game a go. Poe Dameron seems to be on a mission to rescue Admiral Ackbar from the depths of a Star Destroyer that Captain Phasma even seems to be on! This immediately demonstrated the freedom given to the team. LEGO Star Wars: The Force Awakens is a title to get excited about because of the original content included. Sure, it will be great to play our favorite scenes from the recent J.J. Abrams movie, but this latest LEGO Star Wars release will also include content between Return of the Jedi and The Force Awakens! So if you were concerned there may not be enough content to base a whole game on, there’s no worries there!

The level began with a title crawl much like all the Star Wars films. It read: POE TO THE RESCUE The brave RESISTANCE MOVEMENT struggles in its valiant fight against the dreaded FIRST ORDER. Unaware that the First Order has constructed deadly SUPERWEAPON, the Resistance must now rescue one of its most important leaders, who is being held prisoner aboard an enemy STAR DESTROYER… 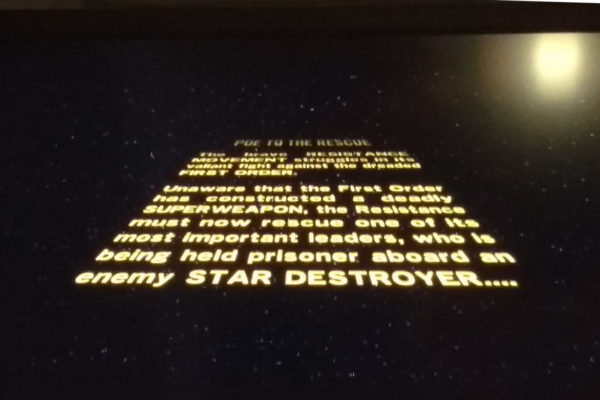 There are some new mechanics involved in this latest release. I’m unsure if any character has been able to dive into specific pools and resurface in others the way Admiral Ackbar does, but that was neat. Sort of like the way shorter characters can use mini doors to get to new areas. If that isn’t new, then Multi-Builds certainly are! We all know that joy of getting a LEGO set and having various instructions to make a couple builds instead of just one. LEGO Dimensions even features that with the vehicles and such that are included in some of the sets. In LEGO Star Wars: The Force Awakens you can actually rebuild objects into other forms. This completely confused us at first, as we might have missed a tutorial about it, but it’s intuitive enough that we figured it out quickly. Basically you lean the control stick toward the outline of the build you want to toss together and then hold circle (on the PlayStation controls) to assemble that object. In the trash compactor level this allowed us to raise a platform to get C-3P0 high up, lower a bridge to help him cross to another platform, and finally raise him to a control panel to aid in our progress. Each time we just had to smash the old build to rebuild it into another form.

We saw some great footage of a daring space escape in Poe’s X-Wing, but we didn’t get to play that ourselves. With so much going on we were quite caught up in all the action of the event. It had been announced that a Blue Jays player would also be joining us! So after a short announcement we had all gathered to be greeted in the actual stadium seating. Everyone was unsure what to expect as we showed our very deep appreciation to our hosts for putting this event together. First we were introduced to the new Chief Play Officer from Toys “R” Us, a young gentleman who reviews toys for an actual child’s perspective. Shortly after meeting him we were stunned to see that the Toronto Blue Jays R. A. Dickey was the guest player! One of the Blue Jays pitchers himself! Needless to say the audience erupted in cheers at his appearance! 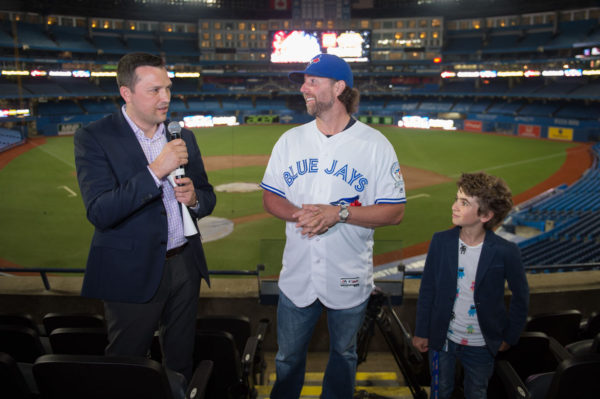 It turns out R. A. Dickey himself is quite the Star Wars fan and he joined Toys “R” Us Chief Play Office to enjoy the demo on the big screen! I don’t know who was playing what character, but both actually seemed to be soaring through the trash compactor quite easily. At least more impressively than our attempts had gone along with many cheers for teamwork. One thing I did note is that the new game does seem quite co-op friendly. Not that other titles haven’t been of course, as that’s the main way I’ve played LEGO Dimensions. It just seems like we were able to cover our ground and figure out what was going on in a good flow. 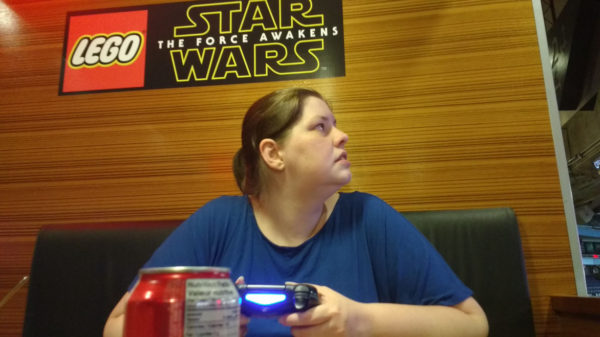 With the game containing new scenes, original dialogue, and fresh content to keep these LEGO games from growing old, it seems that LEGO Star Wars: The Force Awakens will be another amazing addition to the franchise! Naturally the trademark comedy of the LEGO retellings of the franchise stays intact in this addition as well! If you’d like to check it out for yourself a different demo is available on PS4 and Xbox One featuring the desert planet of Jakku. So you can download the demo now and get your LEGO BB-8 gameplay on. 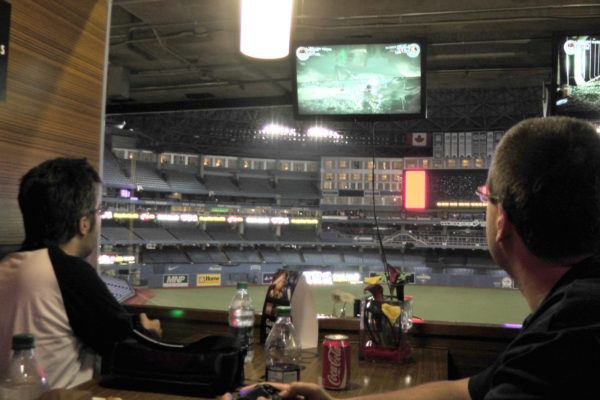 The event overall was the fanfare the game deserves. After all, this is original content set in the Star Wars universe! Next Tuesday’s launch couldn’t be any bigger. It felt fitting that we could see the game being played on a screen that was larger than life, literally the largest in the country! Watching the action unfold across the vast playing field of the Rogers Center was certainly breathtaking. Getting to take a photo together with R. A. Dickey was an incredible additional treat. I’ll certainly treasure our souvenir photo with Stormtroopers chasing us down as well. Last but not least, we all gathered together on the field itself for a group photo. I’m very proud to say I was there for the launch event for LEGO Star Wars: The Force Awakens! We celebrated the next chapter in a franchise that has taken the world by storm. On June 28th, all of us will be able to delve further into the world that George Lucas gave us so many years ago. The Star Wars legacy is continuing, and Traveller’s Tales has built up the bricks of new scenes for us to enjoy. 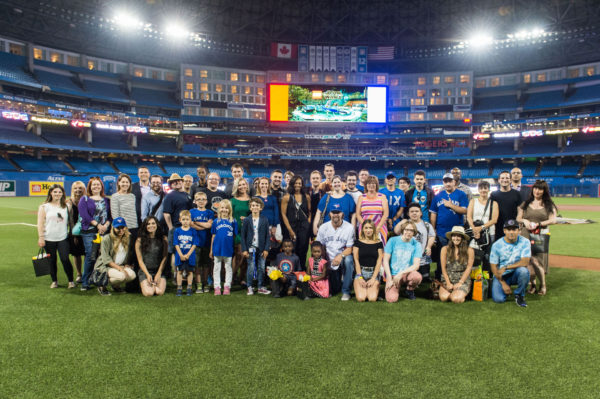 Stay tuned for our continued coverage of LEGO Star Wars: The Force Awakens. We’re certainly eager for Tuesday to get here!

The Force is strong with this one.