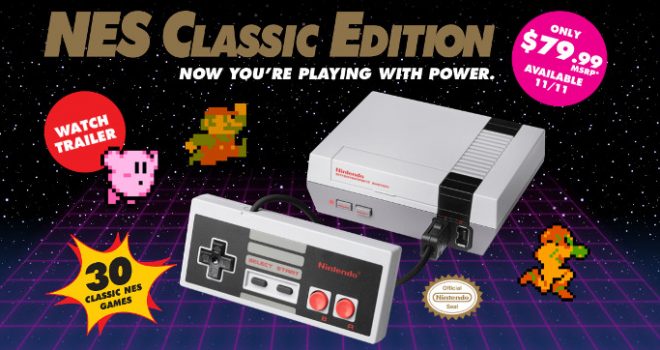 The NES Classic is sure to be the hit of the holidays and Nintendo is fully embracing their 8-bit roots. The company is bringing back some other retro pieces in another blast from the past.

The Nintendo Entertainment System: NES Classic Edition system, which includes 30 classic NES games such as Super Mario Bros., Metroid, Donkey Kong, The Legend of Zelda, Kirby’s Adventure and PAC-MAN, launches on November 11th. But it’s not just the launch of this retro console that’ll see you remembering the glory days of gaming.

On the night of November 10th, fans who visit the Nintendo NY store in Rockefeller Plaza will have a blast in the past with an ’80s-themed launch event. On launch weekend (from November 11th – 13th), Nintendo is also bringing back its righteously nostalgic Power Line for three days only. Plus on November 10th and November 11th, Nintendo’s social media channels will go completely retro to a time when “social media” involved trading passwords and game tips on the school bus.

“Many of us have fond and wonderful memories of the original NES,” said Doug Bowser, Nintendo of America’s Senior Vice President of Sales and Marketing. “With these launch activities for the NES Classic Edition, we want to replicate the nostalgic feelings of sitting down and playing the NES with your family for the first time.”

Nintendo’s old phone tip service the Power Line returns from November 11th to November 13th, between the hours of 9:00 AM to 10:00 PM ET each day. The original Power Line was a beloved service in the ’80s that connected fans to Nintendo Game Play Counselors who offered helpful tips and tricks. In this fully automated version, you can use your real-life phone (bonus points if it has a cord!) to dial (425) 885-7529 to hear recorded tips for several games, plus behind-the-scenes stories from original Nintendo Game Play Counselors. You never know what you might learn!