Nintendo Switch is here to fight with ARMS 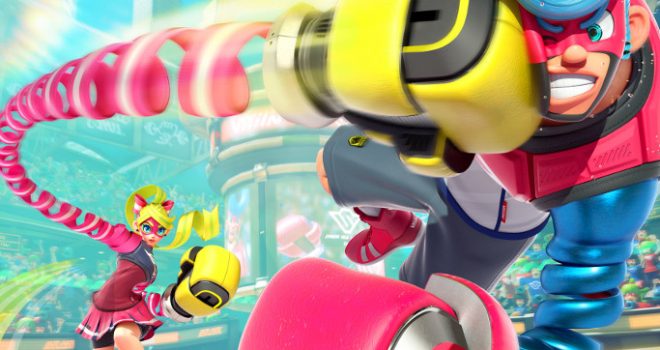 I’ll admit it. I did have a bit of a huh moment when the trailer started for this game. Nintendo tends to do silly little skits when they introduce a new game or concept, but this one was a bit bizare at first. But once it started to show gameplay it made a bit more sense.

ARMS is just as strange at first as I remember Splatoon looking when it was revealed. The game looks weird at first, but then starts to look like it could be a lot of fun.

In ARMS you will choose a fighting champion from around the world, equip your own combination of extendable arms, and then use a mix of button presses and quick hand motions to really take the fight to your opponent. Throw punches and guide them midfiight to hit agile fighters, avoid incoming attacks with dashes, or trampoline high into the air to rain down fists from above. Power-up your punches to deal extra damage or curve your fists around obstacles to hit skittish opponents. Fill up your special gauge to dish out devastating combinations and finish them off. Unleash your inner fighter in this unbelievable sporting event!

Check out some of the features of the game, as well as the box art and some screenshots from the game. The game doesn’t have a firm release date yet, but is planned for a release in Spring 2017