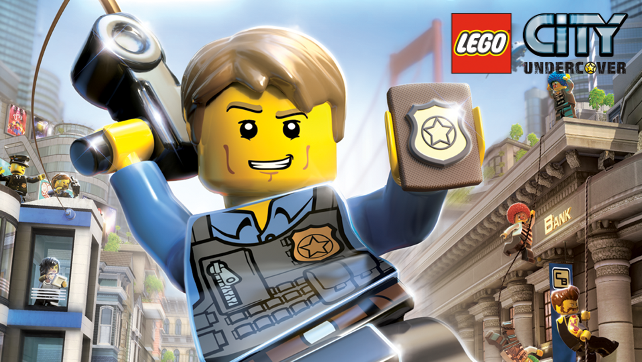 LEGO CITY Undercover – Join the Chase! In the LEGO CITY Undercover game, play as Chase McCain, a police officer who’s been tasked with going undercover to hunt down the notorious – and recently escaped – criminal Rex Fury and putting an end to his citywide crime wave. With two player co-op*, friends can explore a sprawling open-world metropolis, with more than 20 unique districts to investigate, car thieves to bust, hilarious movie references to discover, vehicles to drive and hundreds of collectibles. The LEGO CITY Undercover game brings together witty, original storytelling with signature LEGO humor to create a fun-filled experience for players of all ages to enjoy.
Graceful Explosion Machine – Skillfully pilot the Graceful Explosion Machine, a fighter ship armed with a ludicrously overpowered quad-weapon array. Lost in deep space, you’ll shoot, dash and combo your way through jewel-hued alien worlds, fighting crystalline enemies to find a way home.
Just Dance 2017 Demo – Dance on the Just Dance 2017 free demo. Grab your friends and family because it’s time to Dance. Bring your best moves to dance to Just Dance 2017 hits.

Dragon Sinker – Join forces with elves and dwarves, and slay the evil dragon, Wyrmvarg in a retro-style fantasy RPG! Set out in search of the legendary weapons to free the world from the rule of Wyrmvarg! Employing 8-bit graphics and sound that hark back to the golden era of RPGs, Dragon Sinker brings a visual and audio feast to the table of hungry gamers starving for the nostalgia of the great classics of yesteryear!

Animal Gods – A beautifully illustrated, 2D top-down game with a focus on zen-like journeying, light puzzling, precision-platforming and fallen gods. The Animal Gods have fallen. Once sacred, they are now husks—haunted beasts lost to toxic fumes from a great bronze industry. Play as Thistle, a small & agile warrior hellbent on destroying the curse that plagues these creatures. Wield a 17th century BC Bronze Sword… and set the Gods free.

World Sports Competition – In this TurboGrafx-16 sports game, compete in six categories of events that include shooting, archery, rowing, swimming, and track & field. The game features Olympics mode, where you play all the events over the course of a few days, and Training mode, where you can choose individual events to play. After practicing in Training mode, go for the gold in Olympics mode and break world records.

Super Star Soldier – Super Star Soldier is a classic, vertically scrolling shooting game for TurboGrafx-16. The Special Attack Squad, led by the Mother Brain, has launched an all-out invasion of Earth. Take your small-scale fighter, the Neo Caesar, with its arsenal of four regular weapons and two special weapons, and send the aliens back where they belong.