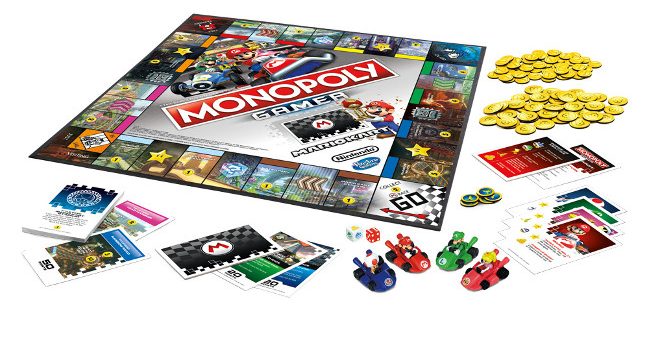 Today marks the launch of the Monopoly Gamer: Mario Kart Edition game. This new MONOPOLY game introduces the fun and competition of Mario Kart through iconic characters and unique gameplay.

The game looks, at least on the surface, to be a reskin of the previously released Monopoly Gamer, which played somewhat like Mario Party. Throughout the game, players will pass – and potentially purchase – iconic Mario Kart themed properties such as Rainbow Road and Bowser’s Castle, while simultaneously encountering familiar challenges like dodging Banana Peels, tossing Shells and scooping up Super Star spaces to win the game.

To introduce another layer of competition and strategy, landing on or passing “Go” triggers a Mario Kart race where players compete for the coveted Grand Prix card. In addition, each character token will have its own unique Power-Up ability activated by landing on a Super Star board space.

“In 2017, our fans were excited to see Mario and Mr. Monopoly join forces, so it’s only fitting we continue this collaboration with another franchise favorite – Mario Kart,” said Jonathan Berkowitz, Senior Vice President of Global Marketing for Hasbro Gaming. “The game will integrate iconic elements of Mario Kart into the Monopoly game, offering a one-of-a-kind experience for gamers across the globe.”

“Mario Kart is a franchise cherished by fans of all ages,” said Tom Prata, Nintendo of America’s Senior Vice President of Strategic Initiatives. “Expanding our partnership with Hasbro to build upon the fun of Monopoly Gamer offers families even more surprising and engaging ways to interact with Nintendo characters.”

Monopoly Gamer: Mario Kart Edition game is available at select GameStop stores in the United States now, however it is not yet available at EB Games in Canada.

The game will be available at other U.S. retailers in June.

The release from Nintendo says that the MSRP will be set at $24.99, though the Gamestop website has the game listed for $29.99. In addition, much like the original Monopoly Gamer, there will be “Power Packs” available for $2.99 each. These power packs include additional Mario Kart character tokens such as Bowser, Rosalina, Shy Guy, Metal Mario, Donkey Kong and Yoshi. Both offerings will be available globally in August.