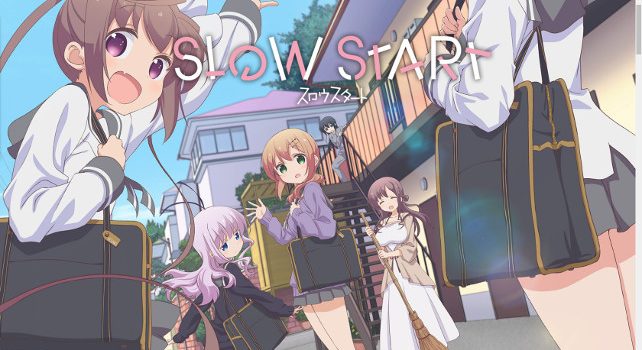 There are probably more anime series out there than the average person thinks. Unless you’re someone who actually seeks out and watches anime on one of the many online streaming sources, most people would be surprised about how much variety is out there. But there is a lot.

As I’ve said before, when I’m looking to jump into a new series I work on the superficial. Because I don’t want to get any spoilers on what to expect in a series before I start the first episode, I mainly look at the artwork in the poster to decide if I like the way the “look” of the anime. And included in that aesthetic appeal I’ve been trying to pick series which contrast previous picks.

My latest pick is Slow Start, a series that is now streaming on CrunchyRoll and just wrapped up its 12 episode run at the end of March. It is an adorable little series about four very different girls starting high school.

Hana Ichinose has enrolled in high school one year late due to studying to get in. It might not seem like a big deal, but it is to her. She’s off to a slow start, but she wants to work hard and catch up to everyone else. Hana is a very shy and introverted girl about to start high school in the spring. After moving away from her parent’s house in the city due to unforeseen circumstances, she decides to live at an apartment managed by her cousin, Shion. A new school, new life, and new friendships. As Hana gradually opens her heart to the people around her, her life begins to unfold with exciting and cheerful moments. From playing around like children to feeling anxious like an adult.

One thing that I love about Slow Start is that it’s a simple slice of life story. It’s four girls in their first year of high school getting through together. The stories and events that happen are cute and fun, while there isn’t any larger story going on. There aren’t any supernatural threats, no magic or mystical events taking place. It’s a simple story.

The art style of Slow Start was something new for me. The focus of the characters seem to be very large and bright eyes. This adds to the look of the anime, and also adds to the innocent nature of the girls and the series at large. Each of the four main girls in the group also have different coloured eyes.

There is a little bit of fan service early in the series as Hana’s cousin Shion is, let’s say well endowed, but after they get little bit of the jiggles out of the way, Shion settles in as a solid secondary character. She acts as somewhat of a big sister and also as a motherly figure to Hana while still giving Hana a lot of independence.

All four of the girls have very different personalities which all mesh well into a cohesive group. Hana is very self-conscious and timid. Eiko is a gentle, level-headed girl. Kamuri is a petite and childlike girl. Tamate is a bubbly, cheerful girl who makes friends with everyone she meets.

Slow Start gets off to a titular slow start but easily finds its own and is a relaxing series to watch. The series ran for 12 episodes and just completed its first-run. The whole series, which is based on the long-running manga, is now available to stream on CrunchyRoll. All episodes are still available for free, but the first episode goes Premium as of April 21st.

Slow Start is both a cute and fun series.