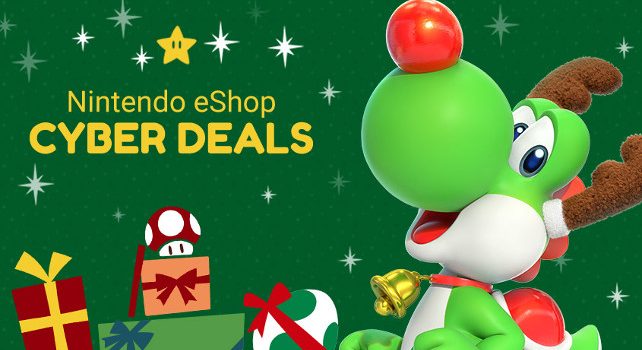 In addition to the holiday shopping fans may be doing for loved ones this season, they can also treat themselves to a wide selection of digital games with this year’s Nintendo eShop Cyber Deals sale.

Starting right now and running until November 28th at 11:59am ET, the Nintendo eShop Cyber Deals promotion offers up to 50 percent off the digital versions of select Nintendo Switch and Nintendo 3DS games.

“Nintendo eShop is an excellent way to discover new games and explore a vast catalogue of Nintendo Switch and Nintendo 3DS games,” said Doug Bowser, Nintendo of America’s Senior Vice President of Sales and Marketing. “The Nintendo eShop Cyber Deals are the perfect opportunity for gamers to expand their gaming library, with a wide selection of digital games available at a great price to purchase and download directly to their systems.”

The discounted games that are part of the Nintendo eShop Cyber Deals sale include the following:

All games included in the sale will be available for purchase in Nintendo eShop, as well as directly at https://happyholidays.nintendo.com/cyber-deals/. My Nintendo members will also earn Gold Points on all qualifying purchases.

If you’re heading to stores on Black Friday, you can also pick up some additional deals on physical products. Nintendo’s Black Friday deals include a Nintendo Switch system with the hit Mario Kart 8 Deluxe game as a full game download at a suggested price of only $379.99.

EB Games also has a huge selection of Nintendo Switch games on sale for $30 off including Pokkén Tournament, Mario Tennis Aces, Kirby Star Allies, Xenoblade Chronicles 2, and Skyrim. You can check out EB Games’ Black Friday deals, which start at midnight tonight, at EBGames.ca.