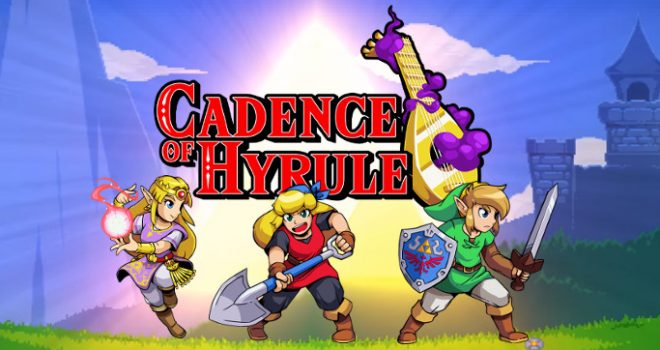 Nintendo showed off some upcoming independent games coming to Nintendo Switch this year today during a special showcase presentation. As more and more top indie developers bring their creations to Nintendo’s console, they continue to deliver high-quality experiences that can be played at home or taken on the go.

This included the surprise revelation of the rhythmic action-adventure game Cadence of Hyrule – Crypt of the NecroDancer Featuring the Legend of Zelda from Brace Yourself Games. There were also announcements from indie houses like Devolver Digital, bringing system-exclusive content like Katana ZERO and My Friend Pedro, and new game reveals like RAD from award-winning studio DOUBLE FINE PRODUCTIONS.

“Top indie developers look to Nintendo Switch to showcase their games to a broad audience,” said Steve Singer, Nintendo of America’s Vice President of Publisher and Developer Relations. “The diversity of indie content we discussed today demonstrates how Nintendo Switch players can find quality indie games of nearly any type.”

The games discussed during today’s video include:

Cuphead: Studio MDHR brings its run-and-gun action game to Nintendo Switch. Inspired by cartoons of the 1930s, the visuals and audio are painstakingly created with the same techniques of the era, such as traditional hand-drawn cel animation, watercolor backgrounds and original jazz recordings. The game launches on Nintendo Switch on April 18.

Stranger Things 3: The Game: Play through and delve deeper into the events of Stranger Things 3 in a retro-style adventure game from BonusXP. Explore Hawkins, solve puzzles and team up with a friend in local co-op to battle the emerging evils of The Upside Down as one of twelve playable characters from the hit original series. The game launches on Nintendo Switch on July 4, the same day the third season debuts on Netflix.

Red Lantern: Timberline Studios, Inc., challenges players to survive the Alaskan tundra with a team of five sled dogs. The Musher becomes lost while training for the grueling Iditarod race and must fend off bears, resist frostbite and take care of the dogs while navigating the wilderness and trying to return home. The game is coming to Nintendo Switch later this year.

RAD: DOUBLE FINE PRODUCTIONS and BANDAI NAMCO ENTERTAINMENT AMERICA INC. present a 3D action rogue-like set in a post-post-apocalyptic world. As a teenage protagonist, players must journey into the Fallow, an ever-changing, procedurally generated wasteland that holds the secrets of the past and answers for the future. Here, radioactive toxins will randomly mutate your character, giving you powerful new abilities that challenge you to constantly adapt your play style. Using these abilities and your trusty bat, you have been tasked with saving humanity’s future by healing the world. The game launches on Nintendo Switch this summer.

Katana ZERO: Devolver Digital and askiisoft have created a stylish neo-noir action-platformer featuring breakneck action and instant-death combat. Players take on the role of an assassin, the Dragon, to slash, dash and manipulate time to unravel their past in a beautifully brutal acrobatic display. Players can overcome the opposition however the situation requires, as each level is uniquely designed for countless methods of completion. Deflect gunfire back at foes, dodge oncoming attacks and manipulate enemies and environments with traps and explosives. Leave no survivors. The game launches on Nintendo Switch on April 18, and is available for pre-purchase starting today.

Super Crate Box: Vlambeer’s Super Crate Box is coming to bring back the glory of the golden arcade age, when all that really mattered was getting on that high score list. The Nintendo Switch version will include exclusive two-player co-operative and competitive multiplayer for even more arcade mayhem. Prepare for an arcade delight with tight controls, refreshing game mechanics, cracking retro art and a terribly hip chiptune soundtrack when Super Crate Box launches in April.

My Friend Pedro: Devolver Digital and Deadtoast deliver what is undoubtedly the first game about friendship, imagination and one man’s struggle to obliterate anyone in his path at the behest of a sentient banana. Players unleash a torrent of destruction with an incredible level of control over both their weapons and body. They can twist and turn through the air while aiming both hands at priority threats or lining up a perfect ricochet to drop an unsuspecting gangster from behind. The game launches as a system-exclusive on Nintendo Switch in June.

Creature in the Well: Flight School Studio challenges players to this top-down, pinball-inspired hack-and-slash dungeon crawler. Players venture deep into a desert mountain haunted by a desperate Creature to restore power to an ancient facility by charging energy orbs and having them bounce around and ricochet to reactivate dormant machinery. They will uncover and upgrade powerful gear to help them save the city of Mirage from a deadly sandstorm. The game launches on Nintendo Switch this summer.

Pine: Kongregate and Twirlbound offer a stirring open-world adventure with beautiful biomes to explore, puzzles to solve and secrets to discover. Players take on the role of Hue, a brave young adult who belongs to the last remaining tribe of humans on the island of Albamare. The island’s factions trade and fight with each other over food and territory, while Hue learns about ways to influence the ecology in search for a new home for the humans. The game launches on Nintendo Switch in August.

Bloodroots: Paper Cult delivers ultraviolence in a twisted Western revenge tale with a deranged cast of characters. Betrayed and left for dead, Mr. Wolf is hell-bent on finding his attacker and exacting revenge. Players can choreograph spectacular, bloody combos by making use of everything around them, from hatchets and ladders to … carrots? The game launches on Nintendo Switch this summer.

Overland: Finji delivers a new game from Adam Saltsman, the creator of Canabalt. In this turn-based survival game, players take care of a group of travelers on a post-apocalyptic road trip across the United States. Fight off scary creatures, rescue stranded survivors and scavenge for supplies like fuel, first aid kits and weapons. There are consequences for every action. The game launches on Nintendo Switch this fall.

Darkwood: Acid Wizard Studio and Crunching Koalas set their survivor horror game in East-Central Europe, in a forest possessed by unknown evil forces that corrupt all the inhabitants of the woods: people, animals and even the plants. Players can get new powers by extracting a strange essence from mutated fauna and flora and injecting it into their bloodstream. The game builds an atmospheric, psychological feeling of tension without the usual horror tricks of jump scares and creaking doors. The game launches on Nintendo Switch in May.

Neo Cab: Fellow Traveller and Chance Agency offer an emotional survival game about staying human in a world disrupted by automation. Lina, the last human driver on the neon-drenched streets of Los Ojos, California, interacts with a diverse cast of characters with individual story arcs. Players must balance their income, sustain a positive rating and manage their emotions, as fulfilling Lina’s job as a rideshare driver is the only way they might reunite with her best friend Savy, who’s mysteriously gone missing. The game launches on Nintendo Switch this summer.

Swimsanity!: Decoy Games takes a deep dive with this multiplayer underwater shooter with action-packed co-op and versus game modes, all supported by online and local play. The game comes with an ocean of content, with more than 150 challenges across eight game modes. Players can toggle between classic dual-stick controls and motion aiming, whether they’re playing locally or online*. The game launches on Nintendo Switch this summer.

To celebrate indie games (and their creators!), Nintendo is offering discounts of up to 30 percent on select indie games currently available in Nintendo eShop for Nintendo Switch. The sale runs from 1pm ET on March 20th until 11:59am ET on March 27th, and includes standout games like Firewatch from Campo Santo Productions and Yoku’s Island Express from Villa Gorilla and Team 17.