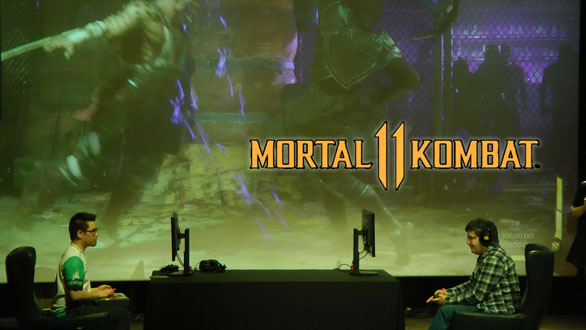 This past Monday we got to enjoy a special treat from our friends at Warner Bros. Interactive Entertainment. They hosted an event in Toronto which gave us an early look at Mortal Kombat 11. What a treat! We expected the game to be good but wow!

Seriously. MK11 defines the fighting that NetherRealm Studios has developed. Injustice and other Mortal Kombat titles leading up to this one have been impressive, but this one has something more. Oh so much polish. From the character models, to the menu and health bar graphics, to the animations themselves. Everything is just crisp. After returning home we popped on MKX and wow, what a difference. They had several TV’s set up that we were able to dive into some gameplay on, but there was also a setup where guests could test their might against two pro gamers. Those two were brothers HoneyBee and Biohazard. I had the pleasure of going up against Biohazard and while it was a good match, I have to admit he did obviously come out on top. It was different though than playing a game on hard mode. There is a strategic element to it and many of their matches looked more like professional wrestling. They checked out their opponents, got a grasp of what style they had, and took them down. We have some video footage that I’ll be sharing soon on our YouTube channel of the event as well.

The event itself was at the scenic Rec Room right in the core of downtown Toronto itself below the CN Tower. So it was quite the time. Honestly though, if you’ve only looked at MK11 casually as “another Mortal Kombat game” you’ll want to take another look. Reviews have been pouring out with many people praising the story. It really is a top notch presentation of that NetherRealm gameplay you’ve come to know and love. I’ve played both Injustice games and MKX. It’s clear this release has a lot more put into it than another story. This is a shining jewel that represents the next generation of Mortal Kombat.

We hope to have more game coverage for you soon as well as live streaming so stay tuned!

Till then please enjoy the launch trailer below! The game is available for Xbox One, PS4, PC and Nintendo Switch!