Jump Into The Void At 40% Off On Steam 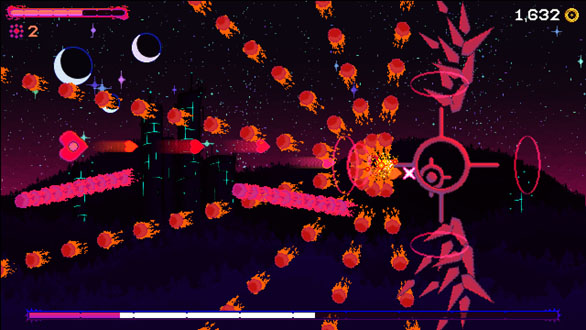 Somehow this game got lost in the shuffle, and I deeply regret that. The Void Rains Upon Her Heart is basically a side scrolling, boss rush mode game. You play as the heart of an alien girl who strives to make monsters love her. That’s all fine and dandy, but the gameplay itself is so much fun! It’s a bullet hell style shooter where your heart character just auto-blasts the daylights out of a large variety of monster bosses. There’s no levels to scroll through first, you just jump right in and zap away at the big bad in each round. The storyline is fun, and I do recommend it, but the main thing that has me hooked is just enjoying the shooter aspect. Dipping between tons of bullets flying off these alien creatures as they prepare a hyper beam to blow you out of the sky is thrilling! Let alone, I found myself cranking up the difficulty just to get even more bullets flowing across the screen at once. The display of these enemy shots is quite elegant too as they weave toward you. Some track you, others are just huge patterns to dodge your way through.

Sure, there are games like this, but it’s the speed in which Void keeps throwing more bosses at you that makes it fun. The action keeps coming and I love the game for that. It’s style is fun, some of the sample images don’t do it justice, and I’ve even taken to streaming some of it as well!

Give it a go today on steam for 40%! The Void Rains Upon Her Heart is still in early access but SO worth it already.