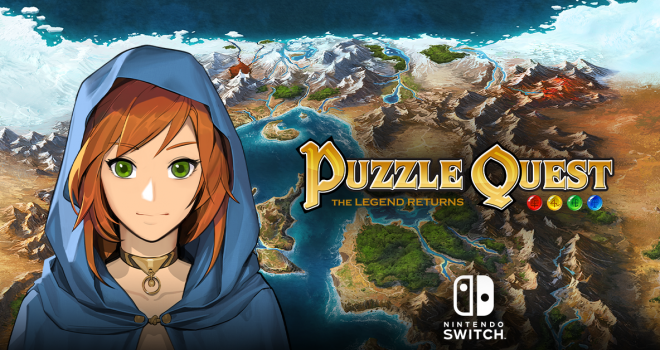 Puzzle Quest: The Legend Returns is now available to purchase on the Nintendo eShop for Nintendo Switch. A trial demo with access to three classes and a level cap of seven is also available to download today.

“It’s humbling that after over a decade, players are still talking about Puzzle Quest,” says Puzzle Quest series creator and developer Steve Fawkner. “This re-mastered release of the original Challenge of the Warlords was a true labor of love, created for both longtime fans and new players alike.”

Puzzle Quest: The Legend Returns contains more quests. There are over 240 quests and 100 brand-new quests, including branching quests involving meaningful player choices — and expanded story and lore for returning players. There will also be more classes. In addition to eight returning classes from previous titles, Puzzle Quest: The Legend Returns features five brand-new classes to level-up and master, including the Blood Mage, Priest, Monk, Paladin, and Elementalist.

The original “Match-3 RPG” release of Puzzle Quest: Challenge of the Warlords took place on the Nintendo DS in 2007. Since then it has spawned a sequel as well as spin-off licenced titles such as Magic: The Gathering – Puzzle Quest.

Puzzle Quest: The Legend Returns is now available for the Nintendo Switch for $14.99 CAD.