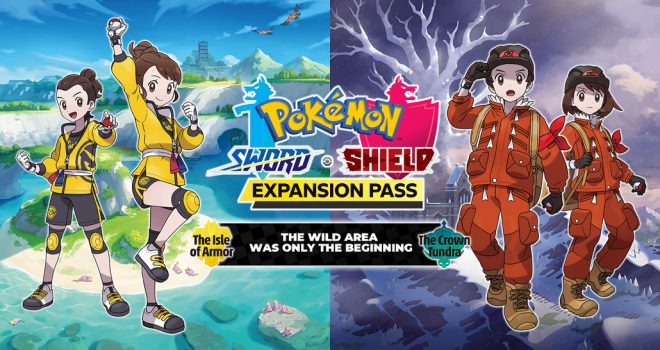 Nintendo held a Pokémon Direct on Thursday and surprised everyone with news of DLC for Pokémon Sword and Pokémon Shield.

You’ll be able to jump right into your new adventures with the same save data you’ve been using to play Pokémon Sword or Pokémon Shield. You’ll also be able to begin exploring The Isle of Armor and The Crown Tundra at almost any point in the main game. Whether you’ve just started your adventure in the Galar region or you’re well along the path to becoming Champion, you’ll be able to enjoy the new content as soon as it’s released, however you’ll need to have reached the Wild Area in Pokémon Sword or Pokémon Shield first.

The Isle of Armor is scheduled to be released by the end of June 2020, and The Crown Tundra is scheduled for the fall of 2020. However, the Expansion Pass including both these areas will be available for prepurchase starting January 9th. A new Galarian variant is also being added in Galarian Slowpoke. A free update to Pokémon Sword and Pokémon Shield was released today which will let you catch your own Galarian Slowpoke today. Once you’ve received the update, head to Wedgehurst Station. There, you’ll meet a Trainer who will appear in the Expansion Pass content. In Pokémon Sword, you’ll encounter Klara, while in Pokémon Shield, you’ll run into Avery.

In addition to this new Galarian variant, many Pokémon that didn’t appear in Pokémon Sword and Pokémon Shield make their homes on the Isle of Armor and the Crown Tundra. A lively array of diverse Pokémon, from newly discovered Legendary Pokémon and new regional forms to familiar Pokémon that have been seen living in other regions.

In The Isle of Armor expansion, you’ll head to The Isle of Armor, the stage of your new adventure in the Galar region. The Isle of Armor is a giant island full of environments not seen in Galar before—you’ll find wave-swept beaches, forests, bogs, caves, and sand dunes!,There are also plenty of Pokémon that make this island their home, living freely amid the lush natural surroundings.,There’s even a dojo here that specializes in some very particular training styles! You and your Pokémon will take up an apprenticeship under the master of this dojo and train hard to become even stronger.

The Crown Tundra expansion is set in the snow-swept realm of The Crown Tundra. See for yourself the beautiful scenery of this shining, silvery landscape! In this frigid area, with its jagged winter mountains, people live in small communities where they support and rely on one another.,A certain person will appoint you as the leader of their exploration team in The Crown Tundra. You’ll then be tasked with investigating the reaches of this frozen land. And remember the Pokémon Dens that you’ve only been able to glimpse during Max Raid Battles? Well, now you’ll be able to explore their full depths! There are tons or more new details from the expansion pass, including new clothing items and features. Check out Pokémon.com for more!