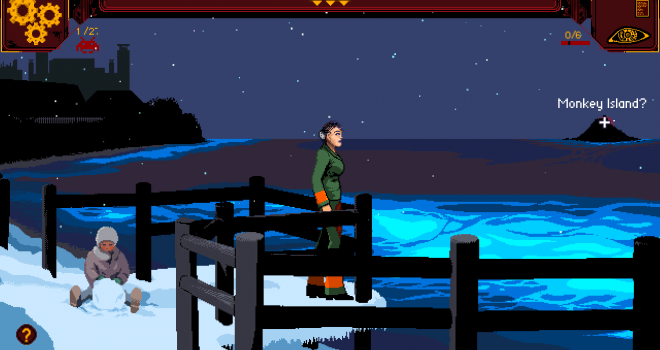 This summer, the one-woman studio 2054 will launch The Sundew, a dark cyberpunk, retro-styled adventure game, on PC and Nintendo Switch. Set in the aftermath of a devastating future war, where the world as we know it was twisted by flames into a terrifying new dystopia, The Sundew follows a lonely beat cop who soon holds the fate of the world in her hands.

Inspired by classic point-and-click adventure games from LucasArts and Wadjet Eye Games, The Sundew pays homage to those with its gameplay mechanics, style, and storytelling. Beautifully drawn pixel-art, stunning minimalistic sound design, environments brimming with atmosphere and interactivity, and a compact, thrilling tale brings this dark future to life and grounds you in a vision of humanity’s progress that is both alien and strangely familiar.

In The Sundew you play as Anna Isobe, a cybernetically enhanced cop in a world that’s left you behind. Once a shining hope for the future, cyborgs have become taboo, replaced by drones and automata that make even your heightened abilities obsolete. Stuck in a thankless job surrounded by indifferent eyes you still have a duty to protect and serve, and that’s just what you’re going to do.

“After several years of work and many adventures, The Sundew is finally about to see the light of day, said Agnès Vuillaume, solo developer of The Sundew. “I see this game as a world that players will be able to enter, followed by other games in the same universe. My greatest joy will be to see the players take over this world and make it their own!”

In The Sundew you’ll guide Anna Isobe, a cyborg cop with a dark past, through the unravelling of a global conspiracy. Experience a diverse cast of characters, each with their own secrets and history. You will make decisions that will change the fate of humanity, for better or worse.

There is no firm release date for The Sundew yet but it can be added to your Steam wishlist. The tentative release is set for Summer 2021.