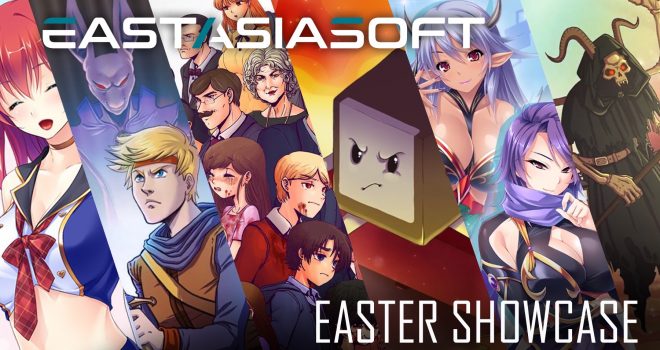 eastasiasoft has unveiled a new video showcasing a wide variety of titles scheduled for release in April and May 2021 across Nintendo Switch, PS4, PS5, Xbox One and Xbox Series X|S. This “EASter Showcase” continues the format used in December 2020 and February 2021 to provide a quick and informative reference for our rapidly expanding lineup in worldwide publishing.

I’m personally looking forward to the lewd third-person shooter, which has been pushed back until May.

What could be more rewarding in a game of solitaire than having cute girls dress up for you with each victory? In this updated and slightly naughty version of the tile-matching classic, clearing the board will unlock new outfits for your female companions, all of which can be viewed in the alluring Dressing Room mode. Meet 7 Pretty Girl characters and 2 hidden guests as you progress!

Delicious! Pretty Girls Mahjong Solitaire is simple yet challenging. Match pairs of tiles to make them disappear, but be careful and plan strategically so you don’t hit a dead end! Tiles are shuffled each time you play to keep each session fun and unpredictable. With over 100 layouts and randomized patterns, there’s always a reason to come back for more tile-matching and fan service!

Following the sudden death of a mafia family’s matriarch, her sons Gerald and Xander are put on the defensive as former partners threaten to take over their collective business ventures for themselves. See through the eyes of the Gallo children as they witness murders, kidnappings and other crimes wrought upon their households by their own fathers.

Crime Opera explores both the strength and frailty of familial bonds, presenting its narrative in beautifully illustrated style. Customize your experience by deciding to read straight through it like a kinetic novel or make choices that impact the story like a visual novel. Either way, this complex and effectual tale is bound to grip you from beginning to end as a life of crime spirals out of control.

Classic Texas Hold’em gets a magical twist at the Fantasy World casino, where you’re invited to play at tables against 16 Pretty Girls, from elves and demons to sorceresses and more! Each female opponent has her own look and unique style of play, along with Japanese voiceovers to let you feel their excitement in the intense poker battles. Start out against 4 of these gorgeous players and unlock more as you prove your skills worthy of new challengers.

There are 2 game modes to choose from – In Pretty Mode, you’ll collect rewards as you defeat random opponents, while in Free Play Mode, you can customize the experience by choosing which of the unlocked girls will join your table. With so many characters to meet, plus traditional mechanics that are fun and familiar, this is a fantasy experience that you can revisit time and time again!

This game reminds me a lot of Fortnite (Save the World, not battle royale). It looks like a lot of zombie shooting with a sultry waifu aesthetic.