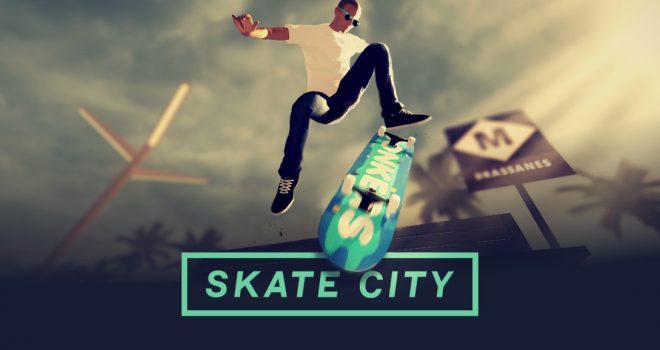 Skate City – Coast through three iconic locations inspired by real-world skate spots in Los Angeles, Oslo and Barcelona. Pull off realistic tricks with ease and skate just like the pros. There are hundreds of combinations available, including flip tricks, grabs, grinds, spins and manuals. Complete over 100 challenges or chill out and ride at your own pace with Endless Skate. Customize your skater by picking up new deck, trucks, wheels, shoes, hats, glasses, and clothes in the skate shop, then skateboard to an original soundtrack of atmospheric lo-fi beats.

Beach Bounce Remastered – Tomoyo finds himself at his grandmother Umi’s beach resort, looking forward to a great summer where he can finally put the past to rest and possibly take his life forward in a better way than the coasting he was doing up until now.

Save me Mr Tako: Definitive Edition – Dive into a great adventure in the classic handheld era! In a world where humans and octopuses are at war, Tako is a pacifist little octopus who rescues a woman from drowning one stormy night. A fairy sees this act of bravery and grants him the ability to survive on land. As he travels across the world, Tako defies his family and his people to try to resolve conflicts between humans and octopuses, plunging him into the very roots of this dysfunctional world.

Poker Pretty Girls Battle: Fantasy World Edition –Classic Texas Hold’em gets a magical twist at the Fantasy World casino, where you’re invited to play at tables against 16 Pretty Girls, from elves and demons to sorceresses and more! Each female opponent has her own look and unique style of play, along with Japanese voiceovers to let you feel their excitement in the intense poker battles. Start out against 4 of these gorgeous players and unlock more as you prove your skills worthy of new challengers.

You can now download a demo for the Miitopia game in Nintendo eShop on the Nintendo Switch system to get a taste of the humorous adventure that awaits. Miitopia lets you cast your friends, family or anyone you choose to star in your journey to conquer the face-stealing Dark Lord. In this demo of the game’s first area, you’ll be able to create and customize your Mii characters with wigs and makeup. Your save data from the demo can carry over to the full game when purchased, so if you enjoy your first bite, head over to Nintendo eShop to pre-purchase the full smorgasbord of swashbuckling silliness!