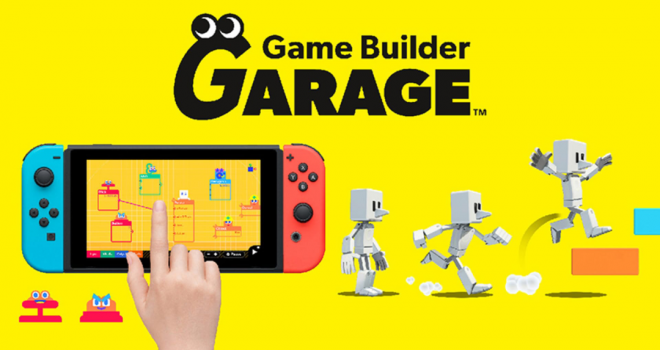 Game Builder Garage – Have you ever dreamed of building your own video games? Game Builder Garage is a great place to start! Learn game design and programming step-by-step from lessons developed by the minds at Nintendo. You’ll get help from a cast of Nodon – creatures that live inside your Nintendo Switch system! They’re in charge of programming tasks like moving your character, pressing buttons and adding sound effects. With the helpful Nodon at hand, you’ll learn how to create a tag game, kart racer and alien blaster … and that’s just the beginning of your game-design journey! Exchange codes with friends who also have Game Builder Garage to share your games, or download their games, too, and study how they built their creations for more inspiration. Game Builder Garage will be available June 11.

NINJA GAIDEN: Master Collection – Enjoy heated battles with fearsome opponents in NINJA GAIDEN Sigma, NINJA GAIDEN Sigma 2 and NINJA GAIDEN 3: Razor’s Edge – available together in one thrilling collection. In addition to Ryu Hayabusa, four other characters – Ayane, Rachel, Momiji and Kasumi – are also playable and appear as they did in the original versions of the games. You can create a tag team with your favorite characters and freely swap them out during battles. Most of the previously released game modes and DLC costumes for each title are included. Playable characters and scenes (modes) vary for each title. Look forward to intense combat with formidable foes!

Alba: A Wildlife Adventure – Join Alba as she visits her grandparents on a Mediterranean island. From idyllic beaches to the ancient castle overlooking the town, a whole island is ready to be explored. Alba is ready for a peaceful summer of wildlife exploration with her friend Ines, but when she sees an animal in danger, she realizes she needs to do something about it. With Ines and your grandfather by your side, you can start a movement to save the island. Maybe even the world after that.

Celebrate the Launch of DC Super Hero Girls: Teen Power – Unleash your inner crime-fighter with a DC Super Hero Girls drawstring bag featuring Supergirl, Wonder Woman and Batgirl. The bag displays a “Fighting for Justice” graphic that shows the world you’re ready for battle! You can receive this reward by redeeming 500 My Nintendo Platinum Points (while supplies last). Visit https://my.nintendo.com/news/bfccdd54e4d356ce to learn more about this new offer.