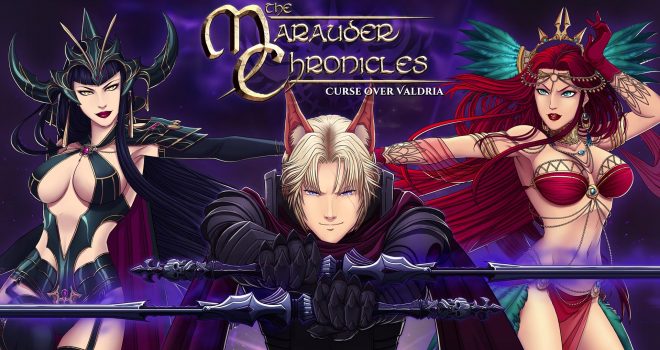 Gamuzumi has announced a brand new visual novel project from developer Mambo Dancing Shrimp. The visual novel, called The Marauder Chronicles – Curse over Valdria,  will follow the same model as Sakura Succubus in being an episodic visual novel series.

When Dayren Vel’sharek, the charming male protagonist of cursed Valdria is sent by his master to assassinate a sworn enemy, he is thrown into an epic journey that will test both his allegiances and his skills and allegiances.

Explore a vast kingdom filled with beautiful and powerful women to engage, while making impactful choices that may later affect the outcome of the larger story. But be aware, lurking within this cornucopia of conquests is the ominous Marauder, creator of dark, monstrous beings ready to bring uncertainty and unexpected events…

Curse Of Valdria is just the beginning of The Marauder Chronicles upcoming saga.

The visual novel will be released on Steam and on consoles (no confirmation on which consoles) and Gamuzumi notes the mature content description as “Suggestive nudity and such” which is always a promising description.

There’s no firm release date set yet but it’s pegged for Summer 2021.