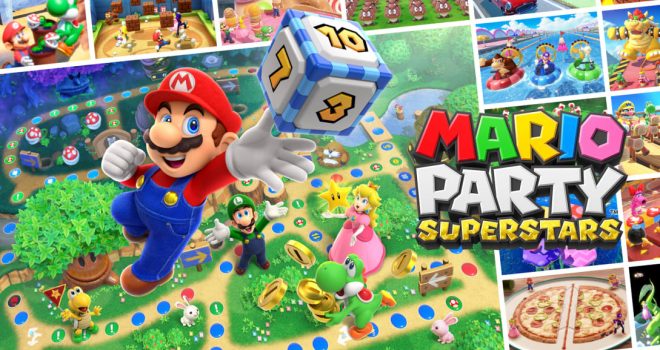 Mario Party Superstars – Get ready for an all-star blast of minigame mayhem! The Mario Party series is back with classic gameboards and minigames, including five boards from the Nintendo 64 Mario Party games. Race to get the most stars (and sabotage your opponents) on boards like the stellar Space Land or the spooky Horror Land … just in time for Halloween! The tides can turn quickly in Mario Party, so stay vigilant, partygoers. All modes can be played online, too. Connect with friends and get ready to make some instant memories. Mario Party Superstars will be available on Oct. 29.

Pokémon Café ReMix – Link together Pokémon icons to clear puzzles as you work to build up your very own café in Pokémon Café ReMix, a free-to-start game for the Nintendo Switch family of systems! Recruit Pokémon to help out at the café (in their stylish uniforms) by building friendships while expanding your café and menu offerings by completing puzzles. Each Pokémon staff member has a Café Skill that will come in handy solving puzzles! Pokémon Café ReMix is a revamped version of the original Pokémon Café Mix game. Puzzles have been refreshed and there are even more Pokémon to discover and recruit.

Voice of Cards: The Isle Dragon Roars – Experience an RPG set in a world of swords and sorcery, told entirely through the medium of cards. The story follows a self-proclaimed hero as they set off to slay a recently awakened dragon, presented in the manner of a tabletop RPG that plays out through narration from the gamesmaster. Enjoy a new, yet appealingly nostalgic, gaming experience from YOKO TARO, Keiichi Okabe and Kimihiko Fujisaka. Be sure to try out the free demo in Nintendo eShop today.

Tunche – In this charming, hand-drawn beat’em-up with roguelike elements, co-op and a pinch of shaman witchcraft, you’ll choose one of the five characters, master their skill sets, defeat epic bosses and unravel the secrets of the mysterious Amazonian jungle! Tunche will be available on Nov. 2.

World War Z – The heart-pounding zombie shooter that captivated over 15 million players arrives on Nintendo Switch. Inspired by the Paramount Pictures film, World War Z focuses on fast-paced, third-person shooter gameplay featuring swarms of zombies. Humanity is on the brink of extinction. From New York to Moscow to Jerusalem, the undead apocalypse continues to spread. As the end looms, a hardened few band together to defeat the horde and outlive the dead. World War Z will be available on Nov. 2.