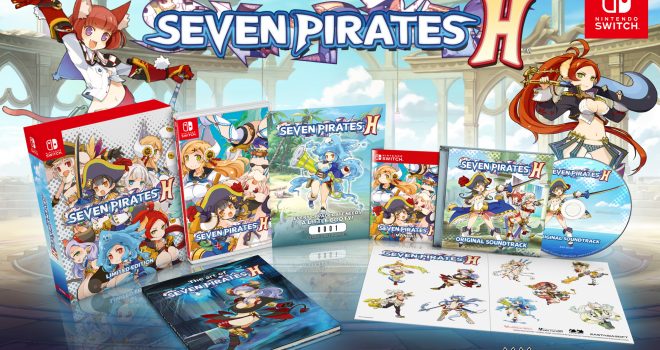 Eastasiasoft is bringing a sexy anime styled hack and slash title Seven Pirates H to the Nintendo Switch and this Spring. The game is getting a physical special edition release.

“In a joint collaboration, eastasiasoft and online retailer Playasia, today announced that Seven Pirates H will make its western debut on Nintendo Switch in Spring 2022, with physical standard and Limited Editions opening for preorders this week. This is a brand new port of the next stand-alone entry in the Genkai Tokki RPG series from Idea Factory, complete with all prior DLC from the original Japan-only PS Vita release and enhanced HD presentation.

Following the western release of Moero Crystal H for Nintendo Switch, eastasiasoft has once again partnered with Idea Factory to bring this special project to territories outside of Japan, adding English and Traditional Chinese localization for new players to experience for the first time. Seven Pirates H follows the story of young pirate Parute as she recruits monster girls on her quest to locate legendary treasures and increase their bustline along the way!

Seven Pirates H is developed by Compile Heart and Felistella, published in its original release and ported for Nintendo Switch by Idea Factory in close cooperation with eastasiasoft. Digital pricing will be shared at a later time. Preorders for physical editions will open with Playasia at 11:00pm Hong Kong (10:00am ET / 3:00pm UK) this Thursday, January 13th. Only 4000 Limited Editions will be available at US$59.99. Standard copies will be open preorder at US$39.99.”

The physical edition can be preordered on PlayAsia as well as VideoGamesPlus in Canada. The standard edition goes for $69.99 CAD with the special edition with extras selling for $94.99 CAD.