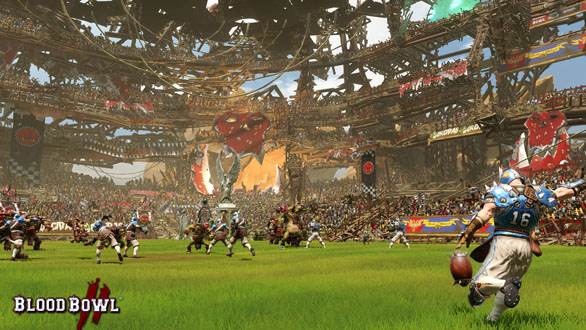 Blood Bowl 2 is a fantastic game for RPG combat fans who want something different to do in the battlefield. It feels like a tabletop battle, which makes sense since that’s what it’s based on. Things move at a faster pace since you’re not focused on killing each opponent. More so you’re trying to block them and get the ball of your own team.

It’s only a little more complex than that. I was able to get the full grasp of the game in one sitting, so there isn’t a huge learning curve here. It looks like football but plays differently. The game is split into two halves that consist of eight turns each. These turns shouldn’t really be looked at as who has possession of the ball. Since it’s a turn based game your focus is on the whole field. Considering a fumble is basically running a “blitz” to roll the dice and knock the ball carrier down, it doesn’t make you think of traditional possession from football. 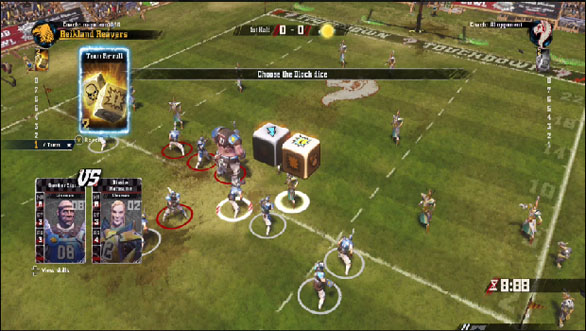 Think of the game as a football version of Disgaea. You select your characters and use your movement points to travel across a grid on the field. Each turn you are free to have one pass, one hand off, and one blitz. A blitz is a long play which focuses on a player traveling to take on an opponent. When they meet you roll the dice to see if you either knock them back, knock them out, get knocked down yourself, or both players get knocked out.

Teams consist of a mix of player types. In the campaign you’re recommended to have two catchers, a thrower, linemen, an ogre, and one other type that escapes me. Different races have a different variety of these units however. In total your team equals out to eleven players. These various units have different ability scores and skills to help them in games. The mix of this makes it fun to create the team you want.

It’s not just as easy as running the ball into the end zone however. Opposing players have an area of influence around them in which they can knock down a player who is trying to run by. You’re given a percentage that shows your chance of success to get by them. You also have two additional tiles each player can move per turn that also have a chance of straining the player and making them trip. So you could go all out and try to run those last two tiles into the end zone, but you may trip and lose possession of the ball.

The campaign itself has a decent amount of animation between Jim and Bob, two commentators who tell the story of how you came to lead your team of newly hired players. They also do add quite a lot of life to each game. Occasional lines are nice nods for Warhammer fans as well. While fun, I didn’t find the campaign to be very challenging. Either that or I’m actually decent at the game. That however seems to be where the real draw of this release comes in. I haven’t played any online matches yet but my comments on Steam point toward that being the main focus of this game. Like some others, I’d rather play offline and it’s recommended by them to just pick up the original Blood Bowl instead. 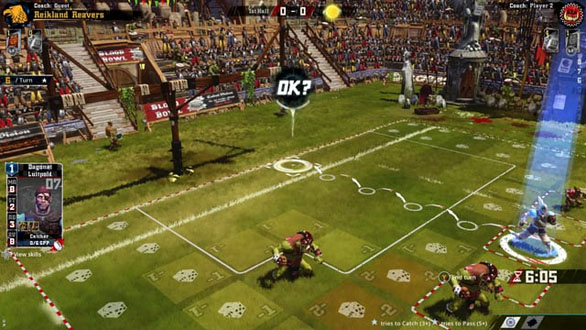 There are friendly pick-up games you can play as well against the AI. So it isn’t all about multi-player but it does seem like that is the intention of Blood Bowl 2. For what it is though I do enjoy the game and I see how playing against live players would certainly make it a better experience. There is something fun about the concept in general and the mechanics of the game work well. Unfortunately I’ve never played the original tabletop edition, but it’s great to see related content being released in a turn based format. Warhammer is a rich universe and turn based gameplay is what I look for in related video games. A friend of mine actually recommended Blood Bowl 1 to me long ago just because of the fact that I wanted a turn based Warhammer title. Sure it doesn’t have adventuring elements to it, but it is a fun take on RPG combat.

Blood Bowl 2 is a beautiful game which can be very deceiving if you’re tuning in to a live stream or looking at certain screen shots. Many times I thought that some preview content was just a flat view of a field and occasionally cut to action shots. This isn’t true, it was more so just camera positioning that confused me. The whole stadium is there as you play and it looks great as your players dodge around their enemies to get further up the field. There are combat animation as well that show many of the knock downs that occur during play. The game looks great! 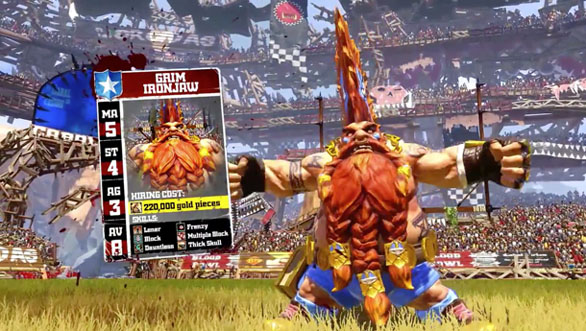 There are some icky bits I didn’t get into such as microtransactions and DLC. It’s these issues that seem to have the community most upset by this latest release. If nothing else, I’d recommend looking into the original release. It seems to have more content for single player gamers like myself. Regardless if you want to get into PVP and play a strategic game with others online, or if you’d rather just beat some AI senseless offline, it’s a fun experience. Even when I was mopping the field with the other team, it still felt good. I still had to plan out my next move and send my players around theirs to go after the ball carrier. Sometimes it was easy. Others we were blocked and had to work harder.

The most important thing is to forget what you know about football and give the campaign a try to learn how to play Blood Bowl. Thankfully the tutorial is light enough that it assumes basics like you’d want to move your player to where the ball is to pick it up. It’s not a grueling affair of tons of details. If anything, it’s a quick experience that gets you into the game and feeling experienced. With it’s low learning curve and fun gameplay, it’s easy to recommend Blood Bowl for a mild sports fan who enjoys turn based, tabletop style combat. Whether the first or second game is right for you is another matter between your desire for single player or multiplayer experiences respectively it seems. I’m certainly going to give the original title a go. No matter which version is right for you, there is something really neat here that is worth looking into. It’s turn based combat with a twist that feels fun and engaging even when you’re winning by a decent margin.