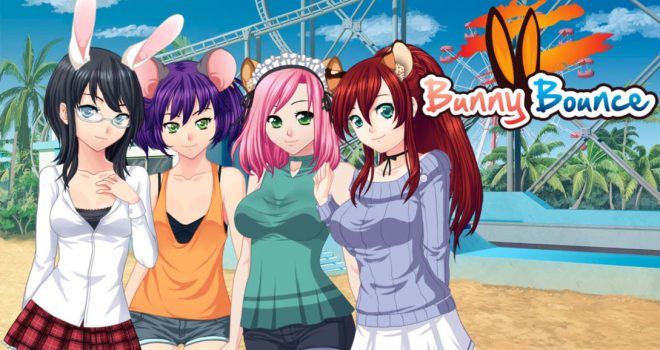 Gamuzumi’s latest sexy visual novel from Dharker Studio Bunny Bounce continues the story in this third part of the Beach Bounce series. The story takes a strange twist but is one that is both fun and a good way to amp up the sexy.

The titular Beach Bounce resort filled with beautiful girls is full of distractions. This however is made even worse when our protagonist Tomo has an accident which leads him to start hallucinating whilst on the job… Are those Bunny Ears? And what are the girls now wearing to work?

What’s the best way to get all of the girls in sexy outfits in the visual novel? We had a beauty pageant in the last entry but the writers took a different approach this time. After getting into an accident and getting a bump on the head, Tomo starts to hallucinate. All of the people around him look like they’re in their underwear and some of them are dressed up in kinky animal cosplay.

There are worse things to hallucinate about.

In a contrast to the previous game, Tomo’s focus this time around isn’t running the resort but instead taking it easy. With taking things more casually there is more one in one interaction with each of the girls.

The story has a branching ending with for possible endings depending on choices you make in the game. These choices are mostly in flirting with the girls, which result in you either sleeping with them or not. There is some deeper meaning behind the end result of the choices, which becomes clear when you get the bad ending.

My only real qualm with the last game is the same here. I wanted a little more meat in the story. The story lasts for a few in game days with a single girl becoming the main focus of each day. These interactions felt a little too shallow and not fleshed out enough. Some of the character traits, history, and motivations felt like they needed some more time to develop. I would have loved to have had more time with each girl and learn more about them.

The character gallery images also felt a bit hit or miss for me. I liked the way the characters looked in the dialogue part of the game. However the full screen CG images, which are usually the payoff images, often weren’t as good as the regular character drawings. Some were great but some others almost felt off, like they were different characters.

Despite its minor flaws I enjoyed Bunny Bounce. After the three games the characters are finally starting to get rounded out. Hopefully in the next game there is some more meat on the story bones.