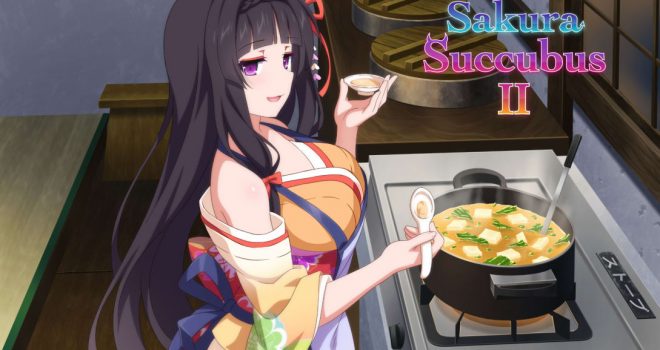 When I started the first Sakura Succubus visual novel in the Nintendo Switch I didn’t realize that it was a serialized story. I knew that there was a sequel with a third game in the way, but I didn’t know how necessary it was to start at the beginning. Sakura Succubus II continues the story of the first game right where it leaves off.

Ogasawara Hiroki is a thoroughly average man, until a photography job changes his life. Suddenly a gorgeous actress, athlete, idol, businesswoman and social media star, all the girls of his dreams are within his reach.

They’re all rich, famous, and extremely well-endowed, and they should be utterly unattainable…But, for some reason, they’re insatiably attracted to Hiroki!

Hiroki’s harem is set to gain even more members… But does he have enough time and energy to give these women what they want?

The game picks off right at the end of the first Sakura Succubus but the game gives you a brief recap to get you up to speed. So while you could in theory start the story here, it’s better to start with the original before jumping in here.

Sakura Succubus II adds a pair of new girls for the protagonist to woo. The original three girls are all in the game since it takes place as a narrative continuation of the first game. Marina, Cosmos, and Ayu are all here, but the focus of the wooing happens with the introduction of the new girls (ahem succubus) Hifumi and Hazel.

Both of the new girls are very different from each other and also different than the original trio. Hifumi is a soft-spoken waifu type while Hazel is an energetic, sporty, tennis athlete. The characters are like polar opposites and feel fresh.

Given the nature of the plot all of the girls are naturally all succubus. It feels a bit silly that each time the protagonist meets one of the girls that he is surprised that they are. As a reader it feels like an obvious fact. It world be interesting if the next volume or beyond introduced a girl that was not to liven things up.

The only thing that I don’t like so far in the game is that there appears to be cut content in the Switch version. The official account for the publisher hss been sharing what looks like original and/or cut artwork from the game. While I can understand that the clear NSFW art was likely not included in order to pass Nintendo’s quality approval, it feels like entire sections of dialogue and scenes have been nixed.

When in the game the protagonist has sex with the girls, the game text very subtly hints that the story is headed in that direction and then cuts to later on or afterwards. It was very unclear in game if anything actually happened until later dialogue references the encounter.

I don’t need to see the extremely lewd and nude images, but the fluidity of the story suffers in my opinion.

With that said, I think Sakura Succubus II is an enjoyable read and am already ready for the third story in the series. The story ends in somewhat of a cliffhanger and the story looks like it’s headed in a fun direction.