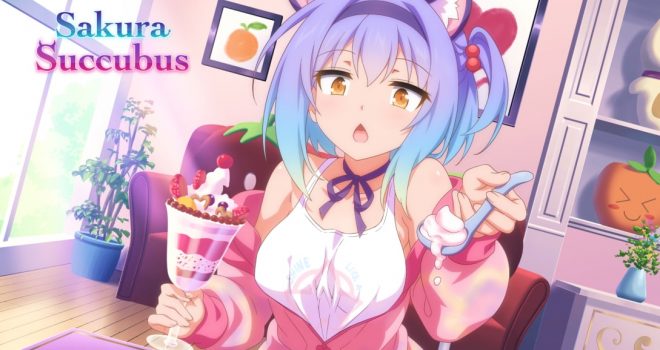 Anime inspired games and visual novels are definitely in my wheelhouse. One of the more recent releases to arrive on the Nintendo Switch is Sakura Succubus published by Gamuzumi. Originally released by Winged Cloud on Steam, the game is a bit on the short side but is still full of lewd goodness.

Ogasawara Hiroki is a thoroughly average man, until one day, that is, when he’s tasked with taking photos of Japan’s top idol, Ikue Ayu. Hiroki soon finds himself at the mercy of three beautiful women – there’s the cute idol Ayu, the sultry businesswoman Marina, and the airheaded social media star Cosmos.

They’re all rich, famous, and extremely well-endowed, and they should be utterly unattainable… But, for some reason, they’re insatiably attracted to Hiroki! They can’t get enough of him – and soon, Hiroki’s average life becomes anything but.

One of the first things that I noticed with Sakura Succubus is that it’s not fully voiced like most visual novels that I’ve played. While they are usually only voiced in Japanese and I need to actually read the text on the screen, it’s much more engrossing to hear the dialogue.

It can also help bring more personality to the character and let you connect to them better when you can associate a voice to their likeness.

That being said it’s not a deal breaker and the game is fine without it. It actually makes it feel more like a visual “novel” without the voice acting.

Sakura Succubus is actually rather short. The game is a pretty linear story and you can get to the end of the game within a few hours. Spoiler alert: The game is really like the first chapter of the story, which continues in the second game and beyond. As of this writing there are three in the series in the Nintendo Switch with a fourth just getting released on Steam.

The story is pretty straight forward. At several points in the game you are given choices of reactions to questions. I thought these choices would direct the game towards which of the girls would become your love interest, but the game ended so quickly I’m not sure if it made a actual impact.

The music in the game is pretty good and is fitting of the different scenes. But of course it’s the art that is the draw of these sorts of games. It’s the “visual” in visual novel after all. The backgrounds are all beautifully drawn. While there are times that this is the only thing in screen, it’s the girls that take centre stage. The three girls in the game are very cute and well drawn.

Despite the”M” rating of the game, it’s pretty tame. There is some very brief mildly suggestive dialogue, a mention of “boobs” a couple of times, and some suggestive angles in the the cg screens, but Sakura Succubus is a very light lewd game.

I’ve seen full topless content in another recent Switch release, so I wonder if future Sakura Succubus releases can do the same.

I’m interested to see where the story goes with the sequel (or really next chapter) in the series. I really hope that the story makes your choices matter and let you lean towards some of the girls. I’m totally #TeamCosmos here.