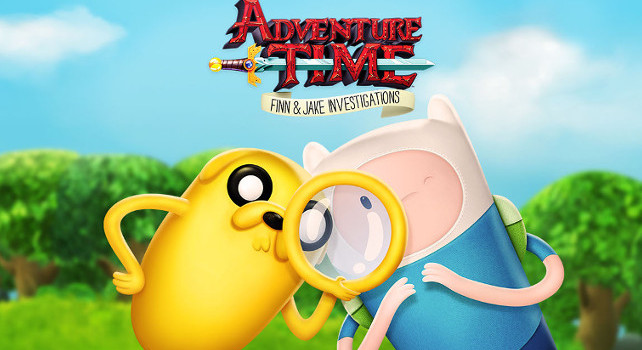 Adventure Time: Finn & Jake Investigations isn’t a hard game by any means. In fact it’s a little bit too easy. The battles aren’t necessarily tough and the structure of the game is very basic. But where the game does run into some trouble is partly inherent in the licence from which it was born.

If you’ve seen Adventure Time you know that the series is weird. Perhaps that’s putting it mildly but the show is somewhat odd. That’s all well and good in the world of passive entertainment, but when it comes to problem solving in that world you need to throw logic out the window and just try random stuff until you figure it out. But I’ll save that for later.

Adventure Time: Finn & Jake Investigations is at its core a point and click puzzle game that has been made with a controller in mind. If this were a flat browser based flash game being played on the computer screen you would be clicking on items and figuring out what you can pick up and put where. This is pretty much what the game entails, except it’s made in three dimensions and you move around Finn with the controller.

In the game strange stuff is happening in the Land of Ooo. But luckily, Finn and Jake are on the case. This mysterious adventure will put their detective skills to the test as they search for clues, interrogate witnesses and piece together the evidence to save the day. The game really boils down to finding items around the areas to pick up, combining some of those items and then using them to progress the story.

When you find something you can interact with one of three icons will pop up on the screen letting you know if you can look at it (B), interact with it (A) or use an item on it (Y). This makes it pretty easy to know what you can do and how. You can cycle through the items you have in your inventory to use them in various places. One thing that I didn’t notice for the longest time was that the inventory actually has a little “+” icon if it’s something that can be combined, which is very helpful if you get stuck. I wasted more than a few minutes blindly trying to combine items.

So I said that sometimes you get stuck in the game. There are moments when you seem to lose your momentum and aren’t sure what to do next. You have your goal in the game, like make Tree Trunks some tea, but can’t figure out where or how to find the ingredients. Using the handy [L] shoulder button can be a lifesaver. I was stuck in the second half of the first story mission for what seemed like forever. I even posted on Miiverse that I was lost. I had seemingly clicked everything, tried to combine everything, and yet still I was clueless. Stumbling on the [L] button was a pure coincidence that saved me.

One person in Miiverse gave me a lead in the right direction by telling me to combine two items, one of which I hadn’t even found. While some of the items stand our like a sore thumb and are quite apparent (underwear up on a spire for example) others aren’t so obvious. The rope that I needed to keep the game going looked like it was part of the background and I had blindly walked by it multiple times without the menu popping up to show me that it was clickable. This is where [L] comes in handy. If you hold that button then a little sparkle will appear over every touch point in the level. This definitely makes it easier if you’re getting a bit lost.

And you’ll be holding the [L] button a lot.

Adventure Time: Finn & Jake Investigations is a decent game. Sure there are moments where the dialogue is a bit clever and occasionally funny and I’m sure if you’re a fan of the show there is some payoff in seeing the characters fleshed out in 3D. But the game is also another thing: very repetitive.

The looking around, clicking, combining items, and solving the clues is pretty much the whole game. I get that games are repetitive by nature but it feels like there should be something more to the game. And the battles don’t really add that “more” to the game. Overall the battles themselves seem to be added as an afterthought to the game. They aren’t really that much of a challenge and thus far into the game don’t seem to have any real purpose. Battles are pretty much button mashing and then joining Finn and Jake together in a combined form to do some extra damage. For the most part the enemies you fight are pretty clueless and you can easily dispatch of them. It’s also odd that when you clear the field more pop up.

The battles themselves seem like nothing more than something that was added into the game to add a bit of variety to a very one dimensional game.

After the battles you’ll get some loot, which the characters seem very fond off. This loot also doesn’t seem to serve any purpose as you can’t buy anything and it just fills a room at their treehouse.

As much as I don’t like this game, I don’t hate this game either. There is something about the leisurely pace of the game that I kind of enjoy. It’s not hard and it’s not quickly paced. I’m not frantically trying to “not die” like happens in a lot of games. There is something oddly enjoyable about the game and I wonder if it’s part of the unusual world in which it’s based.

* NOTE: The Wii U version of the game was played for this review.