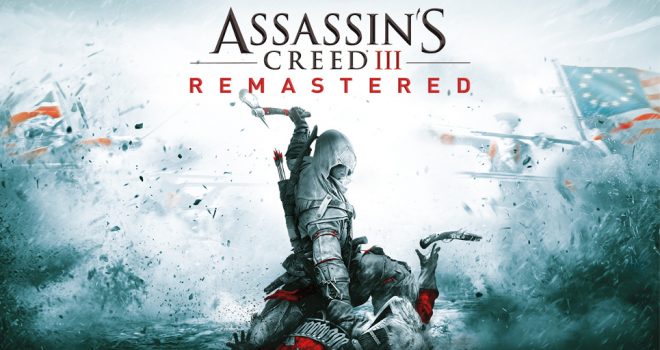 Assassin’s Creed III isn’t the game I was expecting, though I’m not sure what I was really expecting. Having never played an AC game before I was disappointed in the game and playing often felt more like a chore than anything else.

Assassin’s Creed III Remastered does have some charm. It’s neat exploring old Boston and the countryside surrounding the old city. The city is huge and there is a lot going on around you as you play, so much so that I often wanted to just stop and explore. Much the same way that in the Grand Theft Auto series you can just wander around for hours you can do similar in AC III. Unfortunately some of the chaos and randomness that is ever present since Grant Theft Auto III, there isn’t really much to do around you.

You can’t enter buildings and you can’t really interact with any of the people around you other than bumping into them and knocking them out of your way. You can’t even do the same with the red coats (British police) unless you actually get them after you. Like Grand Theft Auto once the police are on your trail you have to run away and hide to lower your “wanted level” and get into the clear. It’s not too difficult to do this, but the novelty wears off pretty quickly. Whereas in GTA you have a lot of weapons and vehicles at your disposal, here you have basically your fists, a sword, and can run away on foot.

While you can’t interact much with other characters and the environment, the game overall looks great. The environments are very detailed and beautiful. And when you climb to the top of a building or the steeple of a church, the views are breathtaking. They are also massive and you can spend a long time walking and trudging through them, especially when you’re out in the wilderness.

The game is fully voiced, which is nice. The character models however don’t look that great and the eyeballs in them was something out of a horror movie. The bright white eyes were a stark contrast to the mostly dark tones of the rest of the character models, which looked strange. Perhaps it’s because the game was made for a previous generation of console or that that style isn’t really “in” right now. Overall they felt dated, and that’s saying something who didn’t play games in this series or genre back then. I eluded previously that the game was often a chore to play. This boils down to some of the mechanics of the game. For example there are times where you have to eavesdrop on red coats to gather intel. Sounds reasonable. To do so you need to step within a circle radius to “hear” the conversation. If you are noticed by the targets or other red coats then you fail this task, the mission, and it resets. The problem with these is that you end up trying over and over and over and over to find the exact right spot to stand to complete the task. If the targets start to walk around you then have to navigate to keep within the bubble and, if you don’t, you fail the mission as well.

This same trial and error happens many times, notably with the “don’t be seen or else” guidelines. Most of the time there isn’t a chance to recoil, knock out a guard, and continue the mission. It’s one and done. Many times I was ready to put down the controller and walk away in annoyed frustration.

Another time in a story mission I had to take a key from a guard to unlock a door. When trying to find the right guard on the map, without being seen by another guard, I was spotted. So I started fighting and beating up what turned out to be an unlimited number of red coats. They just kept coming. After that proved fruitless I decided to run away and lose the heat on me. But no matter how far I ran or high I climbed they kept coming. I had to eventually swim out to sea for them to lose me and continue the mission. This also proved useless however as the guard that I was supposed to “pickpocket” was no longer on the map in the designated spot, even though the marker was still there. After another fifteen minutes of trying to figure out where the guard was, or how to get inside the building I thought he must have been, I resorted to reloading the game. I then found said target guard standing outside. Exactly where he had not been the last time. I presumably killed him in the dozen minute melee previously.

I pick-pocketed him, got spotted by guards, ran around trying to lose them, and then when I got to the story point where I was supposed to pick the lock the game jumped into story mode and mysteriously all the red coats bearing down on me were … poof … gone.

This jarring cut out of action into story happened a few times. There were a few other instances of this as well where I ended up staring at the screen confused as to what to do.

One other such instance I roamed around a circle on the map in a snowy wooded area for more than ten minutes as I tried to figure out where the target which I was supposed to be following had gone. I spent the bulk of that time fighting off and killing another seemingly infinite number of wolves as I wandered in circles. It wasn’t until I had nearly given up that I spotted the person sitting in a tree and the story continued. I finished the story element and switched off the game.

I wanted to like Assassin’s Creed III more and I will likely go back to it at some point in the future. It deserves another shot.