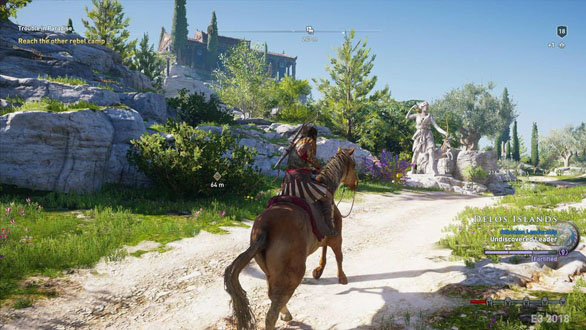 Origins took the Assassins Creed series in quite a new direction. That familiar stealth gameplay was still there, but there was a new feeling as well. Instead of traditional upgrades that had evolved in the series, there was a leveling up system now. That and gear to find for your Bayek, the games main star. Odyssey takes that refreshed look at Assassins Creed and builds upon it further.

First off, Odyssey is massive. Ridiculously so but in a good way. Literally you’re not getting a standard video game here, you’re getting a hobby. Taking place in ancient Greece you’ll pick between a brother or sister to go out adventuring as. Separated from their family you’ll spend the early hours on the island of Kefalonia. If you’re anything like me however, this early tutorial area of sorts will stretch out into the first region you’ll do everything in. Really the story sets you up for this anyway, but I took my time turning over every quest along the way.

The leveling system paces you along at a similar route anyway. So far I’ve only been slowed down on the main plot once and I almost feel that was my own doing. After you get into the main world you’ll quickly get to larger and larger areas until you’re bound to miss something. That’s what happened to me. After returning to a previous zone I found a ton of things to do and those missing levels were rewarded in good time. Quite honestly, I’ve done so much since I question if I’m not over leveled at the moment. Zones are marked off to show the minimum level you’ll need like in Origins however. So you do have a choice to press forward or just flitter around the Greek world doing side quests. One of the new features to Odyssey is conquest. Egypt featured you playing as law enforcement of sorts. Though really, you had a similar role to Odyssey as a mercenary. However, you can take a side in these new conquest battles and win fights for either the Spartans or the Athenians. These battles are decent sized and in terms of enemies and do feel tactical in a sort. Your main objective is to defeat opponents and lower their meter to zero first. When you first get into these fights it really encourages you to learn the game mechanics to heal yourself with abilities however. After all, you’ll pretty much be facing wave after wave of two or more foes at once during these fights.

How conquest battles begin is also interesting. Each zone has a faction that controls it. As you play there are ways to destabilize that faction. From slaying their ranks and leaders, to burning their supplies. These all bring down the nations rating until a conquest battle can be triggered through a visiting a marker on the map. Between all of that, there are ample ways to level up. Let alone you’ll eventually receive targets like Origins system of taking down your enemies for revenge. On top of that, Origins introduced Phylakes who were mercenaries that hunted down Bayek. Odyssey instead opens the floodgates to a Shadow of Mordor like system with a seemingly endless stream of mercs coming after you. At times, this can be a welcome source of gear as most of them carry good loot. These encounters begin when your bounty level goes up. Almost like a slower version of Grand Theft Auto’s wanted system. It’s a punishment of sorts for getting caught and having foes at a base call for reinforcements. I’m sure other failures or open crimes potentially raise it as well. On top of that you can find the people in the world who put out these contracts on your character, or even pay these bounties off yourself in the menu screen. However, as long as they’re not too high level and intrusive to your current gameplay, it’s not usually too bad to just keep fighting them off.

Unlike Origins, using your ship is a lot more useful than in the middle of a desert. The Greek Isles offer a Black Flag-eqsue sense of exploration as you hop from island to island. Of course, these locations are typically fully explorable unlike the sometimes smaller areas you’d encounter in Assassin’s Creed 4. You’ll buy upgrades, fight other ships, board them, and even subdue enemies to have them join your available crew roster. These converted foes can be slotted to one of four spots you’ll eventually open that offer a boost to your ship. The world is bright, impressive, and thankfully even adds in a sense of variety with different seasonal appearances in some areas. This keeps things from getting to stale in such an expansive world. Let alone, when you start seeing some of the bigger cities, they really dwarf the areas you discovered in Origins. Alexandria seems like an old wild west town when you reach an impressive capital city in Odyssey.

Overall, if you loved Origins, this is going to be a game for you. By the end of Origins I was content. I didn’t need any more, I felt. Somehow though Odyssey is fresh enough to completely reignite that spirit of adventure all over again. That’s the most important thing here. There’s enough to do and enough different that Odyssey stands out as something more than just a reskin of the previous title.

Maybe I just haven’t found it yet but one thing I would like more of is the modern day story stuff or animus influence. Something that we did get a lot of in Origins in a way was a somewhat spiritual side. In the main story you didn’t really fight any mythological creatures in a real world setting. That’s something that video games have been shirking away from in general lately. Tomb Raider and God of War both scaled way back on the more elaborate enemies you’d discover. Assassins Creed has the ability to do that like with the glitched animus Anubis battles in Origins. I’d like to see a lot more of that in AC. So don’t take that as a knock against Odyssey, since the world is so huge and I don’t know what I’ve missed yet. I’m just saying that not having a heavier precursor focus in Assassins Creed is like the Witcher series not having sorceress. In a series that deals with fantastical artifacts and computer glitches affecting the world you’re in, there’s nothing wrong with more mythology. If anything it opens up more story possibilities. There are mythological parts in the game it seems, but with such rich history it wouldn’t hurt to open it up even more. That’s why the stories in the Witcher work so well. You don’t know what you’re getting involved in. Sure, there’s DLC, but it would help mix up the main game more as well. That’s not to say Odyssey ignores myth. In fact, with the choices you can make in this new release it feels like you can decide to make your character less skeptical. I had a mission that allowed me to decide who was saved by an animal sacrifice. All things considered, this felt odd since so much of Origins and Odyssey feel like they’re pushing toward logical and non-supernatural outcomes to all situations. Yes the choice was in a story context to be fair, but it felt awkward when the other characters took it so seriously. I didn’t believe my character thought it would work.

All that is just personal preference though. Maybe you prefer an uninterrupted historical look at ancient times that focuses on realism instead of the mythological. Really though the out of the animus scenes are so tantalizing now that I’m really wishing I could just get a game of them on their own. Going over the computer records in Odyssey made me wish I could have played some of this content. That’s not to say there isn’t a heavy precursor influence to the story of Odyssey. I just wish there was more. Odyssey is a wonderful hobby, allowing you to plug into the animus yet again and explore an expansive new world. The game is both familiar and also a hybrid of other concepts that just add to the richness. With solid writing that keeps the main storyline interesting and lots to discover in the open world, this is a fantastic addition to the Assassins Creed legacy.