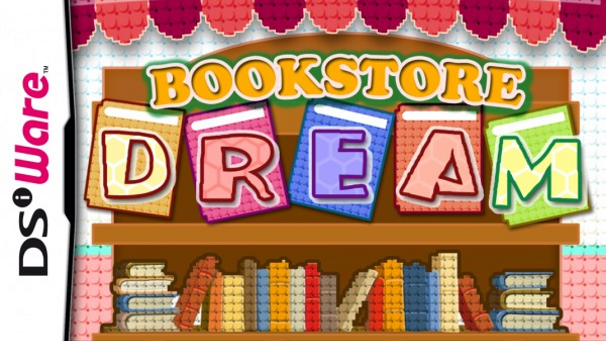 I love simulation games. Taking on tasks that I would never have the opportunity to do in the real world is fun, while playing hosts to the challenges can be rewarding.

Games such as Sim City have always been a favourite of mine, so when Nintendo announced that Circle Entertainment was releasing a Bookstore Dream, a bookstore sim on the Nintendo DS and 3DS as a downloadable title I didn’t need any convincing.

For just $1.99 (or 200 points on DSiWare) the game is worth the money and shows great potential for future sim games from Circle. In the game you are the new owner of an upstart bookstore in an unnamed town. Starting off with $40,000 you begin your little store with the goal of growing your capital to $5 million before the end of the game. But you need to be quick and smart with your buisiness decisions, because you only have 99 days to do so.

To start you only have a business relationship with a small number of publishers and a select number of titles. The titles aren’t all that popular and won’t make you that much money, but you have to start small. As your store gains a reputation (growing your FAME score) and following, more publishers will become interested and be unlocked for you.

Each publisher will give you one title to start with. The more you sell of their titles the better your relationship and the more of their stuff they’ll let you sell.

This all sounds pretty easy, but there is a surprising level of depth to the game. This screenshot from Circle shows day 105. The released game auto-ends after day 99.

Not all titles will just fly off the shelves and requires some strategy in terms of pricing and availability. Titles with a smaller popularity (less hearts) will sell less than those with greater popularity. So simply having those books on the shelves won’t always make a sale. It can take some planning to have more of those books in store in comparison to more popular books to intice your customers to buy them. The more they sell the better your relationship with the publisher and ultimately the more other publishers will want to work with you.

There are multiple items that can be sold at your bookstore, much like the real world. In addition to books you can sell newspapers, magazines, postcards and music titles. Each type of media being sold needs a specific rack as well, with three different kinds available. As the game progresses you can unlock larger displays with more capacity. But each rack will not only cost you the initial purchase but also a weekly maintenance cost.

Maintenance costs are part of your shop’s fixed costs. In addition to upkeep, other things such as paying your staff, paying rent and promotional costs eat into your profit, but eventually aren’t that bad. $90,000 a week in fixed costs become overshadowed once you hit $1 million in sales through the week.

Promoting your bookstore is important as it will get the word out and attract more customers. You can send out leaflets, put up a banner, advertise in a magazine or put an ad on television. Each form of media costs increasingly more, but is worth the weekly investment as it will directly impact your sales. Another promotional opportunity is bringing in authors to your store for a book signing. It will cost you an initial investment to pay for the visit, but the sales you can bring in can make it worth the money.

More promotional opportunities arise in the game, but I’ll let you discover those on your own.

One of the tougher challenges in the early part of the game is balancing your inventory. Making sure that you don’t run out of stock while also not spending all of your funds early on can be a challenge. The game allows you to manage your orders and ‘automatically replenish’ your products once they reach an in-stock level you choose. You can control how much is ordered and when. Just be sure that you have lots of stock on days that you are hosting a book signing to ensure success.

The game is controlled exclusively by the touch screen with no buttons being utilized at all. The action and menus are all easily controlled and is simple to use.

The game is set in the 3/4 view style with the look of Game Boy Advance, with the 16-bit graphics look some of us grew up with. The simple and colourful look lends itself to the simple sim style. Music in the game changes based on the time of day and is also simple and enjoyable. Every sale that is rung through throughout the entire game is accompanied by the ‘cha-ching’ of the cash register. This sound is repeated adnausium, but who can get mad at the sound of making money?

Unfortunately, once you beat the game there isn’t any real incentive to play again. Having 99 days to raise the $5 million, whether you do or not the game ends. The only option is to start again from scratch. It would have been nice for some prize or reward after completing the game to entice the gamer to play again.

For what it is the game is great. It’s deep and has a lot of options and requires strategy. From expanding your business and building a loyal customer base, this game has a lot to offer. Hopefully Circle Entertainment will build on this game and create a bigger and even better sequel.