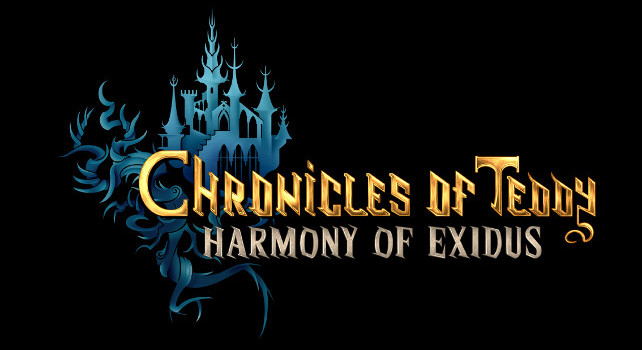 I really didn’t know what to expect when I downloaded Chronicles of Teddy: Harmony of Exodus on my Wii U. I had a basic understanding of the story from some pregame coverage, but didn’t know much aside from the nice pixel look of the game. What I got was a beautiful and challenging game.

This game is deeply engaging.

Right off the bat I as blown away by the visuals in the game. This game has stunning and beautiful pixel art, with the whole thing looking and feeling like a modern game with pre-rendered or CG backgrounds, only they’re not. The game is 100% pixel art and it looks gorgeous. The level of detail in everything, from the character sprites, backgrounds, items, and foreground is all done with an eye for the finest detail.

Another element of the game that I loved, before even getting into the gameplay itself is the audio. Usually these elements I leave to the end of the review, but they are so much a part of the game that they can’t be left as an aside.

Now to the game itself. Chronicles of Teddy: Harmony of Exodus is a side scrolling platformer and in a style similar to the Metroidvania games. In the game you control a young girl, who awakens and enters another realm. In this realm she must collect four orbs hidden in books, scattered through the vast Library of Worlds. There’s a whole back story and history that I won’t get into, but it’s all laid out at the beginning of the game in a scrolling story a la Star Wars.

As I mentioned before the audio and visuals in the game really draw you in. They make what could be just a simple side scrolling experience that much more engaging. There are also a lot of layers to the textures, which does give you a few hidden areas if you explore.

Speaking of the Metroid influences to the game is the acquisition of new abilities, which will then allow you to explore new areas. For example in the beginning you can’t go into water, but once you gain an item to allow this you can explore further and deeper. There are also areas that are too high and out of reach, until you gain the ability to wall jump.

You also have a musical instrument called a Musicom, which allows you to play musical notes at any time. It seems to be influenced by the same concept as an Ocarina from Zelda, but the use of the Musicom is much more complex and woven into the gameplay. Before you can use the Musicom you’ll have to uncover hieroglyphs to play specific notes.

Using the Musicom is also key to solving some puzzles, unlocking some doors, and more in the game.

The notes played by this instrument also form the basis for a language, with certain notes played in a specific arrangement forming words. You’ll learn these words by being spoken to by characters in the game, which will unlock these words and add them to your Lexicom. This is key as they will also occasionally give you hints on certain things to say to certain characters, which will let you proceed in the game.

And while this does help, the game in no way holds your hand.

You’re a little girl in a strange world that is filled mostly with creatures that can hurt you. You’re pretty much on your own and really have to figure out what you should be doing and where you should be going. There is no helper fairy telling you what to do next or where you should be headed. At times the game can feel like a big world. As you play and defeat enemies, destroy pots, or open chests, you will start to collect little orbs. You can use these at a sorta shop in the Library of Worlds to upgrade your weapon and armour, heal yourself and more. Though do be careful with your life. While you can buy an item that will restore you if you fall, if you don’t and you do happen to die you’ll lose HALF of your treasure. Keep that in mind. Though when you’re in tough spot you can always save and reload the game, starting back at the start of that particular world.

Chronicles of Teddy: Harmony of Exodus is very fun to play and very engrossing, but there are a few small quibbles I had with the game. I played this on the Wii U and the game is fully playable on the GamePad. One thing that the game doesn’t support is touch screen control on the GamePad at all. While very minor, it would have been nice to tap the Musicom instead of having to scroll through with the controls. There is also no control customization. I like my jump button to (B) and (A) to be my attack but the game uses (A) and (X) instead. Again, this is a very minor thing but having an option would have been nice.

One final note on the game is another mention of the visuals. With the game taking a page out of the Metroid series, the game is broken into different areas or ‘rooms.’ When you leave an area and return again though a door for example, the enemies often reset. This is very handy when you want to save up and earn currency to unlock upgrades.

But one other thing that is unique is that the level of zoom between the rooms isn’t always the same. If you’re in a small room or a cramped space your character may be large on the screen with a very limited view of the room. If you’re in an area that is massive you are a very small figure on the screen compared to the vast area surrounding you. It’s a pretty neat thing and adds to the atmosphere of the game.

If you like any of the Metroidvania styles of platformers than you will likely enjoy Chronicles of Teddy: Harmony of Exodus. I had, and am still having, a lot of fun with the game. Truth be told I sometimes boot up the game and let it sit on the title screen for a few minutes. That ambient sound of a light breeze blowing through the grass with the windmill in the background is very calming.

The game retails for $19.65 CAD (stupid exchange rate) and is rated “E” for Everyone by the ESRB.