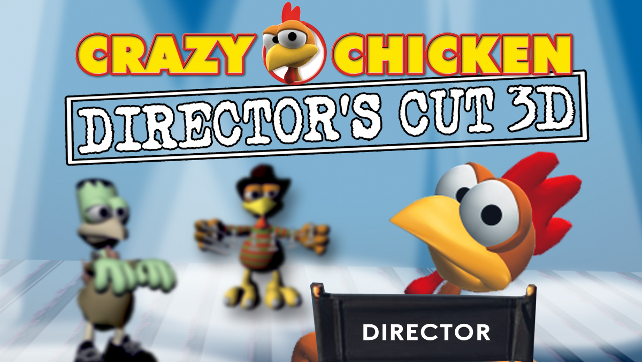 Crazy Chicken: Director’s Cut is a simple and entertaining game which is simple to pick up, easy to play and actually quite fun.

The game is a follow up to Crazy Chicken: Pirates 3D which was released for Nintendo DSiWare late last summer. Whereas that game took place in a sunny beach setting, this game takes place in two unique movie set settings.

Each level is filled with chickens moving back and forth along the environment. Some of them walk by in the foreground while others fly passed in the back. The point of each level is to shoot down a specific type and number of those chickens. Some levels may also request that you shoot a set number of other items which are hidden in the level.

As the mode starts off you are given a set number of limited shots. You are challenged to shoot the total number of required chickens before running out of ammo. Shoot wisely. While you are given a refill of ammo at the start of each level you are not refilled entirely but rather just topped up. Don’t waste your time shooting any chickens which are not on your list as they don’t count towards your goal. When your ammo runs out it’s game over. 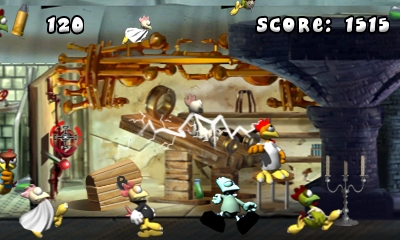 Levels are also fairly large and animated. Rather than just utilize the screen each level is about twice the height and more than twice the width, which will require scrolling around to really search for the items and chasing down the chickens.

The user interface is pretty simple to understand as well as easy to control. Moving around the environment is controlled by either the joystick or the directional pad. Moving your cross-hairs is done with the stylus, as is reloading, while shooting is controlled with the [L] button. The controls are surprisingly intuitive.

One thing that I really liked about the environments are the detail that was paid in creating them. The two levels included includes one based on a sci-fi movie set (Star Wars) and a monster movie set. There is a lot of humorous detail included in the character and the environments in general. 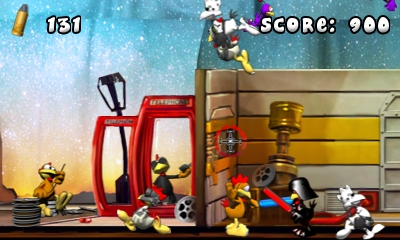 If your 3DS is connected to the internet as well your high score is automatically added to the game’s online leaderboard.

The game isn’t that long or complex so Teyon has set the game at an appropriate price of just $1.99 (200 points on DSiWare). For such a reasonable price you can’t go wrong.