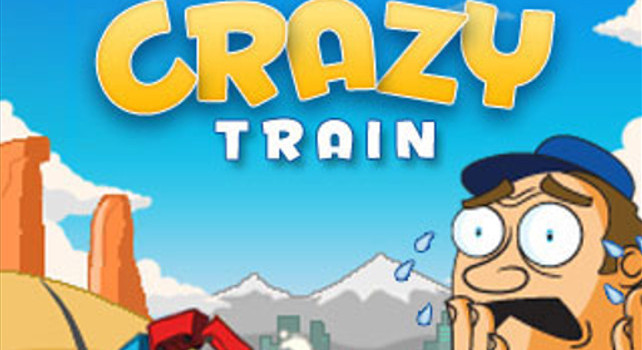 I must say that I really appreciate developers who are still supporting DSiWare. Sure the Nintendo DSi is considered an old system now, what with the 3DS/3DS XL and New3DS on the market, plus the eventual release of the mysterious NX, but there are millions of people who own a DSi. Nearly 40 million DSi/DSiXL units were sold worldwide though the systems lifespan, so there is clearly a base of users there.

Crazy Train is the latest DSiWare title to hit the DSi Shop. And of course any DSiWare title can also be picked up in the 3DS eShop as well.

Crazy Train is an easy to learn and hard to master puzzle game that’s a highly addictive. In the game you’ll take the role of, well you, as you pitch in to help hopeless train director Lionel Steeltrack. He’s always loved trains but has lost his nerve and needs your help sending passenger and cargo trains to their correct stations! You’ll need to make sure that they not only make it to the proper station, but also don’t collide with one another. That would be bad.

You’ll also have to deal with the occasional track failure and sending repair trains to fix up those tracks.

This seems like a really easy task, and sometimes it really is. But once you start getting trains coming in from the top and bottom of the screens it can become a handful. As you try to balance moving trains and pulling your hair out.

For the most part the trains will enter the screen from the left side. There are usually four tracks, each with a red signal light. When the light turns green you’ll know that another train is on the way. Thankfully the game doesn’t send multiple trains at once, but they do come in short succession so you’ll need to keep on your toes. Your task is to flip the switches to guide red (freight) trains to the red stations and blue (passenger) trains to the blue stations. To flip the switch you touch the switch arrow and slide the stylus in the direction you want the train to go. One word of advice though. Once a train has gone through the switch, put it back or else the next train will follow the same path.

There are three sizes of trains, each with different speeds that have to be taken into account. A single car train (the smallest) moves much faster than a three car train (the largest) so if they are heading in the same direction you may need to switch the track so that the smaller train doesn’t collide with the larger one.

You’ll have just one chance before you have to restart the level. Sending trains to the wrong station is also a no-no, however you’ll have three strikes before you fail out in this regard. Though occasionally little green orbs will appear on the track. Collect one of these to be forgiven one of your misdirects.

The main game has a story mode where there are four unqiue track layouts to complete, each with four stages. There is also a challenge mode where the difficulty and speed is ever increasing. You’ll basically get to play for an unlimited number of tries until you fail out.

I did come across two glitches in the game though my playtime. One occurs in the second track layout called High Plains. In this level trains come from four tracks on the left side of the screen as well as a single track from the top and bottom. If a large (three car) train comes from the top or bottom and you set the switch to send the train towards the left side of the screen (stations are on the right) the train blows apart. The first car of the train follows the track and switches, but the other two cars in the train float around the screen aimlessly. Once the first car arrives at a station these cars will vanish, but they are real objects and if they float into another train the game considers this a collision and you’ll fail the stage.

The second glitch occurs with broken tracks and the challenge levels. Specifically on the Alpine Run level. Broken tracks appear at random and will stay until you successfully guide a green repair train to the track. Occasionally the broken track will appear on track on the edge of the screen, between the last switch and the station. When this happens the repair train won’t fix the broken track and passes right through, thus leaving the station exit unusable. It’s a minor glitch, though it did up the difficulty of that challenge.

Overall the game is pretty fun and definitely a good challenge. It’s got a pleasant, simplistic style and the music is both appropriate and catchy. Add this to the fact that the game is priced really well at $1.99 (200 Nintendo Points in the DSi Shop) and you’ve got an easy buy on your hands.

You should definitely check out this Crazy Train.