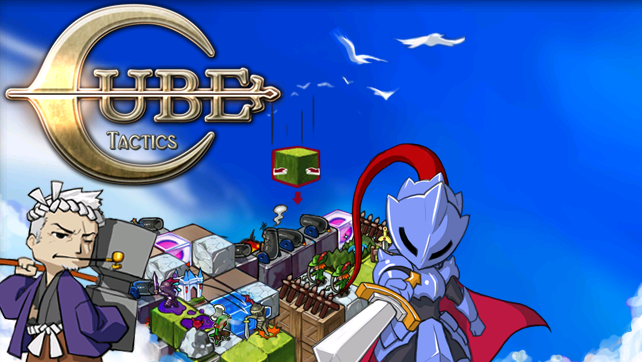 I wasn’t sure what I was going to think of the game at first, especially when playing through the first few levels of the tutorial, but I have really become addicted to this game.

Any game that bears the word ‘tactics’ in the title really has a big name to live up to. For me that word reminds me of only one game, which I often merely referred to as just ‘Tactics,’ and that game is the classic Square Enix game Final Fantasy Tactics. The game was such a deep and complex game, and was so satisfying of a game to play, that many other games to bear that word in their name haven’t lived up to my expectation. But Cube Tactics isn’t the same type of game as you would think. Though they are both feature battling your opponent’s units in order to claim victory, this game bears more of a similarity to Lemmings than anything else. This comes from the basis that while you can place camps to produce your units, you can’t actually control them. Set down a camp to bring out knights, mages and archers and they will slowly emerge for battle. But despite what you might expect there is no way to select these units and instruct them what to do. They will come out and begin searching for enemies to destroy.

The ultimate goal of each level is to destroy your enemy’s core cube. Once this has been accomplished the level is complete and you can move on to the next one. And while you can’t directly control your unites, you will have to use some strategy to build and place your camps to guide them where you would like them to go.

At the top of your screen when the battle begins you are given five different options for cubes you can place. These may be camps but also could be a number of other cubes, such as poison swamps, catapults, magic towers, cannons, empty plains or a number of others. You can also stack cubes on top of empty plains to build up walls to block your opponent. They can climb the walls though, so it won’t keep them out for long. Walls are also useful for stopping cannon fire temporarily.

I mentioned that the game kind of feels like Lemmings. If you’ve even played that game you know how frustrating it can be when the little creatures don’t go where you want them to go. That feeling creeps up here as well, but not as much. One thing that is helpful is that your units are unlimited. As long as your base camps haven’t been destroyed by your opponent, they will continue to pump out units until the level is complete. The game also has a lot of multiplayer and battle modes as well. You can play random levels with one, two or three opponents where the goal is total domination. One hitch to this task is that all of the teams share the same block resources. So you must be fast to claim the cubes you need to advance your invasion before they’re scooped up by the enemy. There are also vaious difficulty settings to choose from for your opponents, and also various level sizes to choose from. It really adds to the fun of the game.

The game supports online multiplayer as well, which is also pretty fun to play.

If you’re looking for a unique and challenging game, which some personality, definitely check this out. It’s definitely worth it!