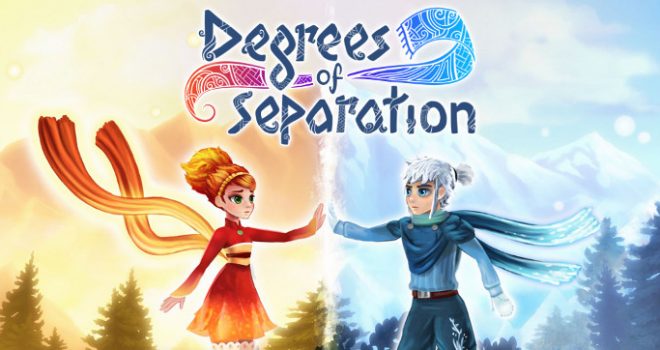 Degrees of Separation is a beautiful and clever 2D puzzle platformer.

I’ve played my share of puzzle games, 2D platformers, as well the combination of the two. Puzzle platformers can be pretty satisfying to play when they are done well. Degrees of Separation takes the concept of the genre and throws in a twist that is both challenging and satisfying.

The duo of Ember and Rime are from different worlds. Ember is from a warm, spring like area while Rime is from a cold, frozen area. No matter where the two of them go the environment s of their distinct worlds come with them, thus changing the environment around them. The constantly fluctuating environment adds to the complexity of the puzzle designs.

Ember and Rime use their contrasting powers to manipulate heat and cold to overcome obstacles. Through cooperation, they will learn about each other and the fate of their worlds.

For example when Ember approaches a pool of water she can slip beneath the surface and walk under the water. However when Rime approaches the same body of water it freezes over and he can walk across the surface. Other things can change around them as well, including chutes of steam which stop when Rime gets too close but which Ember can interact with. Separating the two characters is a long border across the screen. The characters can’t enter the environment of the other one. As one character climbs to a higher elevation the dividing line between them shifts and tilts. By strategically moving the characters you can interact with the environment and cause things to change or move around, allowing Rime or Ember to get into different nooks and crannies in the area.

The game is broken into different areas which are accessed through a central castle. The doors to the different areas are sealed and need to be unlocked. You do this by collecting scarves that are scattered around the areas. This is where the puzzle element comes into play as you need to figure out how to reach the scarves by manipulating the environments. And as you reach different areas you’ll gain new and innovative abilities including the ability to freeze in place the “separation” between Ember and Rime, or a cloak that will let the characters interact in the other’s environment temporarily.

Degrees of Separation can not only be played single player where you will alternate between moving each character (you can also call out to have the other character wait or follow you at any time) but you can also play the game co-op with another person working with you. I personally found it more difficult to play with another player as I find it easier to solve puzzles without having to explain my solution theory to another player. But it’s totally an option.

The game has a very zen feel as you play. The beautiful tranquil environments are done in a soft and pleasing art style. The music and sounds in the game area also very relaxing, both soft and calming, as is the voice from the narrator that tells the story as you progress through levels.

I really enjoyed playing Degrees of Separation. The game is a very relaxing play and the brain teasers are just challenging enough to make them tough but not impossible. And the introduction of the different game mechanics in each level gives a nice variety to the well crafted levels.