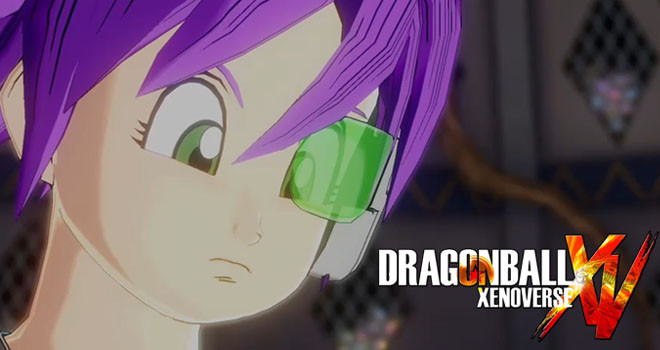 With a concept as grand as creating your own character and sending them out to save the Dragon Ball Z timeline, XenoVerse has a lot of promise to live up to. Usually most fighting games like the Dragon Ball series can end up retelling tales we already know. Sort of a best of collection of moments. In XenoVerse, you go beyond that to see moments reimagined with a darker outcome. So does the game live up to the hype?

XenoVerse seems to be an improvement upon what Battle of Z set out to do. It is a fighting game of sorts, but also you have free roam to not lock on to an enemy and wander the rather large arenas. I didn’t get to play much of the predecessor, so I’m only going by limited demo experience here. To me, XV feels more solid. Battle of Z had a good concept, but XV improves upon that and adds it’s own game world to the mix, as well as other elements.

You’ll begin your adventure by battling as Goku in a few tense moments through the ages. After these quick fights, you’ll be brought to the character creation screen. Now here’s the hard part, the character you make here is the only one you’ll have until the end of the story right now. I’m hoping this is fixed in a patch. My character is a lot of fun, but I wish I’d known I would be locked me out of the seven other slots until I beat the game. I’m fine with my character, but shortly in I wanted to try out a Majin. No such luck until I complete the game. So think hard about who you want to play as before you commit. Not that you can’t delete your character, but still, who wants to do that? 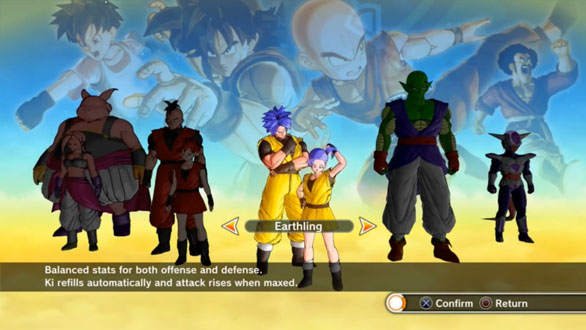 With that warning aside, you do get a lot of character options. You make your selection of male and female Majin, Saiyan, and Human, as well as gender neutral Namekian or Frieza’s race first. Then you get to select your characters hairstyle, ears, eyes, jaw, lots of details as well as the colors of your initial outfit. We have a great writeup about all this here. You also select if you’re a near rage fighter, far, or a balanced combatant, as well as your voice and name.

After that it’s off to Toki Toki City where you’ll meet Time Patrol Trunks who will spar with you and then let you loose to explore the city and decide if you want to join his team. Needless to say, after wandering the city and then talking to Trunks again, you’ll end up joining. The city has three areas which are pretty basic but efficient. It’s sort of like being in a small town in World of Warcraft that is split into three districts. This is also where you’ll see other player created characters and NPC’s. In general, it’s a hub and an RPG town in one. 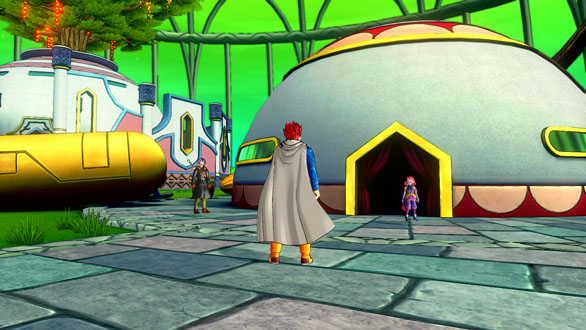 Besides story missions which you’ll go off into a side area for called the Nest of Time, there are also parallel quests. These are situations you’ll unlock that are rather light on story but pit you against various foes and give you specific tasks. Some may even be focused on items, such as finding the Dragon Balls on Namek. Parallel quests are a great way to level up, and even better they also can provide random loot drops so you’ll want to replay them over and over. It’s fun going through older missions too since you’ll get to see just how powerful your custom character has become.

Clothing items are one type of loot that drops, as well as something you can buy in the Toki Toki city clothing shop. This is one of the big draws of the game, letting players design their own awesome looks by mixing tops, bottoms, gloves and shoes. In a separate store you can also buy accessories. Sadly, accessories don’t seem to give you stat boosts as most clothing does. However, stat changes don’t seem to be that much of a difference, especially early on. As I progressed in the story, things got tough and I went for function over style and got the outfit that complimented my stats I focused on. So you can focus on customizing more than the small boosts, but every little bit helps in serious combat.

Oddly you can’t view the clothing options before purchasing them. This is a huge let down with so many items to choose from. Sure as a hardcore fan, you’ll know what you’re buying potentially, but others will feel left out in the cold and having to spend their hard earned Zeni to see what each item looks like.

Besides clothing, you can also buy capsules and such that can help you in combat. For the first part of the story missions, I didn’t bother with these. I’d play through like I was playing a regular fighting game. As I progressed, I’ve switched to playing the game more like an RPG. I level up when I can and carry healing items on me into combat, of which you can have four types of at one time. Things do get more difficult too. Some battles just feel insane, and others can be completed with relative ease. Frieza was probably the most problematic early on. 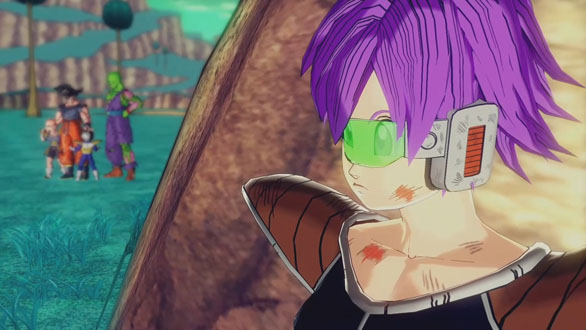 As usual in the series, cut scenes do look nice. There’s even the rare 2D scene included in the game. Lip sync isn’t always exact but with how great things look, it’s usually not much to be concerned with. Arena’s have decent content to them, letting you wander the area or even destroy some objects. Using your scouter or sense, you can even look for hidden items to pick up that you’ll receive if you beat the mission.

Upon completing a mission, you’ll be rewarded with both experience points and Zeni. Even upon defeat you do get a consolation prize at least in those categories. You do receive higher rewards for tougher missions too, so the game does encourage you to push yourself. Through the game, your character will level up. You’ll be able to put points into various stats too at three points per level. This provides you with extra health, strength, stamina, ki, and such to balance out your character to your play style. This can seem daunting at first, and it can be since you do indeed need to level up unless you’re an expert combatant.

Speaking of combat, the game does have a great flow to battle. Being able to fly around, slam into your opponent and unleash a combo before teleporting behind them and delivering another blow is quite exciting! You do have options to mix things up. Various skills are available to find or purchase that you can equip to your character like clothing, both for energy or strength based attacks. Ultimate attacks are also included which allow you a good advantage as well. These are easily accessed by the shoulder buttons at the top of the controller. Combat has a good mix of action, so you do feel more like a fighter in the world of Dragon Ball Z fighting back an opponent, rather than just mashing buttons and hoping for the best. 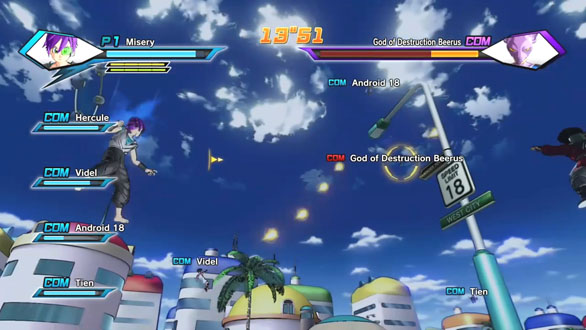 As fun as combat is, it can become a frustration at some points. Charged heavy attacks are used to break through a blocking opponent. I felt sometimes the game wasn’t registering when I tried to start charging one. Maybe you need to be still when the process begins, but that did lose the feel of immersion a little bit since I’d need to slow down, wait, hover, and then press heavy attack and hold it to charge. It’s not a game breaker, it’s just something I wish was more fluid in combat. The hardest battles I’ve fought so far involve foes that can block nearly anything coming their way. This both can make for challenging battles, and frustrating moments. Other battles sometimes just instantly flip to being easy when you get through some lucky shots that aren’t blocked.

Online combat is quick and easy to get into. Unfortunately the server in general for the game has had issues lately, but thankfully you can play offline. We can hope this is because the game was even more of a success than anticipated. For online battles, you’re either hosting or seeking an opponent. You can choose other fighters, but most players I encountered just use their custom character. Of course, this is a lot of fun. Unlike AI opponents, you’re never sure what other gamers will do. Typically most battles I’ve fought start slow, with each other seeing what style could be used. Then things heat up. Surprisingly, most battles I fought were quite evenly matched with only a sliver of health being the deciding factor. All things considered, this mode is the big replay value. I wish there were more rewards for online battles since besides from ranked mode which you can score or lose points in, it’s really just a way to test your might. Unfortunately you don’t gain experience in online battles either. 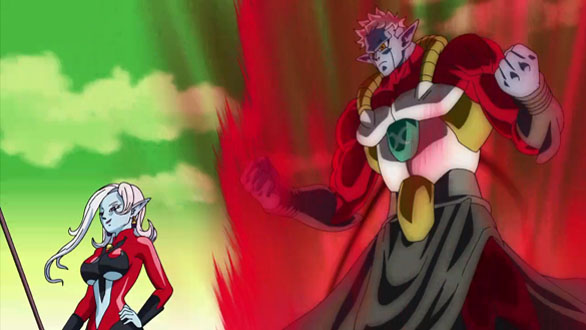 The real part that makes the game a worthwhile addition to your collection is the story. Everything else is awesome, but it’s the story that ties it all together. There are some surprising moments, and Towa and Mira from Dragon Ball Online are great additions to the action. It keeps the tale feeling both fresh and familiar, which is exactly the balance that is needed here. Expanding upon XenoVerse would be a treat and hopefully we will see more of this series.

Over all, there is a lot to do! Hopefully the server issues will be resolved quickly and we’ll get to see the full potential of Dragon Ball XenoVerse. The game itself has a fun story, characters you can train under which essentially means you get to spar with them occasionally in new quests to earn skills, and it’s fun to develop your custom fighter. With so much content, and then the focus of battling online to keep the replayability going after the story is over, XV has a lot going for it. Especially if you’re a fan of the series, it’s a sweet addition to your collection!