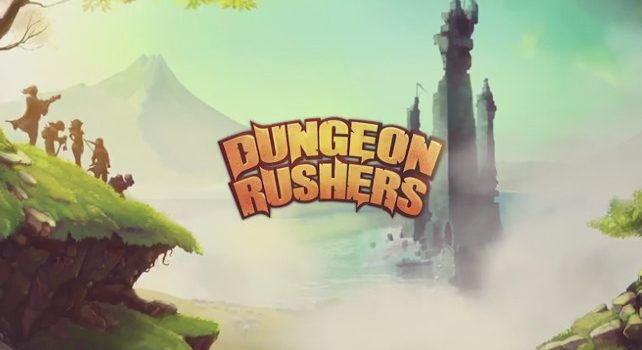 Dungeon Rushers is a Heroic-Parody tactical RPG combining dungeon crawler gameplay and turn-based fights. The game was originally released on Steam. The layout of much of the game, the way battles work, and the inventory management system, feels very much like a PC game. Some of the changes made for the console release facilitate the lack of a mouse pointer, focusing on controller buttons for everything. This change however made things clunkier.

This review was done on the Nintendo Switch edition of the game.

While you’re playing in tabletop or handheld mode, you can use touch screen for some things. You can navigate through already explored areas of the dungeons by tapping on the screen for example. Tapping a far off point will move your character coin around the dungeon automatically. You can also tap on a character in battle, or an enemy for that matter, and then tap on the character icon in the corner of the screen to get stats and their moveset. Unfortunately there doesn’t seem to be a way to do this with the buttons for your own party so if you’re playing in TV mode this option seems to be nonexistant.

It feels like the game would have been better suited to use the R stick as a curser to move and select things, much like a mouse pointer in the Steam game. The R stick isn’t used during battles at all and is only used to sort through your item categories while in your inventory. 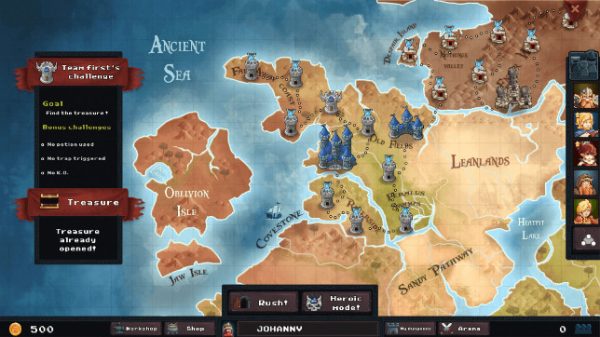 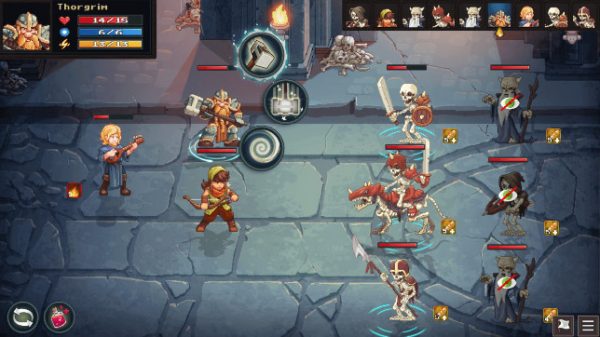 The bulk of the game is spent searching through dungeons, fighting monsters, and collecting gold and loot. The loot you find can be used to craft weapons and other items, while the gold you find can be used to buy weapons, supplies, other useful items. The store only stocks a limited supply of eight items at any one time and only restocks after you finish a dungeon, whether that is successful of your team falls. One apparent glitch in the shop happens when you’re buying items. There is no prompt of “are you sure” when purchasing anything with your gold and occasionally I ended up buying two things unintentionally, often not even knowing what I spent my hard earned gold on.

Each character has three moves during battle. Some of their attacks or abilities require mana. The characters also have other abilities that are like support abilities which take place in the dungeon outside of battles. These abilities, which take energy rather than mana, can range from things like putting enemies to sleep prior to a battle or disarming dangerous traps. They can definitely help you get the edge up on incoming difficult battles.

The characters also have other passive abilities that can be used within dungeons, unique to each character. Elian for example can see forth and uncover unexplored areas of the map within two squares of your location. Another vampiric character named Melinda can smell out a random monster group on the map and will also give your party an attack boost during the ensuing battle.

There are also events and artifacts scattered around some of the dungeons too. Some of these give you loot while others give you a random blessing or curse. Some give you blessings give you positive status effects, and some curse you with negative effects. Status effects, like poison or regeneration, only have temporary effect. Interestingly the icon on the screen which shows your status also shows how many turns until it wears off.

Battles themselves are pretty straight forward. As you might expect there is a turn list which shows which character moves next. This can be a great asset to your strategy as you can choose on whom to focus your attacks. One of the problems is that if there are more than one of the same type of enemy it’s impossible to discern which one of them will go first. The previously mentioned difficulty with checking enemies’ statuses in TV mode, or having to keep switching hands in handheld mode to go from buttons to tapping the screen is also cumbersome. 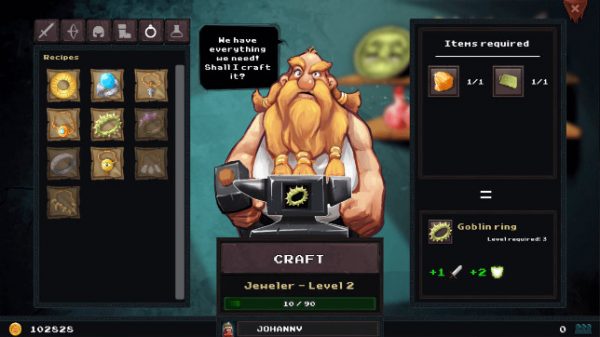 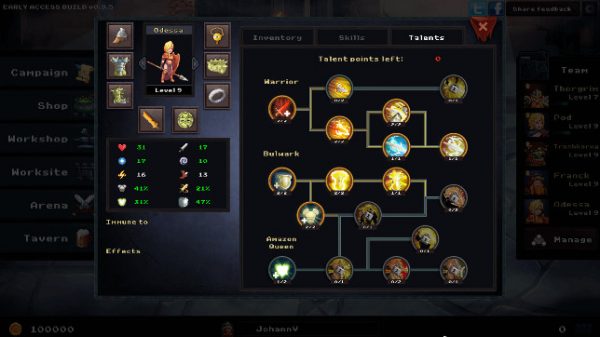 For the most part each dungeon has a specific layout, set with specific enemies, traps, and treasure goal to finish the level. There are several manors also scattered through the world which consist of five floors of treasure. These manors consist of randomly generated floors, which make the necessary grinding more palatable. This was my only real gripe with the game.

It’s not a new thing to have to grind in an RPG, whether it’s traditional, dungeon crawling, or action. Leveling up and making your characters stronger is all part of this type of game. I found the level progression in the game very tedious however. The amount of experience you earn after battles is so low that even after nearly ten hours playing through the game my characters were barely level four. There is only so much you can do and only so far you can get when your characters are limited in strength and armor. And with the little gold you earn from said grinding, it’s also a challenge to buy enough healing potions to push through the harder dungeons even if you’re a little under-leveled.

Crafting is a helpful way to whip together some helpful armour and healing potions, especially since they’re a bit pricey in the shop. I found it was a better strategy to leave these items alone in the shop and just pick up crafting items. It’s cheaper to make some of these items than to buy them, that is when you don’t accidentally buy something as mentioned previously.

Overall Dungeon Rushers is a pretty straight forward dungeon crawling tactical RPG. It has some flaws, but if you can push past them there is a fun game underneath. With the somewhat repetitive nature of the game, Dungeon Rushers is a game that is good to be played in short bursts.