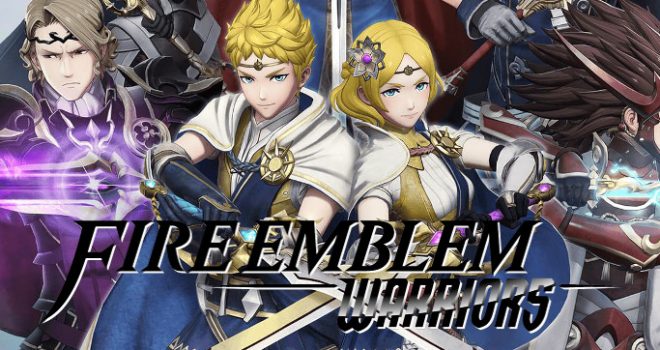 Fire Emblem has become a blossoming franchise for Nintendo, even if the series itself has been around for nearly as long as Mario and Luigi. While originally a Japan only franchise, it has been localized and introduced to western audiences since the days of the GameBoy Advance in 2003. There have been multiple entries on the Nintendo 3DS, a hit mobile title, and even a collectible trading card game (albeit in Japan only). Fire Emblem Warriors is the first title for the Nintendo Switch, however it’s not the typical Fire Emblem game.

The game is similar to what we got over the last few years with Hyrule Warriors for the Wii U (and subsequently the 3DS and Switch versions later). It’s a hack and slash fighter where you take control of forts, defeat enemies, and complete objectives. These objectives usually boil down to defeating specific enemies or taking control of specific forts. The game has a narrative which strings the levels together.

Fire Emblem Warriors takes some of the unique elements of Fire Emblem including the weapon triangle. If you’re familiar with the series it’s similar to the rock-paper-scissors dynamic where one weapon type has an advantage over another. Also too certain character classes can have a serious advantage or disadvantage over another. For example archers are extremely effective against flyers. It’s best to strategically use your units with this in mind. A pretty cool feature of the game, which is different than Hyrule Warriors, is that you can switch between your different playable units. Whereas before you played as one singular character, this time you can jump between them at will. In addition to that Fire Emblem Warriors takes the entire strategy aspect of the core Fire Emblem series to heart and allows you to direct each character where to go and who to attack from the pause menu at any time. It can pull you out of the action of the game to give your characters directions, but the control is definitely appreciated. This is especially true when a new mission pops up mid battle which gives you multiple targets. You can instruct other units to head in one direction while you head in another.

You can also just let the other characters do their thing automatically with the help of some AI preferences – set to attack or defend.

This is one of the difficulties I had with the original Hyrule Warriors. In some missions one of the fail conditions was to not let an allied base fall. At the same when the victory condition was to defeat a certain unit I kept having to run clear across the map to prevent the keep from falling. It made some of the missions there monotonous. The ability to jump between characters in Fire Emblem Warriors was a godsend.

Another interesting feature in the game is the ability to pair up units. When you get close to another character you can pair them together, meaning that you control one character while the other one sits in reserve. It’s akin to some tag-team battle fighting games where you can swap them in and out at will. One of the advantages of doing this is to pick two characters who have opposite strengths and weaknesses. When you run into a character to which you are at a disadvantage, swap to the other character who will be at an advantage against your foe. It gives you one less playable character in the level to direct but it can make it a little easier to steamroll through the swathes of enemies.

Speaking of characters, there are a bunch of well known Fire Emblem characters in the game from many of the franchise’s recent entries. Fan favourites such as Chrom, Marth, Lucina, Camilla, and Robin are all in the game as well as a bunch of others.

One thing that I always appreciate in games is fully voiced cut scenes and Fire Emblem Warriors does this perfectly. There are a lot of fully animated story sequences which look beautiful, all of which are fully voiced. The smaller sequences before levels that have “talking heads” to advance the narrative are also fully voiced. While there isn’t a huge abundance of dialogue or cut scenes, it is nice that they are voiced. Through each battle, whether it be in story mode or history mode, you’ll pick up weapons and materials as you play. These can be used to refine stronger weapons as well as create crests for each player. The crests can strengthen your warriors, level them up, as well as give them the ability to use new weapons or abilities. This is above and beyond the actual leveling up that you can do with each character.

Along with the main story of the game there is history mode. Revisit classic battles from previous Fire Emblem games and play them in the Fire Emblem Warriors style of battles. You may even earn special rewards. Once you finish all of the included history battles in the game, of which there are plenty, you can unlock even more through DLC.

Included with the new history DLC battles are new Fire Emblem characters to take into battle. Each pack contains three new playable characters, three new History scenarios, new weapons and costumes, and new support conversations. I’ve never really been one personally too excited for paid DLC, but if you’re already a fan of the Fire Emblem series just feels worth it.

I had much more fun with Fire Emblem Warriors than I thought I would. After Hyrule Warriors I didn’t have much appetite for another Warriors game but I was proven wrong. The Fire Emblem series felt like more of a natural fit into the Warriors style gameplay and was actually more fun than I expected it to be. It’s both brute force hack-and-slash and strategic, but overall fun.