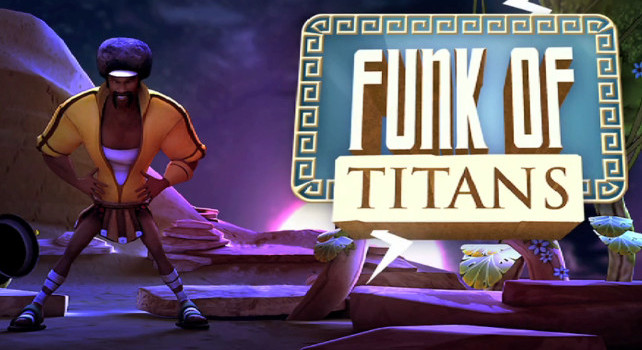 To me, Funk of Titans reminded me of classic Super Nintendo / Sega Genesis era games. The game has a simple focus, but it’s fun and has quality characters. Sure, all you do is automatically run through each stage and time your jumps and attacks accordingly. But it’s an enjoyable ride. Where else can you have a dance off QTE mini game event against a queen of pop version of Medusa who comes off looking like a Lady Gaga parody? Even the bonus items you can buy are comical and parody driven.

Playing as a funk loving Perseus with an afro, you’re sent out into the world to bring back the funk by your father Zeus. Along the way you collect golden records, try to find your rocket powered Pegasus idol, and avoid taking damage in each stage. The three worlds are displayed in a Super Mario Bros. 3 sort of map where you select which level to visit next. A mini boss battle and final battle are quick time event challenges. I had a lot of fun with it!

Not only is it just fun in the sense that it’s such an absurd concept, the game almost has the feel of a rhythm game. You’re not trying to time your moves to the music though, you’re just trying to time each jump and attack right so you can continue to progress. You can also wall jump. Perseus is constantly moving forward and you can only take two hits until he needs to start the level over again. 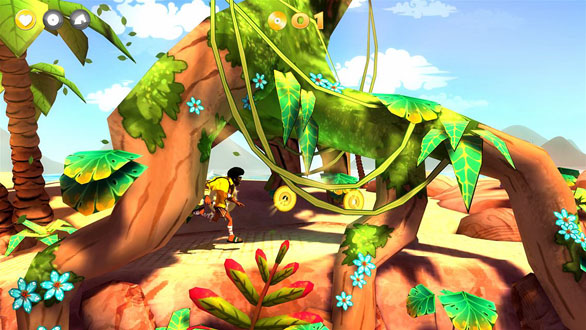 Each stage has 100 golden records to collect as a goal. On top of that, collecting the Pegasus Idol also nets you a bonus game at the end of the stage. The idol itself is even prominently displayed in the stage with a parody American Idol sign. The last challenge you’re given is to avoid being hit at all in a level. Do all three of those and you’ve earned a gold rank for that level. Honestly, it’s fun to go back and try for that. If that isn’t enough to keep you replaying though, there are a list of Zeus’ Heroic Missions which allow you to level up by beating three at a time. Leveling up only gives you access to new helmets and weapons which are basically cosmetic upgrades but they’re still cool. Different weapons also allowed you to destroy special doors in some levels that are made to react to those specific ones.

I was a bit disappointed by the fact that enemies don’t really change over the course of the game, but it wasn’t a deal breaker for me. The stages are well designed and they do pose a fun challenge. Funk of Titans isn’t really hard, but it’s difficult to master. It requires you to think fast. Some foes have spikes you’ll want to avoid running into with an attack, or jumping on top of. Others you will want to stomp to get a jump boost up to an out of reach ledge. It’s these quick thinking moments that make the game fun. Thankfully the game is occasionally forgiving with some badly timed jumps. I’ve had times where I should have missed a foe but still landed on them despite being a bit back. Other times you may leap into fire, get stuck, and take your two hits there however. So it kind of balances out. Levels are full of enemies, spring boards, fire traps, doors and vases to break open, and of course one Pegasus Idol per stage to find. 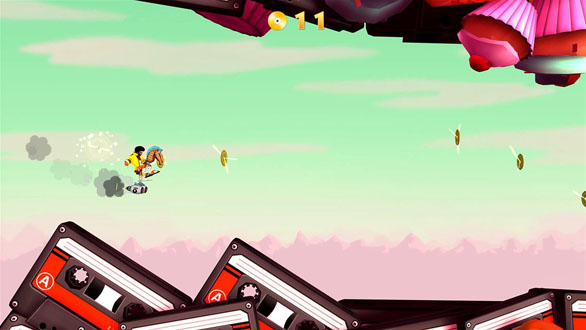 One thing I would have liked was the map screen to display the name of the stage you’re about to enter. As it is, you only see the stage name after you select where you want to go. This would have made things like walkthroughs and online questions easier. Then when you name a level, others would be able to zip around the map to find it faster. Sure there are things like level 1-3 to inform others of where you are, but it would have been a nice touch.

Funk of Titans does what it promises. There are lots of levels to play through across the three worlds, and lots of keep you replaying for fun. The music is even very enjoyable though there could have been more variety to stage themes, or perhaps specific themes to each world. But then again, you’re bringing the funk after all, not listening to the music you’re fighting back against. It’s not a really long game, but it’s a fun one to play. That and for sure, your friends won’t believe what the game is about and when you show them it’ll be good for some good laughs. That cute charm is what makes Funk of Titans work. 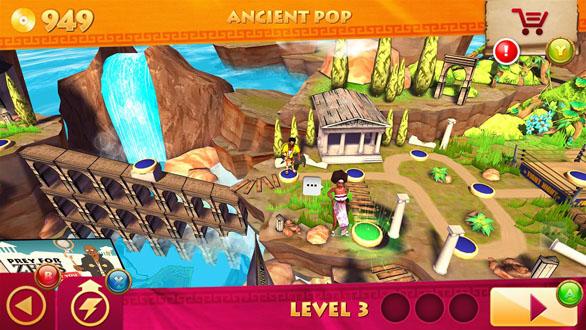 I’ve been eager to write my review for Funk of Titans but it seemed something was always keeping me busy. Within the first couple of days I’d been so into the game I’d played through the whole game and enjoyed the process. Now just sitting down to finally share my thoughts, I’m shocked to see so much dislike for the game online. Does it feel like a tablet game that’s polished up and easy to play with a controller? Sure! But with how big of a market app games have become, how can we really call that a bad thing. It’s an enjoyable game and there aren’t even any micro transactions here. I’m not saying that everyone isn’t entitled to their own opinion. I just found a lot more worth in Funk of Titans. It’s comedy and charm really won me over.