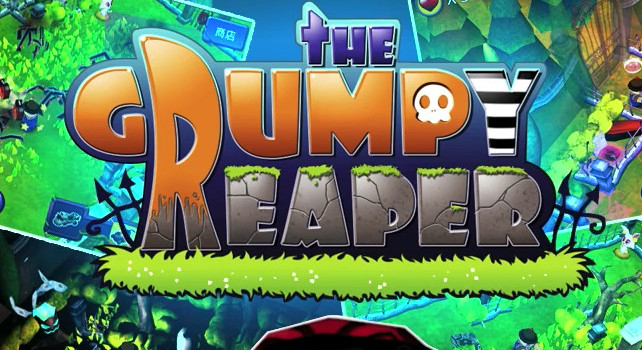 The Grumpy Reaper is kind of a hard game to peg. On the surface it looks like it could be a pretty fun game, however once I started to play it there were things that nagged at me.

In the game you take on the role of Grumpy, a gardener I think. Most of the story introduction is done though slides, and they were somewhat tough to follow. I got the gist of the plot of the game through the online description, though to be honest the story doesn’t really matter that much.

Here is the plot: Death’s granddaughter has stolen the keys to the Underworld to unleash creatures on the world! Take on the role of Grumpy, mow the lawn and find the lost keys to help Death solve this problem.

So you play as Grumpy and you have to mow the lawn in each level’s graveyard. Every level is a graveyard, or at least every level that I played was one. The goal of the game is to collect keys, and the way you complete each level is to cut all of the grass. Grass is scattered around the level in little patches. Once you find and mow through them all you will move on to the rest. But what about the keys?

You can get up to three keys in each level. One key is given to you by default when you complete the level as a reward for cutting all of the grass. Another key can be unlocked by beating the level within a specific time limit and the final key for defeating all of the zombies and other enemies in the level.

Of course there are zombies. It’s a graveyard after all. Duh.

For the most part the zombies just wander around and don’t interact with you, save for a few that will seek you out and chase after you. Others will pop up from the ground and chase you down. Running away from them isn’t that tough, however movement in the game is limited to right and left turns as you move in a grid based pattern. It feels somewhat limited and clunky.

I mentioned that you can defeat the zombies. You can, but not all the time. In order to defeat the zombies you’ll need to collect fuel, which occasionally pops out from patches of grass. Once you have fuel you can tap a button and activate the power mower to … mow down the zombies. This power up only lasts for so long, though you can use keys to upgrade these tools.

Here’s my problem with the game.

Keys are used for everything. Not only can you use them to upgrade items, but you can also use two keys to “buy” fuel in the level to activate the power up. This would be great if you got more than a maximum of three keys for clearing a level. And you can’t go back and beat a level over to get another key. I tried. Once you get the three keys from a level there’s virtually no real point in going back.

The only other way of obtaining keys is by collecting coins. While you do get a key for every 200 coins you collect, they don’t add up very quickly. For example if you play the first level over and over you’ll get one key after beating the level about 4-5 more times. Harder levels will reward you with more coins, though it will take much more time and energy to collect them.

This isn’t an RPG. I don’t want to grind for coins to collect keys to in turn buy upgrades.

The first upgrades aren’t too expensive. Between 2 to 10 keys each isn’t bad. But when I tried to upgrade my health and add extra lives I saw the upgrade cost jump to FIFTY keys. And that’s just for one upgrade. Upgrading anything sees this cost skyrocket, and some of the power-ups which can be boosted can be done so nearly six times. The game has four sections, each with ten levels. With a maximum of three keys per level that gives you a total of 120 possible keys. I don’t understand how you can upgrade much of anything with that. It appears at least that it’s nearly impossible to max out any of the upgrades in the shop, especially if you’re spending keys on fuel.

And another thing that this game does, which bugs me to no end in every game that does this, is using the (B) button to exit to the menu from the pause menu. In nearly every game ever made pressing the (B) button returns to the level from the pause, but in The Grumpy Reaper this instead exits back to the title screen. Countless times while playing the game, I paused and then returned only to accidentally quit out of the level.

The game does have some charm to it and was fun to play in spurts, but as much as I wanted to love this game, unfortunately it wasn’t that great.