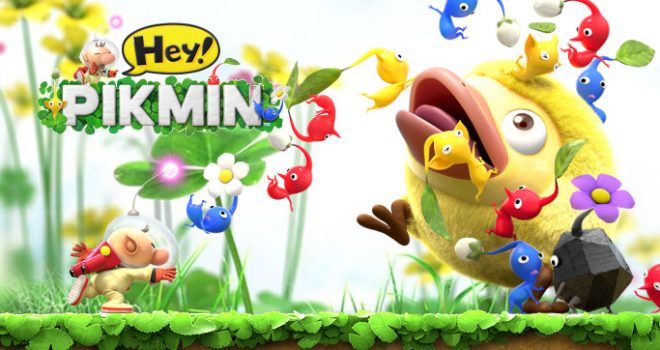 I’ve never really played Pikmin before. While I’ve played the Pikmin level from Nintendoland and I have played the demo for Pikmin 3 on the Wii U, I haven’t sat down and started up a game of Pikmin from the beginning before. Luckily there is no prerequisite experience necessary for Hey! Pikmin, the spinoff title for the Nintendo 3DS. Like many Nintendo pieces the game is a stand alone tale and you don’t need to have played any games in the series before.

After crash landing on this new planet Olimar is tasked with the seemingly insurmountable task of collecting 30,000 units of Sparklium in order to fuel up his space ship and escape the planet. Luckily there are also Pikmin on this planet which he can use to help him reach his goal. Pikmin are tiny, curious, plant-like creatures. They come in different colors and types, each with different strengths and weaknesses, but they all seem eager to help Captain Olimar.

Hey! Pikmin is a side-scrolling adventure which is a departure from the 3/4 overworld view from previous games. It’s a nice shakeup of the franchise and definitely gives the game some freshness. For the most part Olimar is pretty vulnerable on his own. He can’t really jump although he can hover for a little bit with use of some thursters on his space suit. This does allow him to reach some special areas but otherwise he’s very vulnerable to the creatures in the world. Luckily this is where the titular Pikmin come into play.

After discovering the Pikmin in each level he can corral them to his side with a blow of his whistle. They will then follow him around religiously and go with him everywhere. Olimar can pick up and toss Pikmin to reach special areas, attack enemies, and also collect Sparklium to bring back to him. It’s a nice mechanic and is in line with previous games in the series. Just take heed that Pikmin can die if you let them get scooped up by an enemy and they can also be lost if you leave them behind.

With Olimar’s distinct lack of jumping ability the levels have been designed beautifully. Unlike someone like Mario where one’s first instinct would be to run, jump, or perhaps wall jump to reach a high area, Olimar doesn’t have that option. An area just out of reach is usually somewhere obtainable but requires some more thought or further exploration to get to. There area also areas that you may not be able to reach once you pass a certain point or make a change to the level.

There are a varity of different kinds of levels in the game including underground and underwater levels where Olimar must swim around.

In each of the levels there are two or three collectibles which help add to your Sparklium total. If Olimar can’t get to these items himself he can toss some Pikmin to carry them to him. If you don’t have enough Pikmin with you then the item might not be obtainable. Worse off since these items are usually hidden there are times that you might miss an item and not be able to get back to it. Of course every level is replayable so you can always go back into the level and try again.

Like any good Nintendo title the game is also compatible with amiibo. The game was released with an accompanying amiibo. Using the new Pikmin amiibo or the previously released Olimar amiibo will call more Pikmin to Olimar when he’s out on an expedition. This can make it easier to solve puzzles or tackle enemies, especially if you’ve lost a few Pikmin along the way. You can level up the amiibo at Pikmin Park by collecting Pikmin and tapping the amiibo while there.

Other select amiibo are also compatible with the game. When you tap in compatible amiibo figures, you can open up Secret Spots on your map. These spots give you a puzzle to solve and the chance to earn a bunch of Sparklium.

Since Hey! Pikmin is an AAA Nintendo title the game looks beautiful, is full of charm, and features an outstanding soundtrack. The music is both relaxing and soothing in the exploration levels but can also be energetic and intense in boss battle levels.

Hey! Pikmin could have easily been made for the Nintendo Switch and I fully expect that Nintendo will port the game to their mainline home/portable console in the future. I fully enjoyed this grand tiny adventure and it is a must play. If you enjoyed the previous Pikmin titles or like a little side-scrolling action puzzle platformer then this is definitely up your alley.