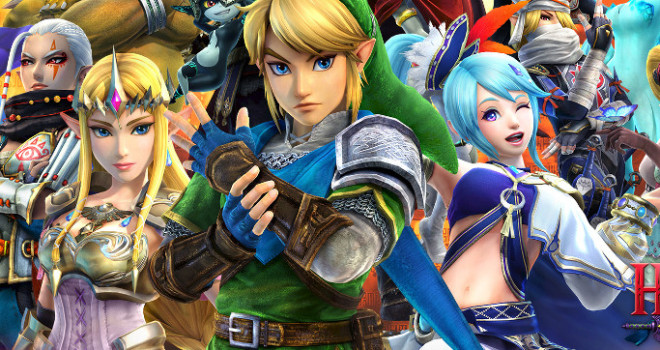 Since the launch of the Wii U one of the things that fans have been clamoring for is another game in the Legend of Zelda series. Surely since the Wii U is the first Nintendo console to support full HD they would get one, and fast. Sure there was the HD remake of Wind Waker from the GameCube days, but people really wanted a brand new Zelda title. Heck, the Wii got two Zelda games in it’s lifespan.

So it was a bit of a shock when Hyrule Warriors was unveiled. It’s a Zelda game but at the same time unlike any other game before it. Zelda is monster fighting and dungeon exploring, boss fighting and princess rescuing. It’s a single player experience with action scenarios spaced out with a lot of exploration and puzzle solving. That’s the hallmark of what a Zelda title is, since the very first incarnation on the NES.

Hyrule Warriors is nothing like those games, which may be a disappointment to some. I however really enjoyed the game. It’s not what I’m used to with a Zelda title but it is great fun in it’s own right.

Hyrule Warriors is a co production between Nintendo and Koei Tecmo and mixes the Zelda characters and universe with the hack-and-slash gameplay from the Dynasty Warriors series. It successfully marries the over the top combat style of the latter with the familiar characters and environments we’ve seen countless times in previous games in the Zelda series. So what’s the plot of the game? Well, the delicate balance of the Triforce has been disrupted by a dark power that could tear Hyrule Kingdom apart. The Sorceress Cia has begun her conquest of Hyrule. Great armies of good and evil are clashing. As the conflict unfolds and objectives change, you use special weapons and items to fight your way through hordes of enemies. You can even find materials on the battlefield to upgrade your characters and weapons for future battles.

The game, in Legend story mode, is split up into levels. The game isn’t one long progression but is set up in missions. And this time you won’t be going it alone with just Link but can play as a multitude of other characters depending on the level/mission. From Link you’ll also get to play as Impa, Sheik, Princess Zelda herself as well as a number of other unlockable and downloadable characters.

You will also get to choose from a range of weapons as well in each level. For example Link can use his traditional Master Sword or he can also use a fire rod. Depending on the level, and the nature of the enemies, it may be beneficial to use a weapon of a certain element.

The game uses a combo system where you hit one of two attack buttons, and depending on the combination of buttons you will perform different attacks or combos. Between missions you can forge badges by spending rupees and using items dropped from monsters during battles. Some of these badges are for support, but others are used to learn new combos and unlock stronger attacks. The combos are pretty straight forward and simply use the a combination of the two buttons so there isn’t a long list of button commands to memorize. The battles themselves are very chaotic, which makes the game quite fun. And what’s more most of the hordes that you hack and slash through aren’t much of a challenge. Though scattered through the levels are some captains, who are a bit more formidable and can do a bit more damage.

The levels are split up between your base and the enemy base. One of the defeat conditions for most stages is to make sure that your own base doesn’t fall. So you’ll have to keep a keen eye on that and look out for calls for help from the other commanders during the stages. They may call out for help and alert you if things are looking bleak for your base.

This can actually force a lot of strategy into the game as well as a lot of frustration. The “life bar” on your base is based on the number of defeated soldiers you have in the base. There is no way to restore the that “life bar” so the damage taken is irreversible. The other commanders on your side though can be helped. If their life bar is starting to wane you can run to them and restore their health by entering the green circle that surrounds them. If they run out of life they will “flee” from the battle. And again if this is a defeat condition then you may lose the battle even without losing your own life.

So it’s fair to say that it’s good to have a lot of soldiers on the battle field. It can help you take down the hordes.

At times though it’s pivotal to control certain ones. One thing that is pretty neat about the game is that it contains local two-player cooperative mode with one player using the Wii U GamePad and another using a monitor. You can also switch between difficulties in each mission in case you are having too much trouble getting through. Hyrule Warriors is also compatible with amiibo figures, with figures based on The Legend of Zelda series unlocking additional content such as new weapons. Nearly every other amiibo figure can be tapped in the game as well (up to five daily), which will give you daily bonuses of rupees or other items.

As you might expect with ANY Zelda game the music is top notch. All glorious orchestral music with a hint of rock in some of the themes. But one thing that felt a little lacking is that all of the dialogue during the battles is limited to text. It’s odd since the prologues to each level are fully voiced and narrated. I wonder if it’s due to the continuing trend of not having Link speak in one of the games. I would have definitely more enjoyed full voices in the game.

In addition to the main campaign of Hyrule Warriors (Legend Mode), these story chapters can be replayed with any character in “Free Mode”. The game also includes “Adventure Mode”, in which you explore a map based on that of the original The Legend of Zelda and complete specific objectives, such as defeating a certain number of enemies within a time limit or completing a mission with a specific character and weapon. An update released on the game’s launch date added “Challenge Mode”, which encourages players to collect as many rupees as possible in a set scenario.