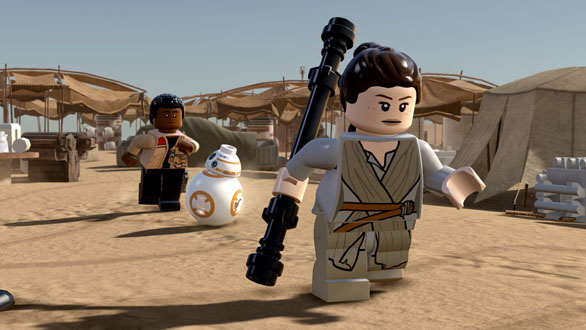 LEGO games have gone through many adventures. It’s a hit phenomenon that has even spun off a “toys to life” NFC game with LEGO Dimensions. The main franchise has kept a good track record of adding new content instead of just rehashing the tried and true gameplay. Sure, LEGO games feel familiar, but if you look back to the early days they really have come a long way.

In LEGO Star Wars: The Force Awakens, the franchise adds some new and interesting goodies to once again expand upon that experience. Obviously the main reason to pick up this latest release is to play through comical renditions of the movies memorable scenes. It may seem like there wouldn’t be much content just drawing from one film, but TT Fusion has added enough interesting content along the way to make it feel like you’re playing the adventure, rather than just watching one movie play out. 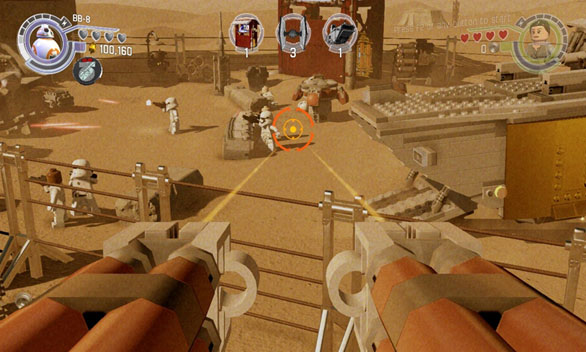 One of the biggest additions that has fans excited is missions that expand the story of The Force Awakens. The first unlockable sees Poe Dameron rescuing Admiral Ackbar from a Star Destroyer. Gold Bricks unlock this content and it makes replaying old levels worthwhile to get these new stories. It’s actually quite a nice reward instead of just getting one bonus level at the end of the game after gaining 100% or what not in previous titles. Most of all, it’s the new content that you’ll want to see so it makes it a draw to want to get those levels open.

As noted above, it’s the additions that really make this yet another LEGO title that’s worth picking up. For one, there are first person shooter scenes. That’s right! A LEGO game with FPS moments. They’re more like Gears of War really, but that shouldn’t scare any parents away from picking up the game. Naturally everything is still in a light hearted LEGO style. It just means characters take cover behind obstacles and can pop out into first person mode to blast away at some nearby storm troopers. Auto aim typically gets you right on target, but you can aim around as well to blast around the environment. 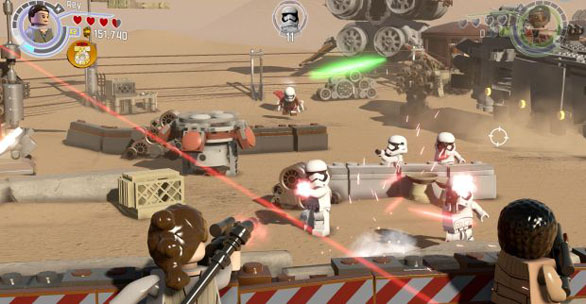 Using scout binoculars is a fun little addition as well which allows certain characters to go into first person to find weak points on enemies or hidden objects. The view finder beeps quicker and closes in two arrow icons to indicate when you’re on the right track. It’s a basic addition, but still something that adds variety to the gameplay. Other things like computer hacking which focuses on a couple matching games, or even language translation with C-3PO gives gamers different things to focus on.

The Force Awakens like many Star Wars movies focused on visiting many planets. Of course this makes including a free roam world something a bit more difficult. TT Fusion did find a way to include that experience as well though! Throughout your adventure there are free roam areas to explore in the different sections. One even sees you completing tasks around the Millennium Falcon. Like with many games, this gives a sense of home locations that feel calmer and familiar between all the battle scenes. There’s gold bricks to find in these places and new characters to recruit to use in free play, so they’re enjoyable to wander around. 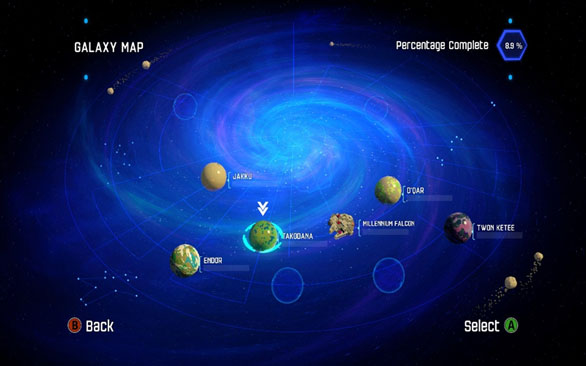 Like with many LEGO games, Dimensions included, I always play them multiplayer with my wife. LEGO The Force Awakens usually has that spinning split screen that decides where you are in relation to the other player and splits the screen to give you both the largest view of your area. When you get close to each other, the view merges together again. I think in freeplay areas it’s split down the middle of the screen though since you can wander a lot further in those levels. It’s good to see that the co-op experience still remains strong.

There is vehicle combat in the game as well. So you’ll occasionally take to the skies and blast away at incoming fighters. Both sections where you’re constantly flying in one direction and all range battle arena style combat is included. These are typically quite fun and even allow the second player to take over rear facing guns on the Millennium Falcon. The only down side I found was that it was hard to shake some enemies that had flown into formation behind you. That’s probably just me though not being sure what to do. 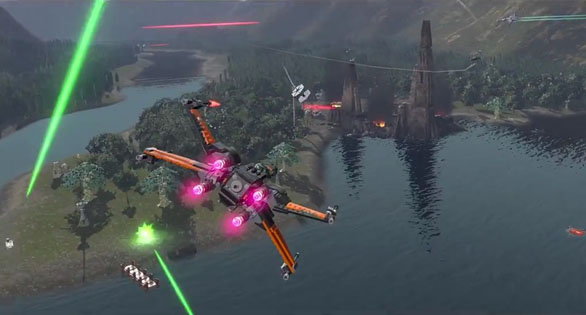 As has become the norm with LEGO games as they progress through the years, boss battles are typically puzzle based. You’ll try to find objects to destroy or build around the area to deal some damage to the enemy. This is great since it adds more to what would otherwise be a quite basic beat ’em up section. It makes boss battles an event instead of just another enemy to fight.

One thing I did notice was that puzzles never really became too frustrating in this outing. The very rare time in previous LEGO games you could get pretty lost on what to do or even have a glitch leave a puzzle unsolvable. I think in all our time we had one puzzle that tripped us up a bit, but probably in single player we would have received a bigger hint from the computer controlled characters doing their part instead. As a co-op team, that focus fell on us and we had to work together to figure out what to do. So all in all not a bad thing, and certainly an improvement over those rare frustrations of the past. 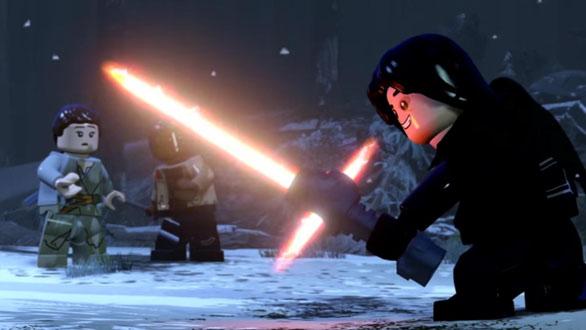 We also found stud collection to not be that much of an issue this time. Sure, you do still need to break everything and collect as much as you see to get your True rating in a level, but it didn’t feel like we were going to not accomplish that. There was only about one level we didn’t get enough studs on before unlocking our x2 red brick multiplier. Even then, by the time we unlocked that red brick it only took running through one level to have the studs to purchase it. So for that strategy, the game is very well paced out.

Multi-builds are the other new gameplay feature which we both loved and hated at times. Basically they are piles of bricks that can be build into more than one object. That object can then be destroyed and rebuilt into one of the other forms. I admit, there were times that characters would indicate that you needed to build a different object first instead of what you did make, but at times it felt like a chore. We weren’t too sure what would do what. Also playing co-op limited the multi-build outlines we could see at times. I don’t think we ever couldn’t see one on screen, but it did lead to us just holding in one direction to see if we could build left, right or center. In general they are fun. But any time we weren’t sure if the object we made was what we wanted first, it kind of slowed us down. Multi-builds aren’t bad, and it’s a clever idea considering it is an actual LEGO feature for the real brick sets you can buy. We just wished that you could get more hints to speed things along or even build more of a story around the puzzle. Yes, I get that it would detract from it being a puzzle however. Perhaps even a small title under each multi-build could have helped so we could see things like, “Water tank”, “Pump”, “Power source”, and decide which was important to build first. 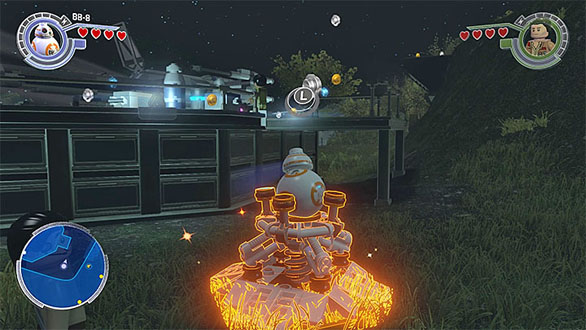 Overall the game is great! There’s lots going on, enjoyable moments with a wide variety of characters, and a good mix of gameplay that keeps each level entertaining. Some previous games could feel a bit exhausting in longer levels, but thanks to mixing things up with the first person shooter like sections and aerial combat, the levels kept us interested. There’s a lot of fun to be had here and the season pass adds even more interesting levels into that mix. LEGO TFA is a worthy addition to the Traveller’s Tales games and this one celebrates the return to the Star Wars universe. 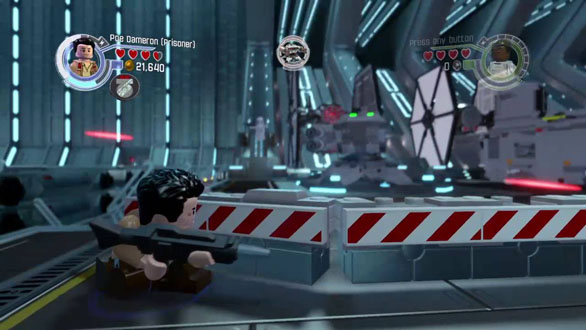