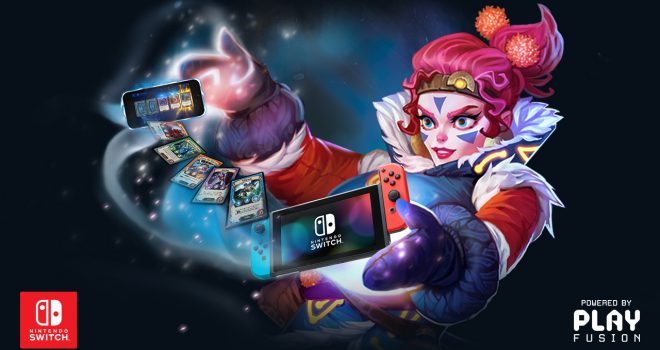 To be honest I had seen Lightseekers at my local Toys’R’Us store for a while. (Yes, in Canada the Toys’R’Us chain is alive and well.) I didn’t really pay it that much mind even though it was nestled in the electronics section right near the videogames and the display was set up very much like Skylanders and Disney Infinity had been before. Big colourful displays and packaging were prominently displayed but, as I’m primarily interested in Nintendo fare and there was nothing screaming Nintendo about it I didn’t take a second look at it. I didn’t know what it was or what it was about.

Lightseekers is a combination collectible tabletop trading card game as well as electronic card battle game. The game itself feels very much like a marriage of Hearthstone and Skylanders Battlecast. Hearthstone is a free online card battler by Blizzard that doesn’t have a physical gameplay component. Skylanders Battlecast was also a free online pseudo card battle game but actually had physical cards you could buy via booster packs. These physical cards however were mostly for show as you couldn’t actually play with them in the real world as the gameplay functionality didn’t lend it self to tabletop. Lightseekers feels like the best of both.

Lightseekers has hundreds of cards available. The game is broken into six different orders, each of which has three elements. You’ll pick a hero from one of the orders and then build a deck of five combo cards and thirty action cards. The combo and action cards have to share the elements that are shown on the hero card to be played, though there are also unaligned cards which can be wielded by any hero. Each hero has a unique trait that makes each one distinct. A hero may be able to heal once per turn, dish out damage when certain conditions are met, allow you to draw cards, and many more active and passive abilities. 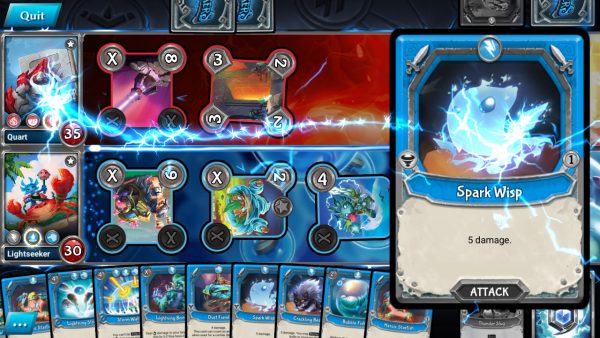 Each hero has three elements visible on their card. You can only play one card of any one element once per turn, unless the hero is proficient in that element. This is shown on the card with a glowing ring around that particular element.

You can take up to two actions during each of your turn, which includes playing an action card or activating the ability of your hero or other cards in play. When you have taken your two actions your turn is over. Unlike most card games where you draw to start your turn, in Lightseekers you draw at the end of your turn but only if you haven’t spent all of your actions. For example if you play one card or use one ability and then end your turn you get to draw one card. If you pass on your turn then you’ll draw two cards.

Combo cards take more than one element to use them. To use a combo card you must discard enough cards to pay the cost of the card. These cards are not put in the discard pile but instead shuffled back into the deck. Playing a combo card takes up two actions though, so it has to be played at the start of your turn and can’t be taken as the second action. When you do play a combo card you draw a card at the end of your turn.

In addition to action cards there are also buff cards, which can also be combo cards. These cards are persistent and stay in play for a set number of turns. They can inflict damage during turns, heal your hero, block attacks, boost the effectiveness of attacks or healing, cause your opponent to remove buffs or discard cards, and many more abilities. Some of these cards have numbers in their corners. These cards rotate counter-clockwise at the start of your turn and activate an ability that is written on the card. When they rotate all the way to an empty corner they are discarded.

Buff cards add en extra layer of strategy to the game. You very often have to change up your strategy or modify your plan of attack when buff cards are in play.

One frustrating element in Lightseekers is the fact that the game will let you do things that result in no actions, thus penalazing you in the process. For example if you have a card that has the ability to “rotate one of your action buffs” you can play this card even if you don’t have any action buff cards in play. This results in you discarding a card and wasting an action. As a beginner trying to understand how all of the classifications work, throwing away an action in the late stages of a battle can be very frustrating. 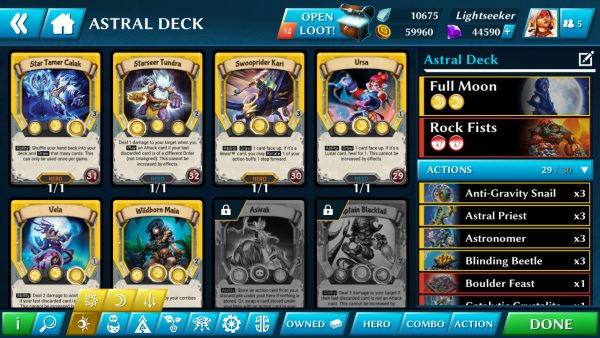 Lightseekers is the first card game of its type to come to the Nintendo Switch. Other TCGs like Pokémon Trading Card Game and Magic the Gathering have been around on tabletop for a while, and they have made the transition to PCs. Pokémon is also available to play on tablets. Of course the leader in the space is the digital powerhouse Hearthstone which has been around on PC and mobile devices for a while, but none of these three big names in the card battle space have come to the Nintendo Switch.

With the game available on mobile and Switch you can link your account between the two platforms, allowing you to pick up and play on your mobile device and then onto the Nintendo Switch.

In addition to casual and ranked online play there are also campaigns and challenges, which are definitely a challenge. Whereas in regular matches both you and your opponent start off evenly matched, in some of the challenges the AI opponent starts with an advantage of buffs already in play. And of course the deck that your opponent has is powerful and the odds are stacked against you. Beating the odds in these campaigns takes some skill and a whole lot of luck.

The game right now is only playable on Nintendo Switch in handheld mode. This way of playing makes the most sense as it is played completely with touch screen controls just like if you were playing it on a mobile device. However the developers are working on an update to the game to allow for controller and docked mode support. This is great and it will be interesting playing the game in this new way, but I didn’t even realize that there wasn’t support for docked mode at first as I have only played it in handheld mode myself.

One challenge that the game also has is that you’ll need a persistent internet connection to play the game. Even in single player mode where you’re just in practice mode playing against the CPU, an online connection is required. So unless you’re in an area with Wi-Fi or you have a mobile device handy to tether to, you’ll be out of luck. Of course in that case you can always log onto the game on your mobile device and play, however not needing to be online to play what should be an offline mode is a bit of a pain.

Card battle games is a genre on the Switch that I was missing and I’m glad that Lightseekers has come to Nintendo’s system to fill the void. Despite some of the issues mentioned above the game is fun to play and has more depth and strategy than on the surface.