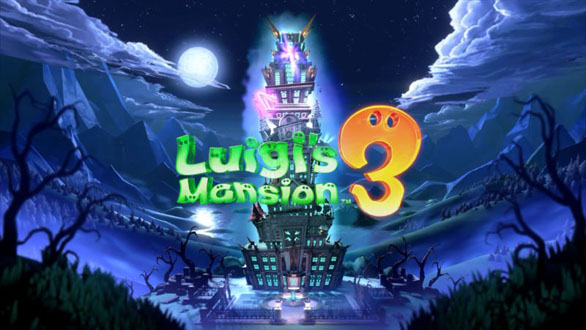 Besides Pokémon, there isn’t much coming out this holiday season from Nintendo. So it could be easy to overlook Luigi’s Mansion 3 as a gimmick if you’ve never played the series before. Instead, what’s inside is a very fun triple A title! Obviously everyone is going to want Sword or Shield when they come out, but Luigi’s third ghost hunting adventure isn’t one to pass up! If anything, this is the next big Nintendo title to own for the Switch.

The story starts out with Luigi and friends heading off to a luxury hotel for a vacation. This is told fantastically. The game even starts with a beautiful daytime view of the hotel that looks quite idyllic. Shortly afterwards it turns out your host isn’t who you thought and Mario, Princess, and the Toads end up trapped in paintings. The only one who manages a harrowing escape is Luigi. Well, and his ghost dog companion.

His ghostly canine companion also works as a waypoint. Guiding you toward your goal as you progress in the game by barking at doorways, or vanishing through walls. Dr E. Gadd is even back with something new to help Luigi on his way. In fact, it’s a sort of slime clone of Luigi called Gooigi. He basically works as a secondary Luigi to pass through bars and such to help solve puzzles. It’s a really good gimmick that adds to the variety of ways to get things done.

For those new to the series, Luigi basically has a vacuum which turns the world into a delightful physics playland of “What can’t I suck up?” Next thing you know you’re pulling down drapes, cleaning cobwebs, and everything else that’s not nailed down. All that to get coins and… dollar bills! Surprisingly there are dollar bills in this Mushroom Kingdom expanded universe game, and you can even slurp those up with your vacuum to gain more funds. That’s not all it can do either. Get a pumpkin stuck to the end of the vacuum and you can then switch to blow mode to launch it! More options unlock as you go and that just allows you to find more goodies like gems hidden throughout the hotel. Of course the hotel is haunted, so the vacuum can be used to trap ghosts as well. Luigi’s device also comes with a flashlight. Use a burst of stored energy to create a flash and ghosts become physical creatures. Turn on that vacuum and it becomes a tug of war to lower their health. You can even slam them around, or into others. Finally, you suck them up. Other enemies can hurt you too like mice, who look adorable struggling to not be vacuumed up.

I haven’t got into the multiplayer modes yet but so far the main game is just great! You progress by finding new elevator buttons that have gone missing. Each time they float up and slot back in for you. Exploration is a ton of fun and there’s so much to see.

I think the most exciting thing is that the game is genuinely creepy. Like it isn’t going to keep kids from playing it, but there are some actual moments that stand out in the spirit of the theme. I was looking through a crack in the wall once and a spider crawls right across the screen. Other moments involve cute things popping out of drawers. Then when everything goes dark and sideways things like Bowser claws replace them. The whole atmosphere is very well done. The sense of exploration and backtracking also make this feel in a way like a Resident Evil title. That is a very good thing. It’s very enjoyable continuing around the hotel and the narration keeps the story going.

Luigi’s Mansion 3 is another must own for the Nintendo Switch. I figured it would be a fun side adventure, but no, it’s a fantastic title that stands proudly on it’s own. This isn’t filler until we get the good stuff we’re waiting for. This is a game you should be getting right away! It’s great to watch together with family and friends. I rarely give games a perfect score, and there is the odd hickup when you’re trying to vacuum something and it gets stuck on another object. But regardless, this game is just pure fun!

I don’t want to spoil it either, but the device E. Gadd gives you to communicate with him is pure comical genius.