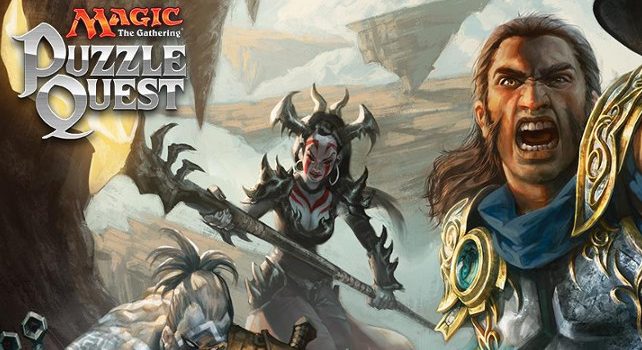 There are a lot of puzzle games, and even more of the matching gem style puzzle games. While Candy Crush seems to be the most well known game in the genre, I think the very first one that I ever played was Bejeweled.

For the most part they’re pretty much the same thing. You match up gems of the same colour of three or more and they vanish. You then collect points and more gems fall to fill in the void. If the falling gems make more matches then you get a combo, more points, and so on. The goal for these games are mostly high score.

Later on games started adding in other elements to these games such as RPG battles to extend the life of the games. No longer was the matching of the gems merely the goal of the game but a means to an end. The gems could be used to gain points which could be used to power fighters or other things. I reviewed a mobile game a while back called Spirit Stones that did this well, as did Puzzle and Dragons Z + Super Mario Edition for the Nintendo 3DS. 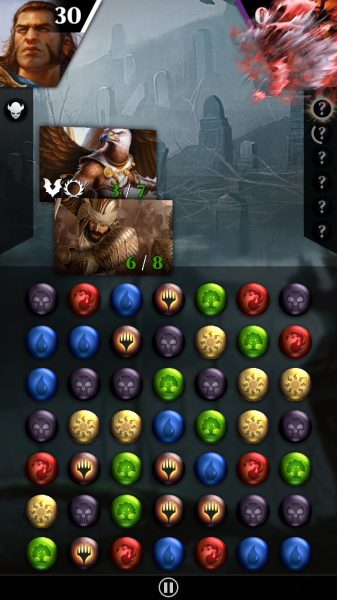 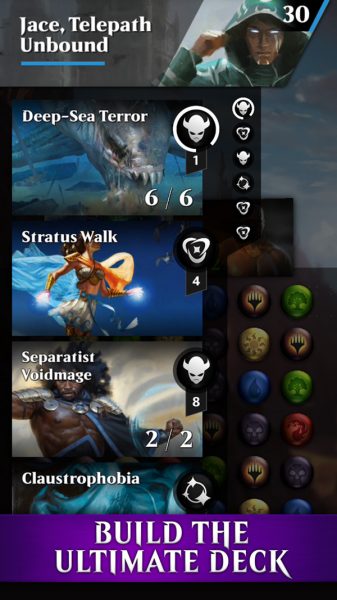 The latest game that I’ve discovered came out just over a year ago on mobile. The game is a very fitting infusion of Magic the Gathering into the Puzzle Quest series.

Magic The Gathering – Puzzle Quest takes elements that make both games great and create a slick mobile experience that is a natural compliment to both franchises.

In Magic The Gathering – Puzzle Quest you are put into the role of one of several Planeswalkers that fight against a number of enemies including other Planeswalkers. You start the game with a single Planeswalker, though you can purchase more later. As in the Magic card game, each Planeswalker is tied to a specific mana or colour. So you can only use green creatures, spells, and abilities if your Planeswalker is also green.

You play with a ten card deck, filled with creatures, spells, and support cards. You can customize what cards you play with in your deck, or you can select the option to have the game suggest cards to swap in and out. Similar to the real-world Magic card game you’ll need mana in order to cast your cards. You do this by matching the gems on the game board. While you can only actively use cards of the same colour as your Planeswalker, you can match gems of any colour on the board. However the points you get will vary.

Each Planeswalker has different abilities which can be unlocked as you level them up. These can be unleashed during your turn in the game when you have earned enough points through the battle. You slowly earn points while matching mana gems and more quickly earn them when you match Planeswalker gems. The abilities can do everything from giving your creatures enhanced stats on the battlefield, dealing damage to a creature or Planeswalker, or even discarding cards.

As in the tabletop card game, you begin each turn by drawing a card. You can then arrange your cards in your hand any way you please. Cards at the top of your list will gain any mana acquired from matching gems first, and if you match more mana than a card requires, the next card in your hand will also start to be powered up. You can power up pretty much all of the cards in your hand in a given turn if you clear enough gems.

Once a card has been powered up it will be played automatically. If there is an action which you need to take, such as selecting a card to be affected by the card, the game will prompt you do this before the card is played. If you don’t want to activate the ability, or want to hold off on using the card, you can select “not now” from the option. You can also preemptively tap the spell icon on the card to prevent the card from being cast as soon as it’s powered up. 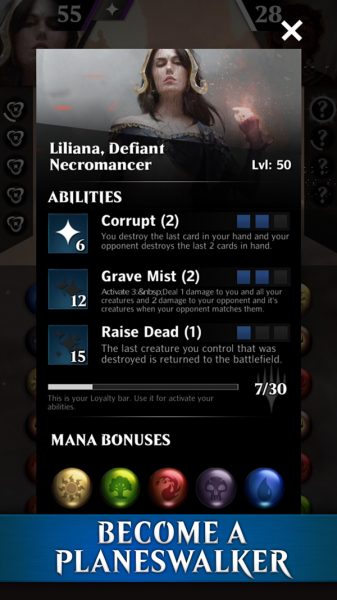 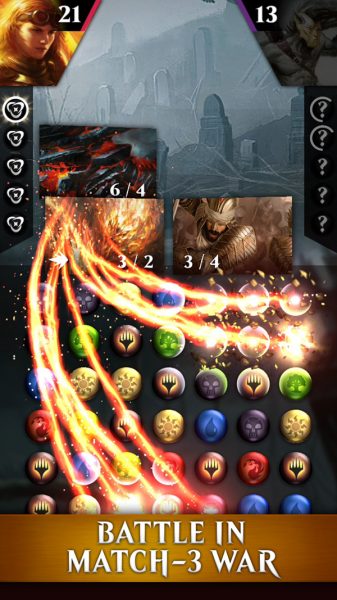 After you have matched all of your gems and activated all of the cards your creatures will attack if they can. Much like the original Magic the Gathering, creatures have summoning sickness when they are first cast and have to wait a turn before attacking. This is of course unless they have the “haste” ability.

All of the card abilities and designations are included in the cards like the real world card game, however some of them have been slightly modified to fit into the box of Puzzle Quest. Also included in this game is all of the art from the physical cards which look just as amazing as their real world counterparts.

As a player of the real game, who is still somewhat of a novice, about the only thing that I didn’t like in this game is the speed at which some of the events happen. While the Magic Duels game on Steam lets you look at each card carefully and slowly, MTG Puzzle Quest is very fast paced. Too much so, in my opinion. There are many instances where an opponent’s card is flashed on the screen for a fraction of a second and then an effect takes place, leaving me unsure of what happened and why things transpired the way they did. It definitely makes for a confusing time and steepens the learning curve when you aren’t sure what happened.

About the only other frustration I had was with the timed PVP events. In many games you are paired up automatically by the game based on your level. Not so in MTG Puzzle Quest. With my level 5 – 15 Planeswalkers, I was consistently matched up with level 60+ opponents. I was outmatched and outgunned from the start in many player versus player events, and victories were more of a fluke than anything else.

I did appreciate however that these weren’t live PVP battles and you face off against a computer-controlled opponent with the deck and stats of another player.

Any damage incurred in a match carries over to the next and you’ll have to wait out for your Planeswalker to heal. They heal about 6 HP for every five minutes you wait, which isn’t bad. You can also spend to heal them instantly, though pro-tip you can fully heal your Planeswalker by leveling them up.

As with any free-to-play mobile title MTG Puzzle Quest has some pay-to-play elements.

There are daily login bonuses on magic runes (regular currency), mana crystals (premium currency), and booster packs. You can also get a free three-card booster pack every eight hours. You can spend the premium in-game currency on booster packs and new Planeswalkers, and spend the magic runes on leveling up your Planeswalker. While you can generally earn some modest mana runes and crystals by playing the game, you can also boost up your currency with some real world cash.

Overall I really enjoyed Magic The Gathering – Puzzle Quest. The touch screen controls can be a little wonky at times, but overall it’s a lot of fun. It looks stunning and the music is identical to the official Magic Duels game. If you enjoy the Magic The Gathering card game or are looking for something different with the match-3 genre of mobile games you should check this one out.