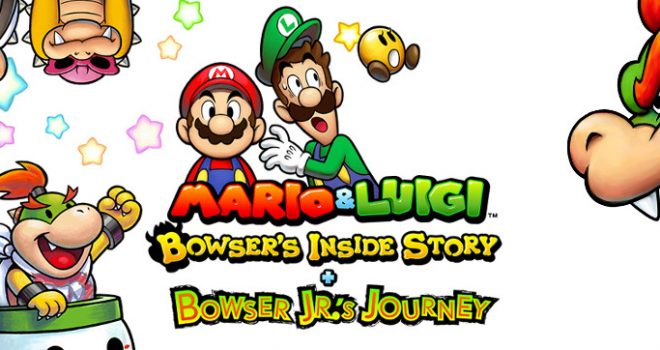 The Mario & Luigi series of role-playing games are a lighthearted and silly series of games. This latest release of Mario & Luigi: Bowser’s Inside Story + Bowser Jr’s Journey for Nintendo 3DS, which is a re-release of the original DS title, continues the series and is just as silly as before. In a good way, though.

The game is split into two separate yet intertwined quests. The sinister Fawful comes to the Mushroom Kingdom and a mysterious illness befalls the Toads. They come down with a case of the Blorbs which causes them to balloon up. When Mario and Luigi come in to help investigate, Bowser attacks and is swiftly beaten by the Bros. The defeated Bowser retreats to the forest and then is tricked by Fawful into eating a bad mushroom, which sends Bowser into a dizzy rage back to Peach’s castle inhaling everything in sight along the way including Mario, Luigi, and Peach herself.

All while this is going on Fawful is completing his master plan to take over the Mushroom Kingdom, Peach’s Castle, and Bowser’s Castle too.

The game alternates between side-scrolling platforming with the Mario Bros. and 3/4 overhead view adventure with Bowser. Think of the difference in the views by comparing the way The Legend of Zelda usually looks (Bowser) coupled with the way that Zelda II (Mario & Luigi) looks.

Mario and Luigi are stuck inside Bowser and they navigate in the same way that any classic Super Mario Bros. game would as the Bros. move from left to right and jump to attack. However instead of a jump and a victory a turn-based RPG battle starts upon impact and if you happen to initiate the battle you’ll get off a quick attack before the turns start. While in the start of the game you’ll either pilot the Mario Bros. or Bowser, you’ll be able to swap between them at times. In fact there are some times that what you do as Bowser will impact the Bros. or vice versa. It’s also possible at times to have Mario & Luigi leave Bowser and enter the overworld as well to allow you to jump and get to areas that Bowser can’t reach.

As in previous games the battles themselves are active. Instead of a back and forth turn-based battle, when you attack you can inflict more damage with correctly timed button presses. For example when you use the jump attack you will jump on your foe. However if you press the button again just as Mario or Luigi lands on the enemy they’ll get off a second jump. The same can be said about their other attack options with good timing. In the same way when you’re on the receiving end you can dodge or counter attack if your timing is right.

Battles with Bowser on the top screen act the same way, though Bowser’s attack arsenel is different. He’s got a wicked punch and fire-breathing attacks, as well as that inhaling trick that he learned from Fawful.

Speaking of Fawful a great amount of the humor in the game comes from the villain. The writing of the green alien baddy is spot on and hilarious, as is a lot of the dialogue and actions in the game. While the Bros. themselves don’t have any dialogue and mutter incoherent sounds during conversations, the dialogue of other characters surrounding them as well as some of the silly physical humour in the cutscenes are pretty funny.

Included with the original Mario & Luigi: Bowser’s Inside Story comes a new game called Bowser Jr’s Journey. This new game runs in parallel of the original game and follows Bowser Jr. After Bowser leaves for Peach’s Castle, Bowser Jr. and the other Koopalings try to take on the challenge of finding a cure for the Blorbs. A mysterious trio arrive at the castle and sell the Koopalings the cure for the Blorbs, which means that they must set off in a quest to find the ingredients for the cure. The demanding and commanding Bowser Jr. leads the way in the search.

The new mode is a departure from the main game so it contains fresh gameplay mechanics. Instead of turn-based roleplaying battles you’ll lead a team in squad-based combat. Like the Fire Emblem series there is a weapon triangle in the battles. Melee troops are strong against ranged attackers but are weak to flyers. Ranged attackers are strong against flyers but weak to melee troops. You’ll build a team of combatants filled with Goombas, Koopas, and a variety of other creatures that you’ll recognize from the main game. This mode is pretty fun and is for the most part hands off. Before each battle you’ll see what you’re up against, which allows you to pick and choose which troops to select for the battle. You’ll have a maximum of nine to choose from and can set their position on a grid layout. Depending on their placement you may get a nice stat bonus. You can also set another of the Koopalings as your lieutenant which can give you another boost as well as an in-battle bonus.

While the battles are for the most part hands off, meaning that you get to sit back and watch the battles unfold, you do get a little bit of control. During battles your troops may instigate a more powerful or combined attack. When this happens, much like the original game, some well timed button presses can give you a better attack. In the same way you’ll be able to use some of your “commander points” during the battle to try and stifle your opponents attacks, give your squad a little boost, or even help them heal up a bit.

Visually the game isn’t too impressive though the soundtrack of the game is pretty good. There are a lot of classic tunes you’ll recognize that have been remixed in a new way as well as some new classic music. It’s a pretty fun soundtrack.

The game is also compatible with amiibo. Tapping compatible Mario series amiibo will yield items that can be used in game such as mushrooms, star candy, and more.

Mario & Luigi: Bowser’s Inside Story + Bowser Jr’s Journey isn’t a super difficult or in depth role-playing adventure but it continues the fun gameplay style that the Mario & Luigi series has become known for. The game has plenty of charm and some fun moments and some funny dialogue. It’s a genuine hoot to play.